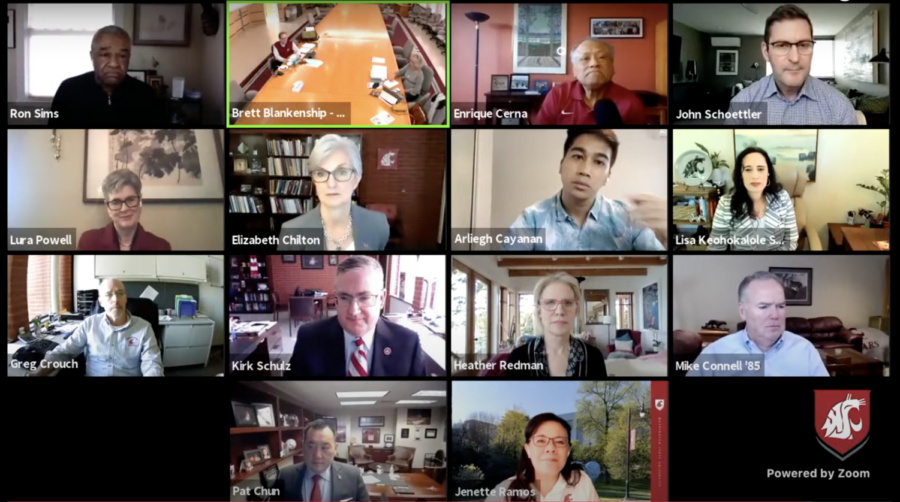 Originally, the university was expecting a loss of $54 million in revenue. The increase can be attributed to the loss of revenue in WSU Housing, Dining and Student Auxiliary Services, said Stacy Pearson, vice president for finance and administration.

In addition to discontinuing ACT and SAT tests, the WSU Board of Regents received updates regarding university finances and the restructuring of the WSU system during their two-day meeting Thursday and Friday.

WSU’s temporary decision to waive the ACT and SAT is now permanent. The WSU Office of the Provost proposed the change, Powell said.

The sentiment to move away from standardized tests has been building for a long time, particularly because of concerns for implicit cultural bias. The tests result in inequities among racial and ethnic groups, Powell said.

WSU Housing and Dining rates will not be increased for fiscal year 2022.

“This was a recommendation based on feedback given to us by student leaders and students themselves about the need for us to be cost-conscious this year,” said Mary Jo Gonzales, WSU vice president of student affairs.

The average cost of room and board for a double room and level 2 dining plan is $11,319, according to the meeting minutes.

Stacy Pearson, vice president for finance and administration, said the university is forecasting a net loss in revenues of approximately $62.2 million for fiscal year 2021.

Originally, the university was expecting a loss of $54 million in revenue, she said. The increase can be attributed to the loss of revenue in WSU Housing, Dining and Student Auxiliary Services. The parking services forecast a loss of $2.3 million, she said.

The projected net loss for athletics is $31.6 million because of canceled football games across the conference. The no-fan policy for athletic events led to the elimination of ticket, parking and concession revenues, Pearson said.

The biggest financial impact stems from the fact that WSU did not play 14 of the 45 required games by its TV contract. WSU Athletic Director Pat Chun said WSU men’s basketball did a good job navigating COVID-19. Out of all the contracted TV games, the basketball team completed 97 percent of their games.

Ticket sales are important for Cougar athletics. Chun said the budget is built on a 90 percent renewal rate for football season tickets.

“Everything is really hinged for our budget going forward is where we’ll be in terms of attendance restrictions,” he said.

Pearson said it is important for the department to live within its budget.

“If we’re able to solve this and [athletics] live within their budget, then that’s good for everybody,” she said. “It just puts the whole university in a better position.”

Crouch said faculty members do not believe giving those funds to athletics serves the core mission of the university. He said departments are competing for dollars in an unknown environment and faculty members wished they were better informed about various decisions, he said.

“There’s nobody that’s diminishing athletics or its contribution to the undergrad or to the student experience at WSU,” he said.

WSU Athletics agreed to a 10-year, $11 million sponsorship agreement with GESA Credit Union for the naming rights of the playing surface in Martin Stadium, Chun said.

The board approved the agreement and the facility will formally be called GESA Field at Martin Stadium starting July 1, he said. Funds will support general operations of Cougar athletics. There are opportunities within the agreement for additional GESA donations in the future.

Chun said the deal will not impact existing sponsorship agreements with BECU and U.S. Bank.

“To our best knowledge, this will be the largest roll one-time commitment we will have received in Athletics,” he said.

WSU President Kirk Schulz said the university received feedback about concept papers regarding One WSU and the restructuring of the WSU system.

“There were a couple issues that came up on those papers that caused some real concern, legitimately by our campus community,” Schulz said.

In response, WSU Provost Elizabeth Chilton and Schulz addressed the feedback by making necessary modifications to the plan, Schultz said.

Having a well-constructed system will enable the university administration to handle government relations, financial administration, human resources and fundraising better, he said.

“How do we make sure that we take some of the good positives that have come out of the pandemic, and make that part of our normal operational style? What things we need to change and go back to the way we did things before,” he said.

There is a team of faculty members, staff, students and administrators putting together a revised budget proposal for how WSU budgets as a system. Schulz said he expects a preliminary version of the proposal will be released in May.

WSU Tri-Cities Chancellor Sandra Haynes gave the regents an update about the Tri-Cities campus. She said enrollment for the campus is a challenge.

“Unfortunately, we expect this trend to continue for a while given the community enrollments across the state, actually across the nation, dropped during COVID,” she said.

Haynes said she believes the decline in enrollment is because people have additional responsibilities like work and family on their plate amid the pandemic.

Haynes said underrepresented students got hit the hardest during COVID-19.

“The hunch is that they needed to turn their attention otherwise to other, bigger priorities than school,” she said.