Can you guess the Catch Phrase? 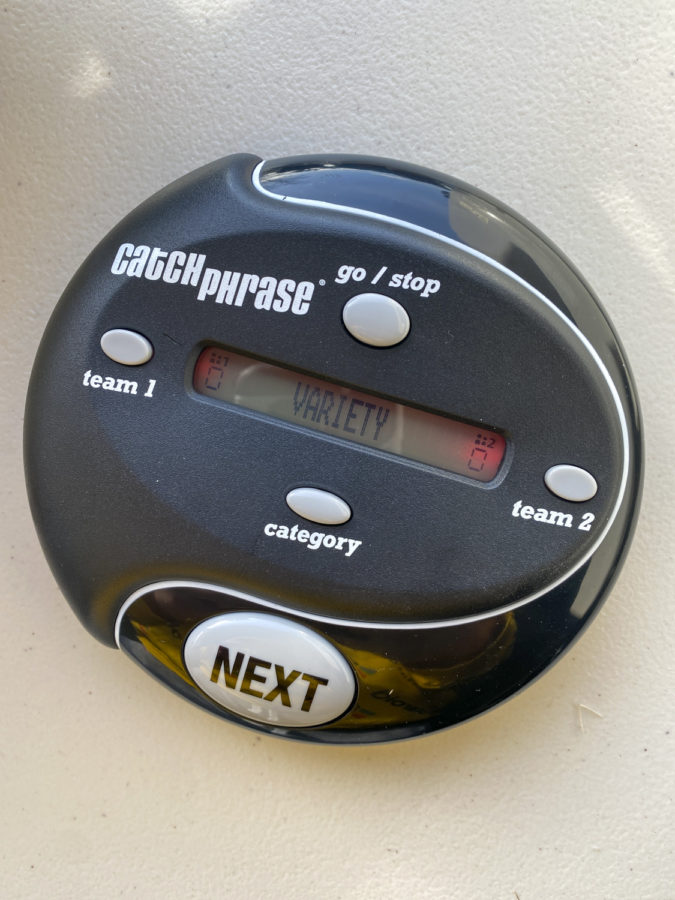 When the buzzer for Catch Phrase goes off, pass to other team. Continue going back and forth until one team reaches seven points.

Exhilaration and disappointment, all controlled by the all-consuming, increasingly rapid beeping of one word-producing device. Catch Phrase is the game for those who would like to increase their heart rate without having to move. This fast game of word association will keep you engaged and sitting on the edge of your seat.

You will need enough people for two teams, each having a guesser and the person on the hot seat. Players will sit in a circle with every other person being on the same team. Players need to sit close enough to be able to pass the device quickly.

To turn on the game, press the Go/Stop button. Then, as a group, decide on a category to play. There is entertainment, everyday life, fun and games, the world, and variety. When I play with friends, we prefer variety as it is the most random.

The player must then use any hand movements or verbal hints to get the other people on their team to guess the word or phrase. Players with the device cannot say words that rhyme with the word, the first letter of the word, or any part of the word. Players may skip words by clicking Next, although this will increase their chance of the buzzer going off on them.

Once the team members have guessed the word, the player will click next and then pass the device as quickly as possible to the person on their right. As players guess words and press next, the beeping from the machine will get progressively faster until it signals the end of the round.

Whoever holds the device when it beeps for the last time loses the round for their team. The opposing team scores a point, which can be recorded on the game device. Play then continues with the last person holding the device. The first team to score seven points wins the game.

I love this game because it is very portable and gets everyone involved at parties. It fosters teamwork and works as a fun ice breaker.

My family has also played this game with our exchange students, who have had fun being challenged by the phrases they may not have seen before. It is recommended for people twelve and older.

Catch Phrase can be purchased at Walmart for $20.

If you have played Catch Phrase or try it out after reading, comment your experiences down below!