Search for the greatest: Master Of Puppets

This week's album under review is by Metallica; album resides in the Library of Congress National Recording Registry 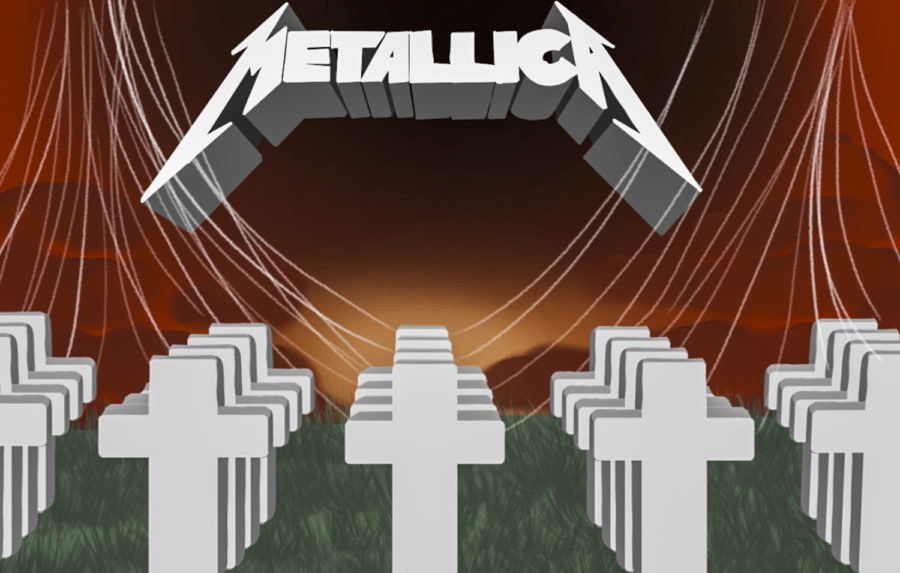 Metallica spent time in Denmark creating this album to grow their musical styles.

When it comes to the core of metal music, there are a plethora of points in its development that helped throw the genre into the spotlight. Bands like Black Sabbath, Judas Priest, Iron Maiden and more helped set the foundations for metal to sprout from its roots. However, it is impossible to talk about heavy metal without mentioning one particular band. This band became responsible for pushing metal’s composition boundaries as far and as fast as they can go.

Metallica is a popular thrash metal band originating from Los Angeles, California. The band’s founders are vocalist and guitarist James Hetfield and drummer Lars Ulrich, who met through an advertisement Ulrich put in a newspaper. By 1985, the band also consisted of guitarist Kirk Hammett and bassist Cliff Burton.

After the release of “Ride the Lightning” in 1984, the band wanted to expand upon their sound. Wanting to improve upon the sound of acoustic parts of the album, the band traveled to Denmark to record a new album. The band worked with Danish producer Flemming Rasmussen and began recording material at Sweet Silence Studios in Copenhagen, Denmark. The band officially released “Master of Puppets” in 1986 to widespread acclaim.

Most of the album’s songs and certain sections of tracks are distinguishable from one another. The album contains acoustic sections, slow-paced melodic sections, slow distorted riffs and blistering thrash sections. Some of the best tracks on this album include “Battery,” “Welcome Home (Sanitarium),” “Orion,” and “Master Of Puppets.”

The intro to “Battery” calmly puts the listener into a serene mood before launching them into a sudden flurry of angry guitar licks and Hetfield’s loud vocals. The sudden switch in tempo is incredibly abrupt and helps set the tone for the rest of the album. The lyrics mainly follow themes of assault and violence, hence the title of the track.

“Lashing out the action, returning the reaction

Weak are ripped and torn away

Hypnotizing power, crushing all that cower

Battery is here to stay”

“Welcome Home (Sanitarium)” is the darkest of the album’s tracks. The lyrics are about a man’s abuse while trapped in an insane asylum, inspired by the book and movie “One Flew Over the Cuckoo’s Nest.” The calm, clean intro and the melodic solos provided by Kirk Hammett create a mystical atmosphere that truly captures the essence of the lyrical content. Then the song blasts into a more fast-paced section.

“Welcome to where time stands still

No one leaves and no one will

“Orion” is an instrumental piece that showcases the godlike skills of bassist Cliff Burton. The distorted bass riff near the beginning of the track and the relaxing melodies of the song’s middle section help cement Burton’s legacy as a god among bass players. Sadly, during the album’s promotional tour, Burton died in a tour bus accident in Sweden at the age of 24. “Orion” is a true staple of his marvelous ability and is one of the better tracks on the album.

However, none of these tracks compare to the title track, “Master of Puppets.” I could spend an entire day writing about the majesty of this song. Almost every riff in the song is incredibly catchy and heavy. Everything from the iconic intro to the verse riff is intricately composed to make the listener want to headbang. The lyrical content of the song regards the effects of drug use. Simultaneously, the song is also an expression of human manipulation for the sake of political or social agendas.

Twisting your mind and smashing your dreams

Blinded by me, you can’t see a thing

Just call my name ’cause I’ll hear you scream”

Everything on this album from the composition to the politically-charged lyrics is incredibly well written. The album is arguably the most exceptional in the entire history of heavy metal, so important that the album resides in the Library of Congress National Recording Registry. It should be a federal crime to not headbang at least once to any of the tracks on this album.