WSU freshman forward Andrej Jakimovski had ups, downs in first year, glad to be in Pullman 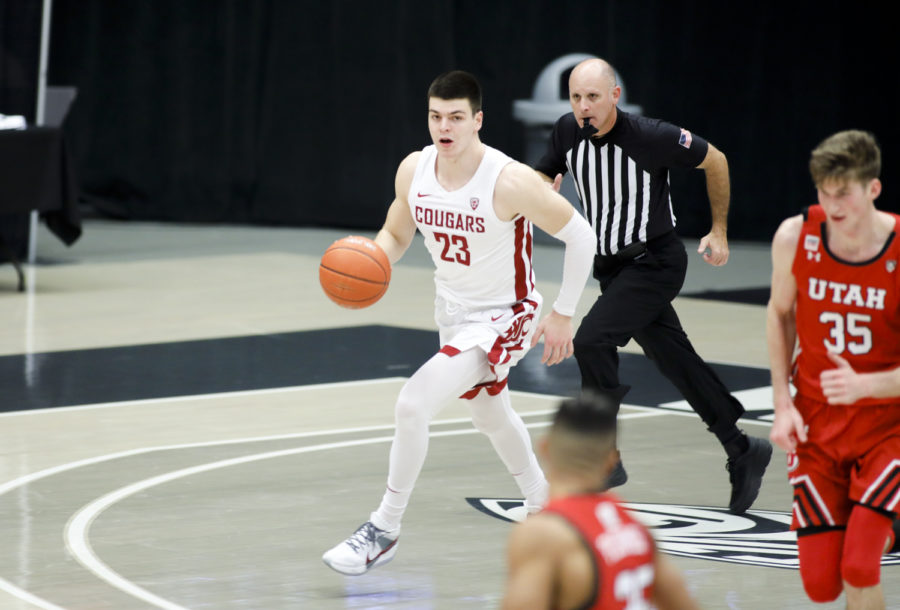 Freshman forward Andrej Jakimovski drives the ball down the court as he looks for teammates against Utah on Jan. 21 in Beasley Coliseum.

After a memorable season to say the least, one of WSU’s top recruits in program history reflects on his freshman season.

Freshman forward Andrej Jakimovski’s recruitment thrilled Cougar fans coming into this season as the point forward, sharpshooter from North Macedonia was bound to take WSU to new and exciting territories. However, if WSU fans remember correctly, his collegiate career had an above average beginning.

After scoring just six points in his first three games, the third game being his first career start, Jakimovski averaged over 10 points per game in the following eight contests, while shooting over 40 percent from the three-point line. In the eighth game during this span, he achieved a WSU career high 19 points in a road loss to Stanford.

Compared to playing professional players in his previous league, Serie A2 in Italy, he said the competition was certainly stronger in the Pac-12 and it was a process to adjust to that change in pace.

“All the players are more athletic and faster, in Europe it’s more like a team sport,” Jakimovski said.

Once it seemed like Jakimovski had a good grasp on the atmosphere of Pac-12 basketball, his streak of poor performances started. He would average just over two points per game in the next eight game string. On top of it all, after the eighth game, he would endure a groin injury that sidelined him for two more games.

Jakimovski said it felt weird to go so long without consistently making shots, but his coaches and teammates encouraged him to keep his head up and keep working on his game. But personally, Jakimovski did not want to settle with this type of play.

“I didn’t need to prepare physically on this stuff, I just tried to focus on my mentality before my games,” Jakimovski said.

Jakimoski’s teammates and coaches describe him as a gym rat who’s never satisfied and always strives to be better. Often times after a game, Jakimovski would go back out onto the WSU court in Beasley Coliseum to go through shooting drills and Steph Curry-like dribble workouts to further improve his game.

Junior forward Aljaz Kunc shares a unique bond with Jakimovski. Kunc, who is from Slovenia, speaks Serbian and will often communicate with Jakimovski, who also speaks the same language. Kunc said this bond helped Jakimovski get comfortable as Kunc himself had to go through the same transition when he came to America.

“I feel like it was good for him, too, to have someone like that,” Kunc said. “The team this year was really close in general, I feel like everyone was close with everyone.”

Towards the end of Jakimovski’s recovery, he said head coach Kyle Smith discussed with him that he should take on a point forward role heading into the team’s back-to-back home games against Cal and Stanford. This was mainly due to the thin backcourt that WSU had at the time as starting point guard Isaac Bonton was out with a pair of ankle injuries. However, Smith believed this role for Jakimovski would be the best adjustment for him and his abilities.

Smith said Jakimovski’s day-to-day work ethic is unbelievable and about as good as a freshman can get. This motor from Jakimovski shows Smith that this is exactly why he wanted him in Pullman in the first place.

“That’s an area where he can hopefully become that point forward type player where he can really help us in that capacity,” Smith said.

The weekend of Cal and Stanford came around and Jakimovski, needless to say, silenced the doubters. Against Cal, he returned to the starting lineup for the first time in over two weeks and finished the night with 11 points, nine assists, and seven rebounds, a near triple-double.

Then against Stanford, not only was it a double-overtime thrilling win for WSU, but Jakimovski finished with 11 points, nine assists, and six rebounds across 52 minutes played, the second most minutes played in a game by any Coug this season.

Jakimovski said he had no idea he was so close to a triple-double against Cal, but he was more so happy that the Cougars defeated the Golden Bears by 31 points. However, against the Cardinal, he confirms that it was the craziest game he’s ever been a part of throughout his entire basketball career.

Jakimovski said winning that Stanford game with limited fans in the stands made the victory that much sweeter. He felt more like a “Coug” in that moment.

“I kind of feel the vibe here in Pullman,” Jakimovski said. “After the game, I was walking down the street, and all the people [would yell] ‘Go Cougs!’, I felt the energy of Pullman. It was really nice.”

As the 2020-21 season wrapped up and WSU suffered a first-round exit in the Pac-12 Tournament, Jakimovski finished the year averaging 5.5 points per game across 25 games played and 19 starts.

He said his shooting percentages were too low and he didn’t attack the basket enough this season and he wants to change that moving forward. This offseason, he wants to develop his finishing ability at the rim, as well as get his body in prime condition to avoid any more injuries.

Kunc said the sky is the limit for Jakimovski after playing just one season with him. Jakimovski has the ability to take basketball to the next level and his potential shows that he’s on a path to do so, Kunc added.

“We can all see the potential, it’s now up to him to put all the elements, put all the great games he had, and be consistent with them.” Kunc said.

In terms of a season report card for Jakimovski, he gets an ‘A’ according to Smith. Despite having the high expectations and the brief period of struggles, Smith believes.

“I thought he did well, I think his offensive efficiency will catch up,” Smith said. “He got a lot of the heavy lifting out of the way. What you need to do to play at this level, to get on the court, to be competitive, there’s more to be gained.”

Despite getting offers from other Division I colleges such as Utah State and Georgia Tech before signing with WSU, Jakimovski is certain that he’s in the right place. With goals of playing professionally either overseas or in America, he believes WSU is the place where he can work on making those dreams come true.

“I think I made the right decision,” Jakimovski said. “Couldn’t be more happy that I chose to come to Pullman and play for coach Smith.”