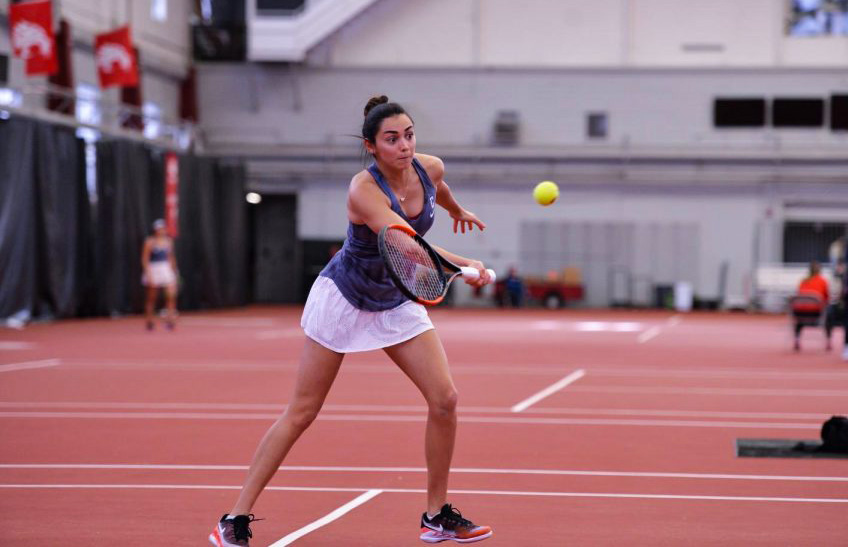 Fifth-year Melisa Ates has a singles record of 8-4 on the season.

The WSU tennis team will be hosting the Eastern Washington Eagles for a doubleheader at 11 a.m. and 3 p.m. Saturday in Hollingbery Fieldhouse.

WSU (8-6) is coming off of a three-match week against Utah, Arizona State and Arizona. After beating Utah 4-1 on Thursday, the Cougars split their series against the Arizona schools after losing to Arizona State 6-1 on Saturday and beating Arizona 4-2 on Sunday.

In their win over Arizona, the Cougars captured the key doubles point on the final match to enter into the singles matches with a one-point advantage.

WSU dropped two matches in a row to give the Wildcats a sense of hope, but sophomore Pang Jittakoat sealed the deal by winning her match in three sets to secure the victory for the Cougars.

The Cougars have historically dominated Eastern Washington in the past, with an overall record of 15-0 since 2006.

After their match against the Eagles, the Cougars will head south to face the Stanford Cardinal on March 26 and the Cal Golden Bears on March 27. Both of these matches will be on the road in northern California.

Don’t miss Cougar tennis in action on Saturday as they take on the EWU Eagles at 11 a.m. and 3 p.m. Saturday on the Simmelink Courts in the Hollingbery Fieldhouse. The statistics can be followed live on StatBroadcast, while the match can be live-streamed on the WSU Athletics website.