Soccer is back after 18-day break 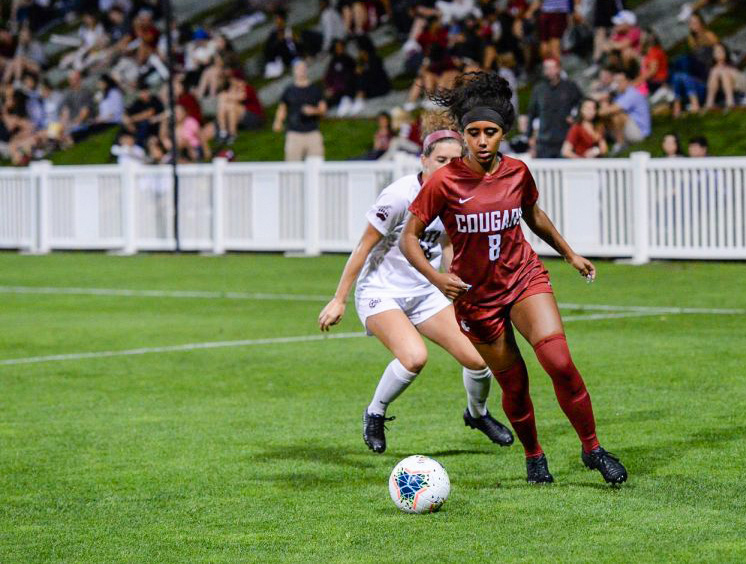 Sophomore defender Rose Young dribbles the ball in front of a defender as she looks for open teammates.

The No. 13 WSU soccer team is back in action against the Washington Huskies at 7 p.m. Friday in Seattle.

“We’re excited to be back,” head coach Todd Shulenberger said. “Were looking forward to this opportunity to go play this very good Huskies team.”

This first match in Seattle is considered an out-of-conference matchup. The second game on April 16 in Pullman will count towards their conference record.

WSU will be looking for redemption against the Huskies (5-1-2, 2-1-2), as their loss in their last matchup in 2019 ended a 15-game unbeaten streak for the Cougars that dated all the way back to 2003. The Cougars hold a 14-8-7 advantage all-time against the Huskies but hold a record of 5-6-3 when on the road in Seattle.

The offense for the Cougars has been dynamic so far this season, as they have scored 11 goals in five games with six different scorers, including a pair of first-time scorers.

Freshman forward Margie Detrizio has had a huge impact for the Cougars, scoring two goals and assisting on two more in her first five collegiate contests. The Arizona native is second on the team with six total points.

Senior goalkeeper Marissa Zucchetto has played a huge role for the Cougars by holding a scoreless streak of 427 minutes, which is the longest streak since 2014. Zucchetto is playing in her first season in the crimson and gray, as she transferred from Texas Tech before this season.

Senior forward Elyse Bennett has proved to be one of the best in the Pac-12 with a strong start to the beginning of the year. Bennett has scored five goals in just five games, which is second in the Pac-12 in goals, while her 1.00 goals per game rank first.

Bennett, a Wisconsin native, posted her first multi-goal game against Utah last time the Cougars were on the field.

Don’t miss out on the Apple Cup action this weekend when the Cougars take on the Washington Huskies at 7 p.m. Friday at Husky Soccer Stadium. The match can be livestreamed on the Pac-12 website and the statistics can be followed on StatBroadcast.