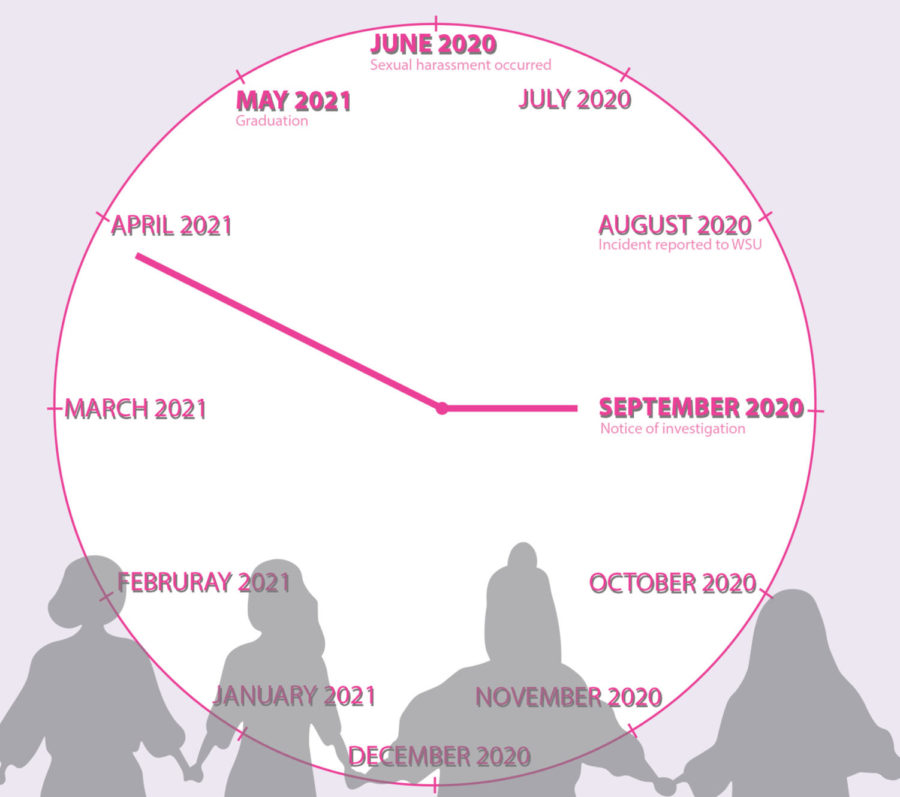 Time is running out for four students who filed a sexual harassment report to WSU’s Compliance and Civil Rights as they are graduating this year.

Editor’s Note: This article contains themes of sexual harassment, which may be triggering to some people. The women featured in this story asked to remain anonymous to prevent retaliation against them and any interference in the WSU Compliance and Civil Rights’ investigation. An asterisk identifies a source’s name has been changed to protect their anonymity.

Four WSU students are calling for justice after awaiting action in a sexual harassment investigation that started about seven months ago.

The individual who committed the sexual harassment, John*, was friends with the women. Addy said she felt betrayed by John’s actions.

“This was somebody I called my friend, somebody I invited into my home,” she said.

Addy said she struggled to sleep at night and ensured she blocked John on social media because she did not want to relive the experience.

After submitting the report, each of the women did a Zoom call with CCR staff where they learned about their rights and what the investigative process would entail, Addy said. CCR investigators also interviewed them.

“Since the very first initial Zoom call, we’ve had no communication about that,” she said. “It’s really not moving forward at all. We’re still in the same place we were as day one.”

CCR sent the notice of investigation Sept. 16. Addy said CCR staff gave them investigative updates only if the women contacted them. Staff gave them the same exact response in their emails.

WSU senior Ava* said communication with CCR started off well before quickly deteriorating about a month into the investigation. The minimal amount of communication and continuous lack of response from John was frustrating.

The only reason stated by the investigator for the prolonged investigation is because of John’s lack of response, said WSU senior Hailey*.

WSU senior Emily* said she wishes CCR was upfront with the women about how difficult the process would be and the likelihood of proving their case.

“I know it’s hard when people don’t respond,” she said. “Even if someone who’s accused doesn’t respond, that feels like an admission of guilt.”

Hailey said she believes CCR and the university need a policy in place to stop people from not responding and subsequently waiting for the case to blow over.

Emily said she was last in contact with CCR about four months ago. She was contacted and talked to twice throughout the investigative process so far.

Addy said she has not heard anything from CCR since Feb. 2.

“It kind of feels like it’s never gonna see the light of day,” she said. “We’re never gonna get justice for what happened.”

Ava’s last contact with CCR was Dec. 15. She said she submitted additional evidence to CCR.

In late September, WSU PD contacted Ava and she gave the department her statement about the incident. WSU PD forwarded her statement to Pullman PD, but she said she did not receive any communication from them.

Addy said it is frustrating for her and the other women to wait months for the investigation to move forward, especially because victims of sexual harassment are told to come forward and report their experiences.

“We did exactly that and it’s still being brushed under the rug,” she said.

For the investigation’s outcome, Hailey said she wants to see John expelled from WSU. Expulsion would make it more difficult for John to transfer to another university.

However, time is running out because John and the women are graduating this year, Addy said.

“It’s pretty shitty to have these guys out here think that they could just get away with that,” Hailey said. “They kind of are like getting away with it because nothing’s happening.”

At the start of the process, an investigator gathers as much information as possible before sending a notice to both parties. Notices include the allegations and a statement saying CCR is proceeding with a formal investigation, said CCR director Holly Ashkannejhad.

There is no deadline for both parties to respond to the notice, she said.

“We try to work with students to the extent possible,” Ashkannejhad said. “We know that students are busy. If things go on too long, we will push and say we really need to wrap this up because the longer it goes, the more it impacts both parties.”

There are two pathways to resolution. One is a formal investigation with a trial. The other is an informal resolution where all parties agree to a particular outcome, Ashkannejhad said.

Ava said the women involved wanted to go through with a formal investigative process.

“You cannot just informally resolve something like this,” she said. “I think that sends a bad message and kind of continues with this kind of, you know, stay silent kind of feeling and culture that we have.”

After compiling evidence, both parties are given access and the option to provide an additional written statement with any information that is not correct and was not originally included, Ashkannejhad said.

Before coming up with a recommended finding, Ashkannejhad said investigators go line-by-line and assess whether they have enough evidence to support the allegations.

“For Title IX cases, we don’t actually make a final finding,” she said. “We just say we think there’s probably evidence to support a violation.”

Finally, the case is sent to the WSU Center for Community Standards. The center determines whether the case goes to a conduct board hearing or a conduct officer hearing before deciding the final outcome of the case, she said.

If the student accused of misconduct is about to graduate, the university can put a temporary hold on their account until the investigation is complete. The conduct board decides how the hold might impact their graduation, she said.

Lack of participation from a party slows down the investigation because it takes CCR more time to receive responses from those who do not want to provide statements, Ashkannejhad said.

CCR only shares aggregate information with police departments, she said.

“We don’t say this person was assaulted by this person, but we say we had six sexual assault reports to our office so they can count that information,” she said.

There is a lot of information individuals are not comfortable sharing with the police. However, Ashkannejhad said CCR staff does give students the option and will facilitate the exchange if prompted.

“I can imagine with other women or other people who come forward with these kinds of cases, feeling discouraged and feeling like, okay whatever, I just want this done. I don’t want to think about it anymore,” she said.

Emily said WSU should have more resources for women who experienced sexual trauma or mental abuse.

“I just never thought I’d feel so unsupported with something like this,” Emily said. “I’ve received support from the other women who had to go through it, but they shouldn’t have to give you that support.”

CCR’s policies are not that effective because the investigation has been taking months without much progress, Hailey said.

“It makes me question every other case they’re probably facing. I don’t know if they’re giving anybody justice,” she said. “What’s the whole point if they’re not doing anything.”