Volleyball loses in return to court

Team will wrap up regular season next weekend against Arizona Wildcats 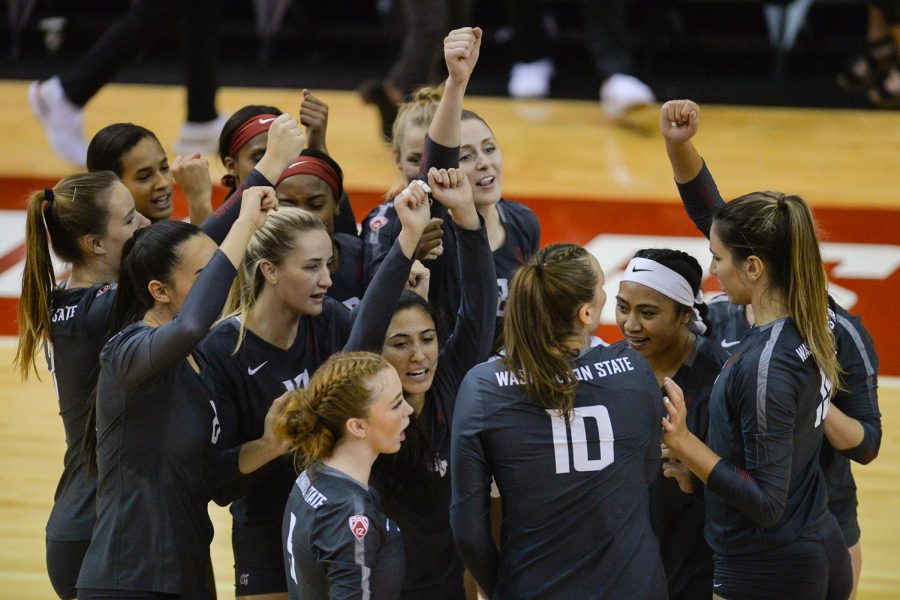 The women's volleyball team celebrates after a win against UT Arlington on Sept. 13, 2019 at Bohler Gym.

The WSU volleyball team fell to the Utah Utes 3-0 on Sunday.

After their last three matches being canceled, WSU was finally able to play their first match since the one against Oregon State on March 14.

The Cougars traveled to Salt Lake City to take on the Utah Utes. Two matches were scheduled; the first one was canceled but the second one was played on March 28.

Going into this match, WSU was ranked 13th nationally and 10-2 while the Utes were ranked 12 and 12-4. WSU is still leading the Pac-12 with two matches left in the regular season and a high chance of going to the NCAA volleyball tournament.

In the first set, the Cougs and Utes were evenly matched. Freshman setter Argentina Ung was able to get things going offensively for WSU with three kills in the first seven points.

Utah was able to pull away and grew their lead to 22-15. Senior outside hitter Penny Tusa and redshirt sophomore setter Hannah Pukis were able to fight their way back to 24-18. The Cougars ended up falling in the first set.

Freshman outside hitter Julianna Dalton led the offensive attack along with Tusa and Martin. WSU saw a strong defensive effort from Ung and Williams, which gave the Cougs the lead. Utah went on a 4-1 to close out and claim the second set 27-25.

In the third set, the Utes went on a quick 7-1 run, which led WSU to take a timeout to regroup. The Cougs rallied back to close the gap to 11-10.

Tusa, Martin and Ung fueled the scoring run. However, the Utes came storming back and had a quick five consecutive points and led 16-10.

The Cougs took another timeout which led to a 4-0 run for WSU, sparked by a block from Pukis and Martin. The scoring gap was closed to 19-17, but it wasn’t enough and the Cougs fell for the third and final time 25-19, completing a 3-0 Utes sweep.

Ung and Martin both had their first starts for the Cougars in this match against the Utes. Ung led the team with 10 kills on 16 attacks, three errors and ended the match with a .438 hitting percent. Ung also added two blocks and two digs.

The WSU volleyball team will take on Arizona for the final two matches of the season. The Cougars will play on April 1 at 6 p.m. and April 3 at 12 p.m. The live statistics can be followed on StatBroadcast.