WSU class teaches students how to deal with death

Professors believe there will be a grief pandemic; almost 5 million people expected to be grieving lost loved ones because of COVID-19 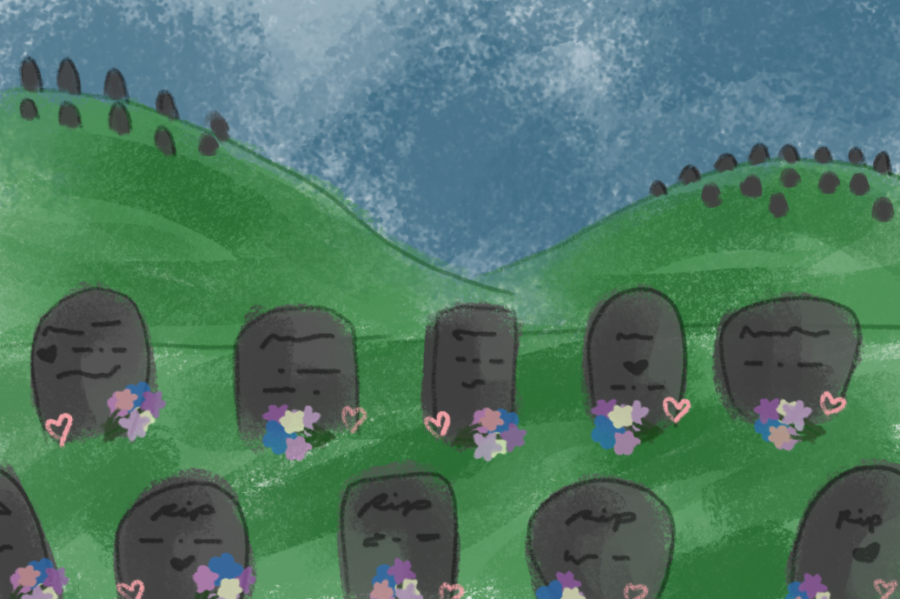 Over 545,000 people in the U.S. have died from COVID-19, according to the U.S. Centers for Disease Control and Prevention’s COVID Data Tracker.

From early ages, children are censored from death. Death is not death. Instead, death is taking a long nap or moving to a farm upstate.

This censorship sheltered a lot of children, who are now university students, from understanding and experiencing death and grief. COVID-19 changed that for a lot of students.

Life expectancy is longer now, so it is not uncommon for university students to have never attended a funeral or lost anyone close to them, said Cory Bolkan, human development associate professor at WSU Vancouver.

On average, every one person who dies from COVID-19 leaves nine people behind grieving that death, said Raven Weaver, human development assistant professor at WSU Pullman.

Over 545,000 people in the U.S. have died from COVID-19, according to the U.S. Centers for Disease Control and Prevention’s COVID Data Tracker. This results in over 4.9 million people grieving the loss of a loved one in the country.

There will be a grief pandemic after the COVID-19 pandemic, Weaver said.

There is no wrong way to grieve, she said, and it is a lifelong experience. Grief is not something to work through but to work with because it does not go away.

It is common in this society to be expected to “be over it” in a matter of weeks if not days, but that is not how grief works, Weaver said.

“As a society, we’re taught to hide our emotions in a way to work through it — ‘It’ll get better,’” she said. “But we know that grief can rear its head at any point, at any time period away from the moment of grief.”

Death is taboo in America, Bolkan said, so people are not taught how to grieve or cope. That is isolating because it is hard for people to be around those who are grieving, she said.

“We don’t talk about death, we’re also socialized in a lot of ways to be stoic,” she said. “‘Don’t cry, move on’ — you carry this burden is a very American kind of pull-yourself-up-by-your-bootstraps mentality.”

Different work organizations tend to offer bereavement leave for employees, but those are not long, usually about three days, Bolkan said.

There is no “going back to normal” after death, Bolkan said.

“We have to find a new way to live and move forward in a world that’s completely different,” she said. “Your world is not the same, that person that was important to you is no longer there. It’s a totally different world.”

This is the same case with the pandemic, Bolkan said. Maybe going back to normal is not great, she said, maybe it can be a transformative opportunity to build something new.

“With loss, you can also think about change,” she said.

“I think a big piece of this class is, we’re all human, you know, death is a part of life,” she said. “We try to normalize that.”

There are different types of death beyond just physical death, which is when the body ceases to operate, Weaver said. This is a “big death,” but there are also little deaths, which range from loss of a friendship to loss of a home country. It is anything that results in loss and feelings of loss.

“Even though this class is called ‘Death and Dying,’ we really are talking about loss and loss is a universal human experience,” Bolkan said. “Thinking about death and mortality are certainly very unique human experiences.”

One of the classes’ assignments is writing and anonymously sharing letters depicting the students’ experiences with loss, Weaver said. This helps create a supportive environment in the class and eliminates bias.

Weaver said people should err on the side of kindness and show compassion toward others. However, it is also important to not minimize one’s own feelings.

There is a death positivity movement that advocates for normalizing conversations about death and grief, she said.

Educating people about death and grief in the workplace and in school settings will also be a necessity, Weaver said.

It can be helpful to do something for grieving people by taking them to lunch or bringing them dinner instead of asking them “What can I do for you?” Weaver said.

One of the best things to do is to just listen to a person in grief whether they are talking or not, she said. But distractions may also help, like going to a movie or getting ice cream because being there for them is also important.

There are resources online like what to say and what not to say to a grieving person.

It was estimated that about 22-30 percent of college students are in their first year of bereavement, according to a 2008 research article.

Bolkan said it is important to remember Human Development 360 is not a therapy class, but talking and learning about death can be therapeutic.

“I think it can be cathartic for people because it’s [a] safe space to really talk deeply about this, but it definitely is an opportunity to look up these topics from a scholarly perspective,” she said.

In recent semesters, the class has taken Zoom tours of funeral homes, a crematorium and a cemetery. They have also had a coroner come in as a guest speaker.

There are no prerequisites to take the course, and the class is open to all majors and years. Bolkan and Weaver can be contacted for more information about the class.

“[Death] does have this, I think, really great paradox of teaching us how to live,” Bolkan said.