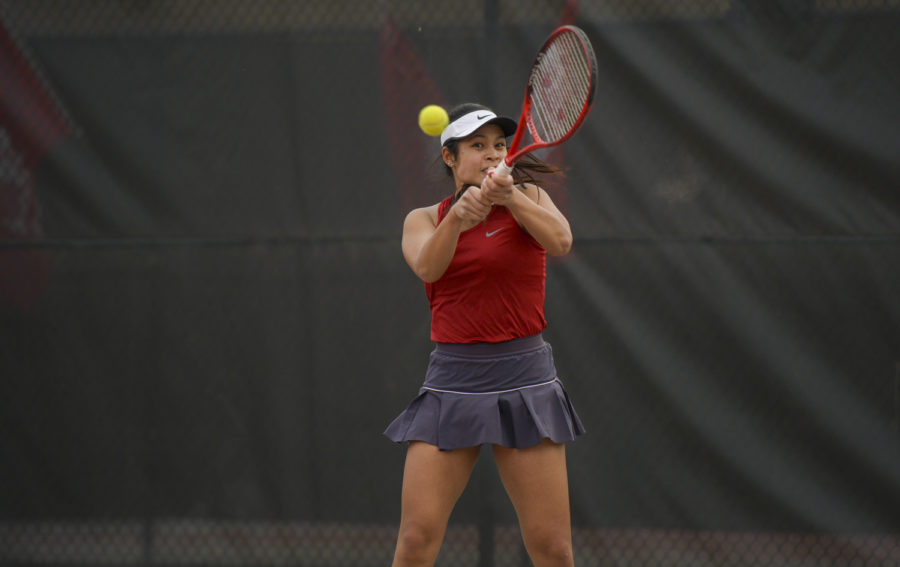 Sophomore Pang Jittakoat makes a backhand return during a singles match against Arizona March 14 at the WSU Outdoor Tennis Courts.

The No. 47 WSU tennis team lost both their matches against No. 35 Stanford and No. 25 Cal this weekend.

The Cougars found a win in their fifth game, as junior Savanna Ly-Nguyen continued her red-hot start to the season. Her victory came against Janice Shin, 7-6, 6-4. That win improved her to 13-2 in singles play for the season.

The match ended with Higuchi defeating Melisa Ates 7-6, 6-2 to complete Stanford’s 6-1 victory over the Cougars.

In their second match of the weekend, the Cougars faced the Golden Bears in Berkeley on March 27.  Double’s play started off with California’s Haley Giavara and Valentina Ivanov defeating Bayerlova and Sato 6-3.

Singles play began with Ivanov defeating Kumhom 6-1, 6-4. In the second singles game, the Cougars came out victorious when Ates defeated Cami Brown 6-1, 7-5. This marked Ate’s 100th singles victory in her career and helped secure herself as fourth on WSU’s all-time singles wins list.

California found another win in the third singles game, as Ly-Nguyen was defeated by Bright 6-2, 6-3. Then Moeller defeated Jittakoat 6-2, 6-4.

In the fifth singles game, Sato defeated Rosenqvist 7-6, 6-4 to gain the second point of the match and third of the weekend.  In the final singles game, Bayerlova defeated Giavara 4-6, 7-5, 1-0, but Cal had already secured the match by gaining their fourth point. Cal won the match 4-3 and moved the Cougars to 10-8 overall on the season.

The WSU tennis team will face BYU at 10 a.m. Thursday in Provo, Utah. The game can be watched on BYU’s website and stats are on the StatBroadcast page.