The game of deception and slight trust issues

It is as dangerous to challenge as it is to lie in Coup; many deceptions go undiscovered 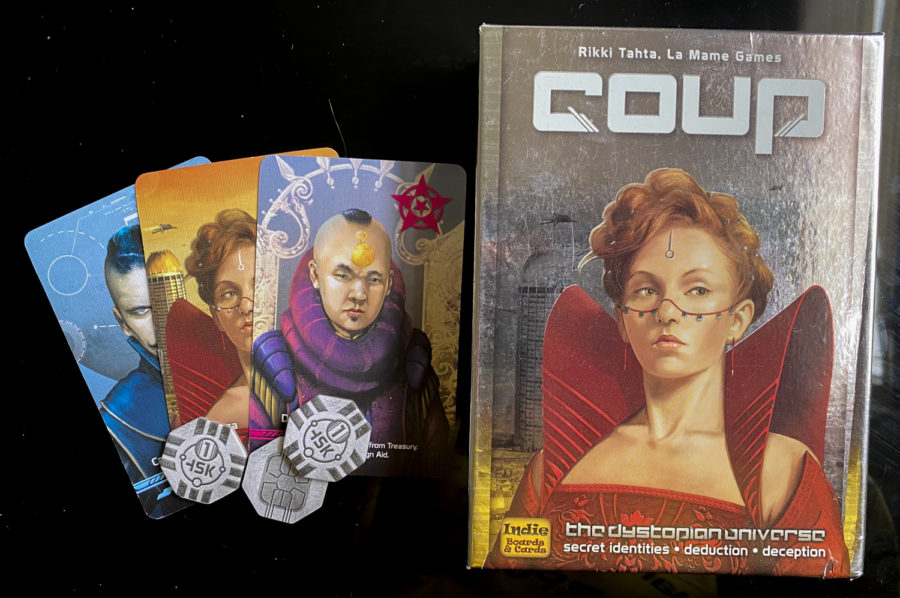 Lying is one of the main undertones of this game, but don't get caught.

Coup is the name and deception is the game. Everyone is out to get you. Trust no one. Every negotiation can be broken at a moment’s notice. Only the most cunning will win.

To set up Coup: each player chooses two character cards, which are fanned out to them. Characters represent the influence the players have in the court. These cards should not be shared with the group.

Then each player receives two coins from a pile in the center. Money should not be hidden but cannot be given away or borrowed. Cards are available with reference to abilities for each character.

The youngest player begins the game. Once one round is played, play begins with the last winner. Players can choose to either take one or two coins from the center, stage a coup to kill a character, or use an ability from their character. The Captain can steal coins from other players. The Assassin can kill another character for three coins, which can be blocked by the Contessa character.

The caveat to using your influence is that other players have the ability to challenge you. Some may believe that you are lying and ask you to prove that you are who you say you are. Any player can challenge the participant in action but cannot challenge once play has moved on.

It can be even more dangerous to lose a challenge in an assassination attempt. If a player loses when being assassinated, one character loses influence by dying and the other for the challenge, resulting in an instant loss of the game. Characters will also die instantly when they falsely claim to have the Contessa to block the assassination and are challenged on it.

This game is one of the reasons I have trust issues. It is not uncommon that I will be playing with my brother and he will claim to be at least four different characters in the span of three turns. It is as dangerous to challenge as it is to lie. As a result, many deceptions go undiscovered.

As my siblings and cousins are all in their late teens or early twenties, this is a good game that can keep us all entertained for a few hours on family vacations to secluded cabins or while camping during the summer.

If you have played this game or decide to in the future, comment on your experiences below.