How obsessed does one have to be to change their name, design their house after Tapatio? 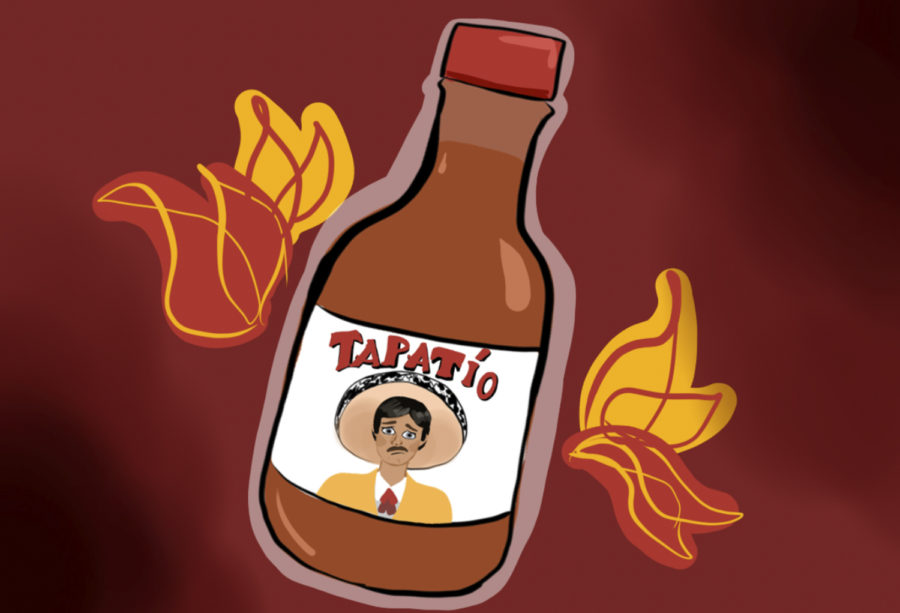 Who wouldn't love the handsome mariachi man on the Tapatio bottle?

While some “strange addictions” consist of chalk, sand or even the cotton candy from your attic, Tamira Tapatia’s strange addiction is edible but relatively painful for the tastebuds. Tapatia is eerily obsessed with Tapatio — she even changed her name in honor of the sauce.

“After the first time she tried the sauce, she reached for the bottle from her high chair and started hugging it, and calling the man on the bottle ‘mi tesoro,’ which means ‘my treasure,’” Trina Trenta, Tamira’s mother, said.

As she grew older, Tapatia would bring her bottle of hot sauce everywhere she went because she was simply sure there would be a time she might get hungry and need to eat something. She will not eat anything without dousing it with Tapatio. She draws the line at beverages, though. She’s not a lunatic.

“I will never get tired of Tapatio. The red peppers, the garlic, vinegar and other spices. And most importantly, the handsome mariachi I’ve come to fall in love with. I write about my love for Tapatio on my blog, ‘Love, Tapatio, Pray’ where I also share delicious recipes,” Tapatia said. “Have you ever baked with Tapatio? I use it as a replacement for oil in every recipe. It adds that color every food needs!”

Editor’s Note: Mabelle Sugar, our reporter, had not tried any Tapatio baking recipes because her spice tolerance is at catsup. She gets spiced by watered-down ketchup. So, naturally, we had her interview a subject obsessed with hot sauce because fear drives success sometimes.

The interior includes photos of her and a bottle of Tapatio at many world-famous landmarks and one portrait of her and the Tapatio man as a married couple. One red loveseat and a bright yellow coffee table centered in the living room are all that were documented during the interview.

“I have always wanted to find out who that man is, but by now I’m sure he’d be as old as my grandpa. It really makes me wish I was 75 right now, just so it’d be acceptable for me to marry him,” Tapatia said. “He’s the reason I got into the Harvard School of Business, and the reason I can buy 100 bottles of the sauce a week.”

Tapatia had used the power of Tapatio to ace every single test she had ever taken since kindergarten. She said Tapatio was the source of her immense brainpower, although her teachers were always initially skeptical about her need for Tapatio to take tests.

“My teachers didn’t get it. When I told them why I had to bring a shot glass for my classroom Tapatio, they thought I was joking so they sent me to the principal’s office,” Tapatia said. “I told the principal it calmed my nerves and helped me concentrate during tests, so Mrs. Bayleif made me get a doctor’s note to prove it.”

After getting that doctor’s note, Tapatia would go on to get 100 percent and extra credit on every single test she took. She became the first fifth-grade valedictorian for her elementary school and was able to eventually skip eighth grade.

Her success did not stop there because not only did she continue to make the highest grades in her school of 3,200 students, she also began a club called ‘Flavor Club’ where students could come learn the culinary history of their favorite foods and spices.

In her junior year, Tapatia scored 1600 on her SAT and  36 on her ACT, taking half of the allotted time to ace these college entrance exams. At 16, she was offered a full-ride, early admission to Harvard so she could study marketing.

The Tapatio company heard about their number one fan and had a job reserved for her upon graduation. Two degrees later, the country’s best marketing professional arrived into the workforce.

Although she wears a power suit with the Tapatio logo on the back of the blazer, every person takes this lady seriously. She could sell a piece of bark covered in Tapatio for a hundred bucks — she is that good.

“I am so glad I’ve been successful enough to never be afraid of running out of my favorite hot sauce ever. I spent $12,562.89 on Tapatio in 2020, because I thought I had to stock up for quarantine,” Tapatia said. “While other people bought all the toilet paper, I bought all the Tapatio. I have a bidet, so I don’t really need toilet paper anyway.”

Before the end of the interview, Tapatia insisted on leaving a snack recommendation. One of her top three favorites is “Tostilocos,” which takes basic chips, hot sauce and lime to a whole new level.

Starting with a bag of the salsa verde flavored Tostitos, cut the bag open from the side and top it with cucumber, jicama, lime juice, chamoy, Japanese peanuts, pickled pork skin, Tajin and of course the Tapatio, Tapatia said.

“It’s just … chef’s kiss. Delicious. Gordon Ramsay is quaking in his shoes,” Tapatia said. “Be warned, there is a burning sensation but it’s a nice one.”

This snack can also be achieved with Doritos, in place of Tostitos, for the ultimate “Dorilocos.”

Tapatia said she has developed the strongest stomach. She is immune to heartburn and her spice tolerance is past ghost pepper because she is “not weak.”

With that, she leaves with a “Keep Calm and pass the Tapatio.”