Cougar family has attended WSU since 1927 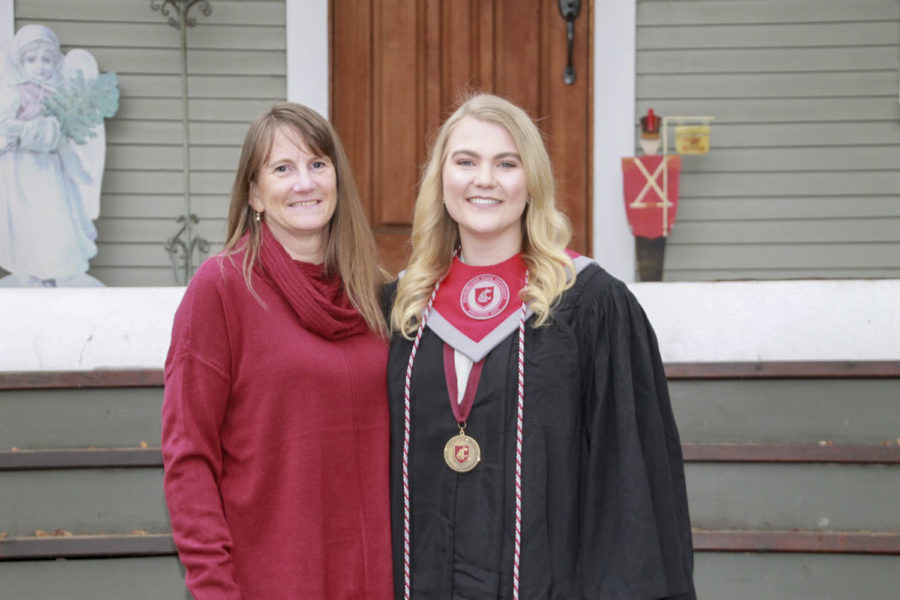 Athletics has been a part of Mallory's life and football games were common. One game included her brother swearing vengeance against the Ducks.

WSU graduate Kyla Mallory, is a fourth generation WSU student. Her great grandparents met in 1927 at the university when it was still Washington State College. This continued with her grandpa and his family coming to WSU, then her mom and her cousins.

Mallory said she is the fourth generation of students in her family attending WSU, along with a lot of her second cousins.

“I remember walking to my computer science lab my freshman year and I saw the [teacher’s assistant’s] last name up on the board and I was like ‘Oh that’s funny, I’m related to someone with that name,’” she said.

She said it is super cool to be going to school with a bunch of her family members, and she still has second cousins currently attending WSU.

There are multiple descendants of her great-grandpa, Ralph Riley, who have attended WSU, she said.

Cougar Athletics has been a huge part of her life, she said. Growing up, she would attend multiple football games per year.

Mallory said she enjoyed being able to bring friends to football games, and she even brought a friend to the homecoming game when she was in eighth grade.

She said she remembers one specific game against the Oregon Ducks, and her family had endzone tickets.

“There was this Ducks fan that had a cougar Butch stuffed animal and so for every point they scored he would whack the stuffed animal against the railing,” she said. “I think from that moment on, my brother swore a vengeance against the University of Oregon, which is very fitting for a WSU fan.”

Mallory said her great-uncle, Rex Davis, was the tennis and men’s gymnastic coach, but mainly he focused on tennis. She said Davis coached tennis for years, and the tennis courts are dedicated to him. There is even a plaque with his name on it.

Not only has her great uncle been a part of Cougar athletics, but her great grandpa was an athlete as well, she said.

“Ralph Riley played football at Washington State College, as well,” she said. “Multiple family members have been involved in Coug Athletics and remain very passionate about athletics to this day.”

During her sophomore year, Mallory lived in the same apartments her mom lived in.

She and her mom bonded over living in the same apartment, Mallory said.

She was one of the first tenants after the complex got renovated. She said her mom visited once and mentioned it was familiar but different at the same time.

“Even though it looks physically a lot different than it did when she was a student, just still being able to connect over living there and walking the same path that she did to school [is cool]. It was kind of fun,” she said.

Mallory said she enjoyed her time at WSU. She was in the Honors College and lived in the Honors residence hall her freshman year, and said she met the best people right off the bat.

She said she graduated with a degree in data analytics and was in the first group of students to graduate with that major at WSU.

“Being a part of this new program at the university was really exciting to just blaze a trail for students that will come after us, who are interested in the field of data analytics,” she said.

Even though she did not want to come to WSU, she feels like she made the right decision.

“I not only feel this strong connection to the greater Coug family, [but] I think WSU by far has the most school spirit out of any university that I’ve had personal connection to,” she said.

Mallory said she enjoyed graduating from the same school as a lot of her family members. She likes the Pullman area as well.

She said she grew up south of Seattle, and she looked forward to her trips to visit family in Pullman because it gave her a break from city life.

“I have nothing but great memories with my classmates, with my friends and with my family,” she said.