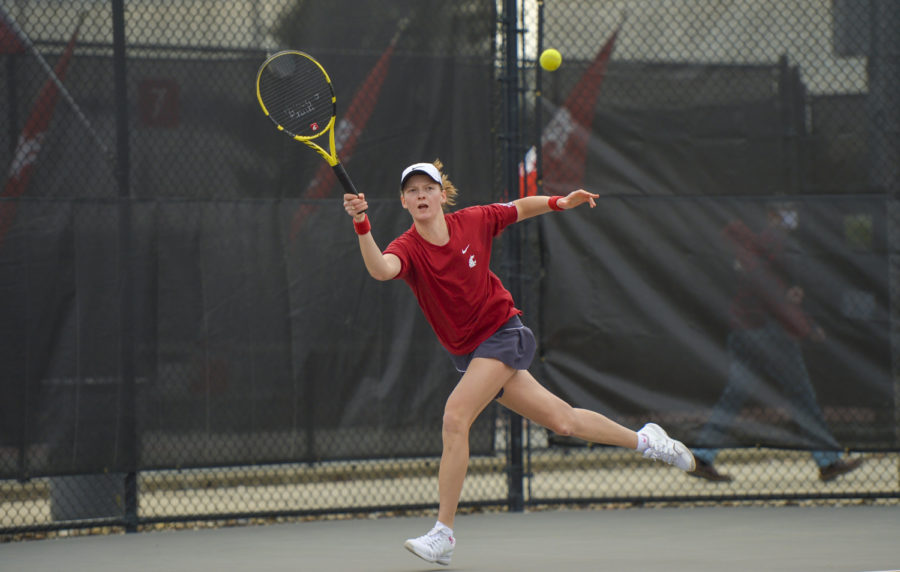 The WSU tennis team is set to play a four-match road trip this coming weekend against BYU on Thursday, Utah on Friday, Colorado on Sunday and Denver on Monday.

WSU is coming off losses against the two northern California Pac-12 teams this past weekend. The Cougars lost 6-1 on the road against Stanford last Friday before traveling up to Berkeley to lose a close 4-3 on Saturday. WSU holds a record of 10-8 on the season and are 2-4 in Pac-12 play.

Although the Cougars lost some hard-fought battles last week, head coach Lisa Hart thinks there is reason to be optimistic for these upcoming matches and looks forward to the four-match road trip.

“We want to win all the matches,” Hart said. “I would say that’s kind of our goal to win them all.”

Historically, WSU has a 12-5 record against the BYU Cougars since 2002. The Cougars currently have a 12-6 record this season and are coming off a 5-2 win over the University of Pacific last Saturday.

This will not be the first matchup between WSU and the Utes this season, as the Cougars defeated them 4-1 on March 11 in the Hollingbery Fieldhouse.

“We already played them this year and beat them, so I think that we have a little bit of an advantage with that,” Hart said.

WSU has a record of 7-5 against Colorado (7-8, 1-4) since the 2005 season. The Buffs started their season out hot by improving to 7-2, but their recent struggles have caused them to drop their last six contests.

Hart said that their Pac-12 matches against Utah and Colorado are important on getting them back in contention in the conference.

“We have four Pac-12 matches left and that will really help us if we could get those four wins,” Hart said.

WSU doesn’t play against Denver (7-3) very frequently, but they have a 2-1 record against the Pioneers since 2008. Denver’s last match was a 6-1 win over Kansas City on Sunday.

“We for sure need to be ready to play because we will be playing at altitude which kind of changes things,” Hart said. “And obviously being on the road is a little harder than home.”