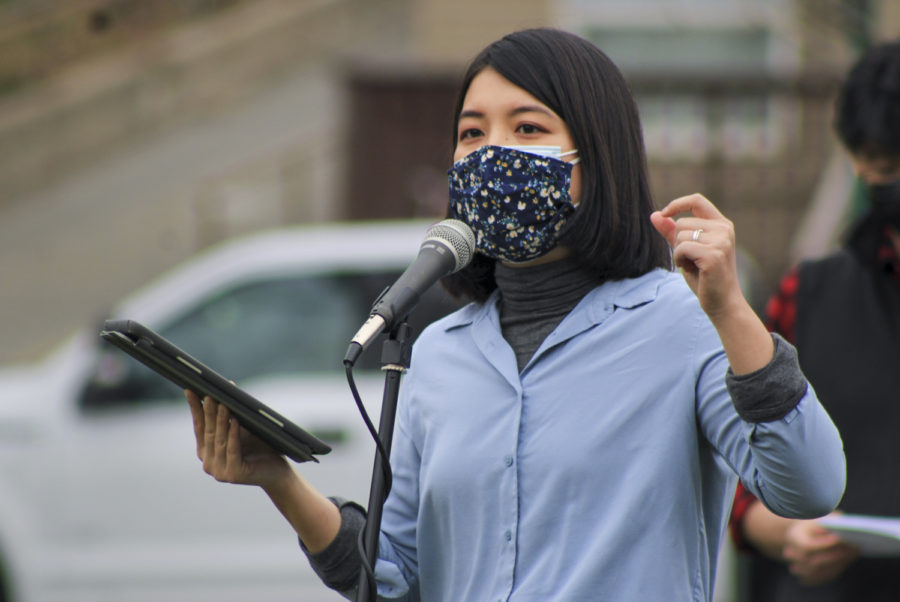 "No matter how hard I studied as a student, how hard I worked as a designer ... how cute my kid is, it doesn't matter. This face could get me killed,” said Jiemei Lin, event organizer and senior graphic designer for WSU’s College of Education.

Around 300 people gathered Saturday afternoon at Reaney Park to support Asian Americans and Pacific Islanders and to protest racism against the AAPI community.

Participants held signs with phrases such as “Stop Asian Hate” and “Hate is a Virus” during the program and while marching through downtown Pullman.

Organizers planned the rally in response to the over 3,800 hate crimes against AAPI people in the last year, which include the Atlanta spa shootings on March 16, where six of eight people killed were AAPI women.

Jiemei Lin, event organizer and senior graphic designer for WSU’s College of Education, led a moment of silence for the eight victims.

Lin said the shootings made her realize someone could want to kill her because she is Asian American.

“No matter how hard I studied as a student, how hard I worked as a designer … how cute my kid is, it doesn’t matter,” Lin said. “This face could get me killed.”

These hate crimes are part of centuries of racist acts toward the Asian community, said WSU Athletic Director Pat Chun. Chun is the son of two Korean immigrants.

Yong Rhee, event organizer and associate professor in WSU’s College of Education, said the purpose of the rally was to ask for help from the community to acknowledge and educate about anti-Asian hate. Speakers shared personal experiences with racism, their hopes for the future of America, poems and songs.

“I am not an activist. I am not a spiritual leader. I am not an Asian community leader,” Rhee said. “I am a father to two Asian American daughters … and I am afraid.”

Rhee said he and others living in Pullman are afraid because they have lived through experiences with hate and racism.

Despite this, Rhee said he did not feel afraid standing in front of the crowd at the rally.

Lin said she and Rhee talked to Asian business owners in Pullman about participating in the rally, but many refused because they were afraid of retaliation.

AAPI children are often bullied at school, Lin said. It is important for children to learn Asian history beyond Chinese New Year.

There are five years all people should remember when it comes to Asian American history, said Raymond Sun, WSU associate professor of history.

The Chinese Exclusion Act of 1882 barred all Chinese people from entering the United States. The Immigration Act of 1924 more broadly prevented immigrant groups from coming to the U.S. President Franklin Delano Roosevelt passed Executive Order 9066 in 1942, authorizing the forced removal of Japanese Americans from their homes to internment camps, Sun said.

In 2020, President Trump called COVID-19 the “Chinese virus” or “Kung flu,” which incited violence against Asian Americans, he said.

“Never in my life before have I ever seen Asian Americans gather like this, organize like this,” he said. “The fact that this can happen … is a sign that the culture has reached a tipping point.”

The group Stop AAPI Hate on the Palouse is raising money for Asian American history education in Pullman schools. People can donate online.

Lin said she feels Asian Americans receive very little attention in mainstream media. Seeing more than 300 people gather in support of the AAPI community was meaningful to her because it showed people do care about Asian Americans.

Many of the rally participants were international students, Lin said. It can be confusing for them when people talk about Asian Americans because they are not U.S. citizens.

However, Lin said every Asian living in the U.S. is an Asian American.

Crowd members wore masks and maintained social distance during the rally. Rhee read a statement from Pullman Police Chief Gary Jenkins, who said he supported the cause but could not attend because of Whitman County Health Department’s emergency order, which limits outdoor social gatherings to less than 10 people.