Competitive version of Scrabble; first person to use up all their letters to create words wins, but make sure they're not made up 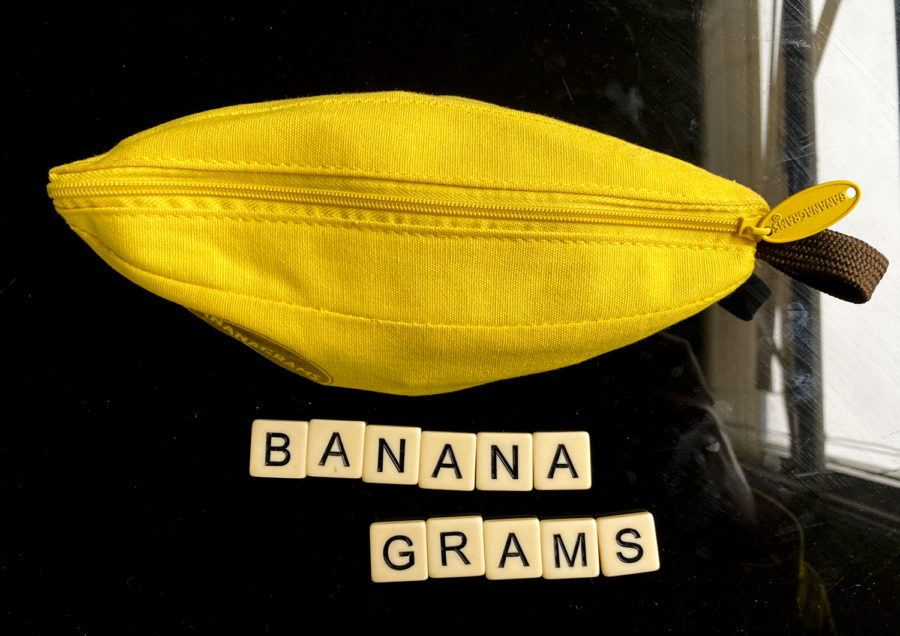 Think you know more words than your friends? Bananagrams is the game for you.

Split! Hands rearrange tiles into words, shaping and reshaping as ideas are tried and discarded.  The side glances at your opponent and panic when they have more words than you. Are you ready to play Bananagrams?

To set up the game, every player takes a certain number of tiles depending on the number of participants. Each player will take 21 tiles if there are two to four participants, 15 tiles for five to six players, and 11 tiles for seven to eight players. Tiles remain face down until the game begins.

To start play, one player must yell “Split!” which results in players turning their tiles and creating a personal grid of words like one found in a crossword. When a player is able to use every tile they have in the grid, they yell “Peel!” and take another tile from the center.

Players can yell “Dump!” to put one letter back in the center, although that player then has to take three new tiles from the center.

To win, there must be fewer tiles in the center than people playing the game. The first person to have every letter used in their grid yells “Bananas!” to announce their victory. Other players then look at that person’s grid to look for mistakes in spelling, proper nouns or any made-up words. Players are not allowed to use abbreviations.

My family is all about Scrabble. We bring Scrabble on camping trips and it’s the ultimate determiner of who has the best vocabulary in the family (this is inevitably always my mother).  This game offers a fun new challenge to add an element of speed.

This game is recommended for ages seven and up. There are different versions such as Bananagrams Norwegian, French, Hebrew and Spanish, which could be great for language learners. Who has the fastest vocab in the west?

Bananagrams can be purchased on Amazon for as low as $14.

If you have played this game or play it after reading this article, comment on your experiences down below.