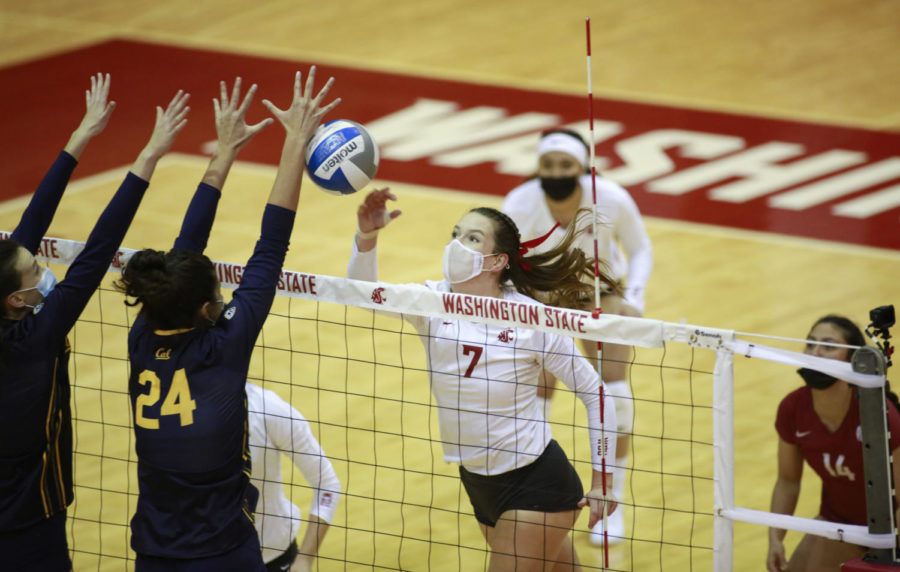 Sophomore outside hitter Pia Timmer rises up over net to spike ball.

The WSU volleyball team split their series with the Arizona Wildcats this past weekend, winning 3-1 on April 1 and losing 3-0 April 3.

The end of this series against the Wildcats also marks the end of the regular season for the Cougars. The team ended up finishing 11-4 and fourth in the Pac-12 standings.

The Cougars found out on Sunday that they will play as the 15th seed in the NCAA women’s volleyball championship. WSU’s first game will be on April 15 against an opponent yet to be decided.

Senior outside hitter Penny Tusa led the Cougars in their win with two aces and 15 digs. Freshman outside hitter Julianna Dalton led the team with 14 kills. Freshman setter Argentina Ung also had 12 kills of her own on the day.

The Cougs out-blocked the Wildcats 14-5 during the first match and had 72 points with a hitting average of 0.219.

In the first match, Ung had a career high in both kills and hitting percentage of .571. Ung also had three digs and one block to lead WSU to their 3-1 win.

In the first set, the Cougars and Wildcats went back and forth with small leads or ties until the Wildcats took a lead, which also led to a momentum swing in favor of the Wildcats. They took the first set 25-21.

In the second set, WSU came out strong, going on a 3-0 run to start. The Cougars also had a small running score of 6-3, but the Wildcats came bouncing back. An ace from Tusa and a kill from Dalton pushed the Cougs’ lead to 14-11.

The Wildcats came back once again and tied the match 18-18, but WSU then went on a 6-1 scoring run and led 22-19. After they fought to win the set with an ace from redshirt sophomore Aria McComber and Pukis and two attack errors by the Wildcats, the Cougs took the second set with a 25-23 win.

WSU came out swinging in the third set and started with a 4-0 scoring run. The Wildcats came back to close the lead to 16-15 and tied it 20-20 late in the set. The Cougs went on a 5-1 scoring run to win the set and have a 2-1 advantage going into the fourth.

Three Cougars recorded early kills which put them up on top 7-5. The Wildcats took an early timeout in order to try and switch the momentum but it was unsuccessful. After the timeout, the Cougs went on a 7-1 run to take a 17-8 lead. After several impressive defensive and offensive plays, WSU won the fourth set 25-12 to seal the match win.

In the first set of the second match, Arizona and WSU went back and forth until the Wildcats pulled ahead and won 25-21.

Going into the second set, the Wildcats had a hot start and went on a 7-2 scoring run. The Cougars answered with a 4-0 scoring run to close the gap to 9-8, but Arizona retook the lead 15-13. After multiple back-and-forth momentum swings, the Wildcats hit 25 first and had a 2-0 advantage over the Cougars.

Arizona jumped ahead 7-4 to start the third set of the match. Freshman middle blocker Jasmine Martin had a block followed by an ace by sophomore outside hitter Pia Timmer, which contributed to a 4-1 scoring run.

U of A was still up 16-12, but WSU answered with three consecutive points. It was not enough and the Wildcats went on a 6-3 scoring run to end the third match and won 25-20.

WSU had a chance to finish toward the top of the Pac-12 standings with a win on Saturday, but the cross-state rival Washington Huskies (17-3) have claimed the title.

WSU volleyball’s next scheduled match is against either Western Kentucky or Jackson State. The opponent will be determined based on the match between the two on April 14. Their match against the winner will be at 7:30 p.m. on April 15.