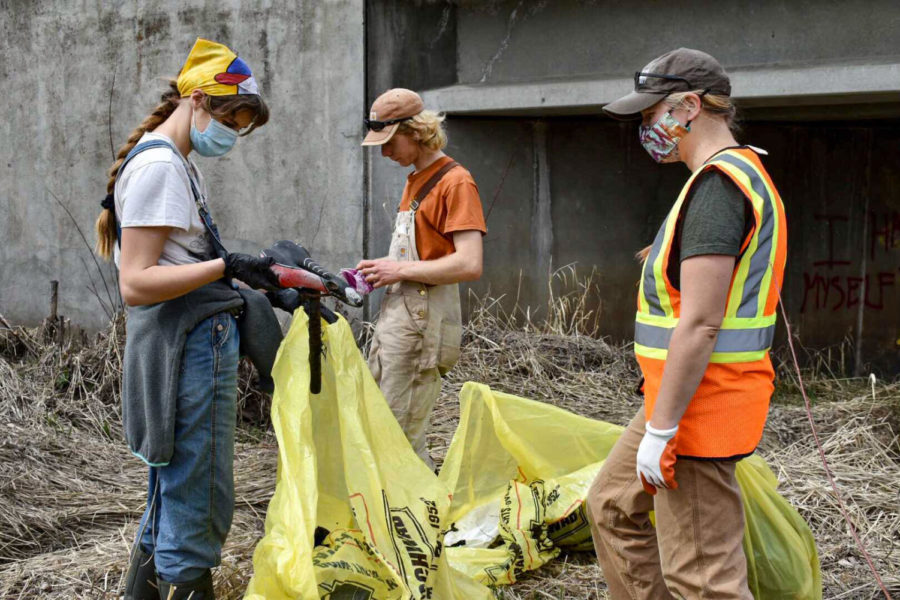 Volunteers engaged in a stream clean-up effort on Saturday in Pullman as part of the Palouse Conservation District’s Know Your Flow campaign.

The campaign is a month-long event to promote water conservation, said Jodi Prout, PCD education and outreach coordinator. It aims to raise awareness about water resources in the community.

Saturday’s stream clean-up is one of four clean-ups scheduled for this month, she said.

“This stream clean-up is an opportunity for folks to get on the river and see a part of Pullman that they probably wouldn’t be able to see,” Prout said.

Events like the stream clean-up give individuals an opportunity to have a sense of ownership and engage in “voluntary stewardship” of the environment around them, she said. It also allows the community to witness firsthand how their water conservation efforts impact the environment, including wildlife.

“I think it’s a really personal investment in your community itself, like the fact that you can make this your river, your stream,” she said. “This is right in your backyard.”

PCD canceled its stream clean-up last year because of the COVID-19 pandemic. Prout said PCD has gradually resumed in-person events in the past few weeks.

The event was limited to 10 volunteers due to the county’s recent public health order, which prohibits gatherings of more than 10 people. In previous years, about 250 people would volunteer for the stream clean-up, she said.

Savannah Reed, event volunteer and University of Idaho junior horticulture major, said she enjoyed the stream clean-up because it allowed her to do something good for the community.

Reed said it felt weird and different to wear a mask and socially distance herself from everybody, but she still had fun volunteering during the event.

Pullman resident Rich Koenig volunteered with his son, Nicholas, and Cash McCann. He and his son signed up for the clean-up last year but were not able to volunteer because of the event’s cancelation.

Nicholas Koenig and McCann, both 13 years old, participated in the clean-up as part of their Boy Scout service projects. Nicholas said they found motor oil and an old Powerade bottle that looked as though it had been there for years.

“We walk this [riparian] corridor all the time,” Rich Koenig said, “so this is important to us.”

Prout said it is important to engage in clean-up efforts along riparian corridors because they hold recharge areas, which is where surface water saturates into the ground and into the aquifers.

Pullman gets its water from the Grande Ronde Aquifer, she said. Because it is a confined aquifer, it does not have a quick recharge rate.

“From what research has shown, it takes a really long time for that aquifer to recharge and it’s dropping at an unsustainable rate,” she said.

PCD will hold its Conservation Talk Series 6-7 p.m. on April 7. The event is titled “Everyday Water Conservation: Ways to Help Save Water on the Palouse.” Individuals can register for the event on PCD’s website.