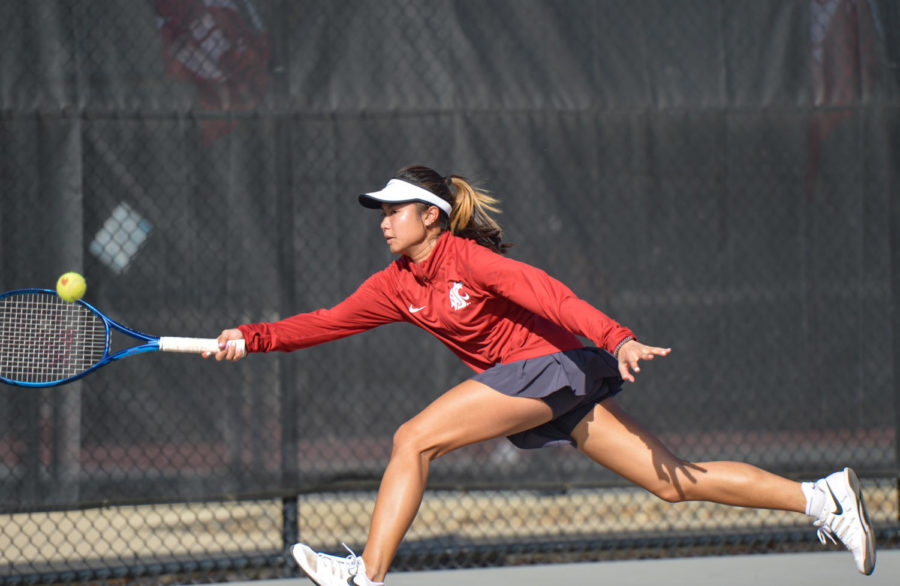 The WSU tennis team went 1-3 in their four games on the road this weekend against BYU, Utah, Colorado and Denver.

After the long road trip, the Cougars fell to 11-11 on the season and 3-5 in conference play. The team’s shot at a Pac-12 regular-season title has slimmed with just two in-conference games left on the season.

The Cougars fell to BYU 4-3 in their first match of the four on Friday. Doubles play was dominated by the Cougars of Utah, as they won all three matches.

In singles, WSU rallied for a comeback after going down 1-0 due to their losses in doubles play.  In the first singles game, Kumhom fell to Jiao 6-0, 6-3. After that, the Cougars started to gain their lost points back.

Jittakoat defeated Lin 6-2, 6-4 and another victory came in quick succession, as Savanna Ly-Nguyen defeated Astle 7-5, 6-2 to bring the match total to 2-2.

No. 86 Bayerlova took on Abramyan and lost the first set but came back to win the second set, forcing the game into a tiebreaker. Both athletes fought hard in the third set but Bayerlova couldn’t quite defeat Abramyan, losing the final set to lose 7-5, 6-7, 6-3.

On Saturday, the Cougars faced Pac-12 rival Utah in Salt Lake City, Utah to win their only competition 4-3. WSU started off strong with Bayerlova and Lee defeating Anya Lamoreaux and Madeline Lamoreaux 6-3 in the first match.  Utah won the next two doubles games and to secure the doubles point and go up 1-0.

Once again, the match was tied for the final match and Ly-Nguyen faced Anastasia Goncharova. Goncharova edged out Ly-Nguyen for a close win in the first set 7-6, but rallied to win the second set by an equally close margin. Finally, Ly-Nguyen was able to secure the win for the Cougars when she won her final set 6-4.

WSU won the first doubles match with Bayerlova and Lee defeating Megan Forster and Antonia Balzert 6-3, but Colorado won the next two doubles matches to secure the doubles points.

“We’ve been in a little slump for doubles points for a few matches, so I expect that we’re going to kind of bounce back and start winning the doubles point soon,” Hart said.

WSU ended up dropping three more singles matches to give them the four points necessary for the team match win. Colorado secured the 4-3 victory when Sara Nayar defeated Bayerlova 6-7, 6-1, 6-3.

Despite the loss, the game marked Ates rising to No. 3 on WSU’s all-time win list with 103 career wins. Ates rose up to fourth just last week when she had her 100th career win.

“I think she’s going to probably break the record,” Hart said. “I’m counting on it.”

The Cougars played their final game of the weekend against Denver on Monday.  The final match of the road trip ended up being the worst for the Cougars, as they fell 4-0.

Denver took the doubles points by winning two of the three matches. The Pioneers won the first three games in singles to seal the overall victory.

The next game for WSU tennis is a home game against Oregon at 11 a.m. Sunday at the Outdoor Tennis Courts.