Search for the greatest: In the Aeroplane Over the Sea 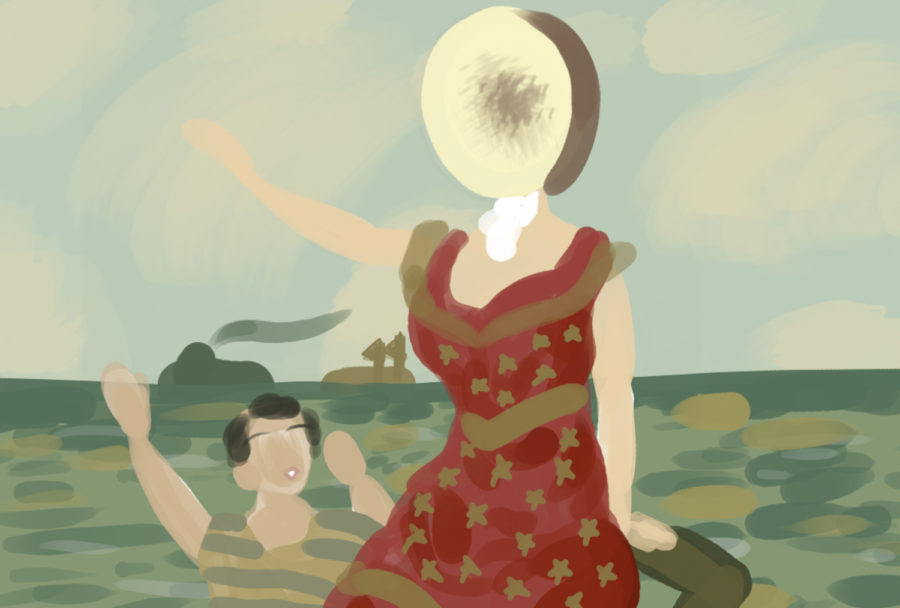 After reading The Diary of Anne Frank, Jeff Mangum wrote one of the most interesting albums, according to columnist.

After producing his first album with his music group, musician Jeff Mangum walked into a bookstore. He purchased a copy of “The Diary of a Young Girl” and began reading it. The story of Anne Frank and her family hiding until their eventual capture by Nazis altered Mangum for years to come.

Mangum spent about three days crying over Frank’s story and even had dreams about going back in time and saving her from her ultimate demise. His connection with the book would ultimately lead him to create one of the most perplexing, yet intriguing albums ever.

Neutral Milk Hotel was an American band formed in Ruston, Louisiana, in the 1980s. The band was typically categorized as creating indie-folk and psychedelic folk music, as their sound was truly unique compared to other bands.

The band was led by Mangum, who was the mastermind behind the band’s work. Other band members include Scott Spillane, Jeremy Barnes and Julian Koster. In 1998, the band released their second and final album, “In the Aeroplane Over the Sea.”

Most of the album’s tracks have a lo-fi production sound, constructed by producer Robert Schneider. Schneider captured the sound of Mangum’s acoustic guitar with the use of Newman microphones. This technique resulted in Mangum’s guitar sounding more percussive compared to it being plugged into an amp.

Another big part of the production is the excessive distortion on some tracks. Schneider created this sound by compressing recordings and maxing the volume out on cassette tapes. Schneider did this not only for Mangum’s guitar but practically every other instrument, creating a fuzzy atmosphere audible in tracks like “Holland, 1945” and “King of Carrot Flowers Pts. 2 & 3.”

The main reason this album doesn’t fit into any specific subgenre is because of the band’s strange instrumentation. Besides ordinary instruments like guitar, trumpet and drums, there are many other unusual choices of instruments on some tracks.

A great example of this is Koster’s use of a singing saw, which creates a sound that imitates a lulled whistle. Other instruments include a digital horn, which is similar to an otamatone, and old bagpipes. The instrumentation on the album helps build a mysterious atmosphere and creates a unique sound, which can be heard in the title track and “[untitled].”

The album is known for its massive cult following on the internet, mainly because of the mysteries surrounding the album and its creation of the indie scene that flourishes today. After the production finished, the band suddenly broke up with no explanation, only reuniting briefly in the 2010s to perform.

Some assume that the band broke up because Mangum felt like he had nothing more to say when it came to music. This is hinted at by the sound of Mangum placing his guitar down at the very end of the album.

Also, the lyrical content is incredibly bizarre. While most of the lyrics relate to childhood, nostalgia and Magnum’s thoughts about Frank, there is no accurate way to describe the album’s theme. An example of Mangum’s strange songwriting is visible in tracks like “King of Carrot Flowers Pt. 1.”

“When you were young

You were the king of carrot flowers

And how you built a tower tumbling through the trees

In holy rattlesnakes that fell all around your feet”

Another example is in “Ghost.”

“And one day in New York City baby

A girl fell from the sky

From the top of a burning apartment building

And when her spirit left her body

How it split the sun!”

The only tracks that are comprehensible in meaning are Mangum’s lyrics regarding Frank. His references are seen throughout the entirety of “Holland, 1945” and in “Oh Comely.”

“I know they buried her body with others

Her sister and mother and 500 families

And will she remember me 50 years later

The combination of mystical songwriting, unique instrumentation and lore help cement the album as a legend among some of music’s greatest albums. The acoustic tracks sound nostalgic, especially when juxtaposed with Mangum’s vocals.

The loud, distorted parts of the album create a fun atmosphere and help make noisier tracks sound more vibrant and catchier. The album is a true staple of human creativity’s limits, and it cements Mangum as a martyr among music’s most exceptional figures.