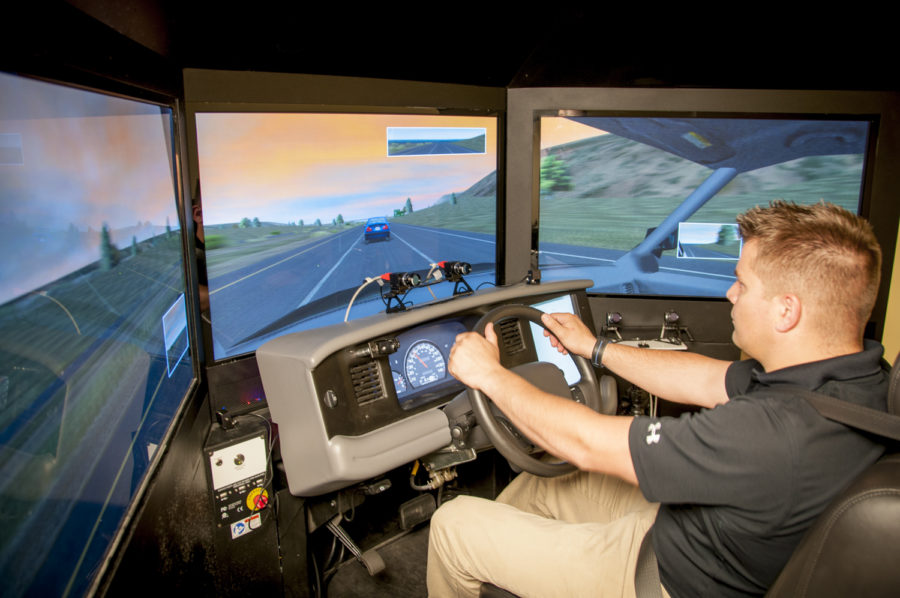 The Counter Bias Training Simulator places officers in a plethora of scenarios where implicit bias can come into play. Officers have to react promptly to deescalate the situation safely.

WSU PD Chief Bill Gardner said it was disheartening when he read in a 2019 Evergreen article that Black residents are nearly five times as likely to be arrested by the department.

All the officers were taken back by the statistic. They began questioning their implicit biases and whether they contributed to this disparity in arrest data. Gardner said the department wants to understand the statistic and what drives this disparity.

“We’ve done a considerable amount of training for officers on implicit bias,” he said. “We’ll continue to do that.”

SLRA took on the racial disparity in arrests research shortly after being founded last spring. The student-led group acted as an impartial outside entity and forwarded a series of recommendations for WSU PD to take following the research project, he said.

While SLRA’s research only found Black residents to be around 2.75 times as likely to be arrested by WSU PD, the finding was still a significant cause for concern. Differences in rates can be attributed to the confines of the study, according to SLRA’s fall 2020 report.

SLRA’s report said the Evergreen’s findings underestimated the African American student population causing the arrest rate to be higher than actuality. While Black community members only made up 4.1 percent of WSU Pullman’s population between Jan. 5, 2016 and Sept. 15, 2019, they accounted for 11.2 percent of arrests during this period.

“We wanted the Student Legal Research Association to help us figure that out,” Gardner said.

SLRA suggested WSU PD improve its methods of collecting data. Drivers’ licenses do not identify a person’s race, so often this is left to officers and databases to determine. WSU PD will now put more focus on accurately collecting race data to increase transparency, Gardner said.

Many of the other suggestions made to the department are already underway, he said. Last December, WSU PD released a Civil Rights Strategic Plan aimed at tackling implicit bias and increasing communication between the community and department.

The COVID-19 pandemic made communication with the community and multicultural groups more complex and less frequent. However, WSU PD plans to increase the frequency of those meetings once students return in the fall, Gardner said.

SLRA also suggested WSU PD engage in a program created by WSU researchers Lois James and her husband. The Counter Bias Training Simulator places officers in a plethora of scenarios where implicit bias can come into play.

“Implicit bias is either unconscious or sometimes semiconscious,” she said. “It’s like the thumbprint of your upbringing and value systems.”

All the scenarios are filmed in numerous ways with different actors and outcomes. James said variables, such as race, gender and religion, can be altered to train officers to respond appropriately under any circumstances.

The simulator is capable of putting officers through shorter single branch scenarios, as well as longer multi-branch situations. Officers have to react promptly to deescalate the situation safely, working to avoid uses of lethal force, she said.

Around a dozen law enforcement agencies have utilized CBTsim. The simulator is available to purchase or rent for smaller departments with fewer officers, James said.

WSU PD was one of the first departments to test the simulator when it was developed in 2015. WSU PD will start using the simulator on campus again later this spring. Gardner said he would like to include newer officers and members of the WSU Police Advisory Board.