OPINION: Satire: Why the next Olympics should be held in Antarctica

The winter Olympics, but make it frostier. And bitier. 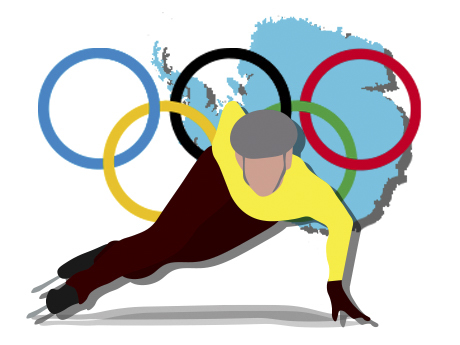 Have you ever wondered what it would be like to watch ridiculously talented athletes compete not only against each other but also against the elements? I don’t exactly mean a competition in Siberia or the Sahara Desert, but instead, somewhere the athletes can all bundle up and do their thing with penguins and walruses as their audiences. Who knows, maybe even Santa Claus, Mrs. Claus and the elves will show up to cheer on their favorite athletes. Nevertheless, I want you to open your mind and picture this:

American gymnast and interpretive contortionist Shanda Leer is preparing for her floor routine to “I’m a gummy bear (The Gummy Bear Song)” by Gummibär. Wearing her zebra-cheetah printed leotard and leggings, Leer practices her backward somersaults and her sassy dance moves.

Once she spots her competition, she sends them a glare that could have cars turning around on the highway to get away from an ominous fury. Yoyo Stalling appears across the way in her sparkling black and purple leotard, ready to leave some theoretical bruises on Leer’s massive ego. Completely unphased, Stalling does three split leaps and ends her routine with an eye roll and a yawn.

“I couldn’t care less what Shanda thinks of me, because unlike her, I came to win. She can eat the snow I’m about to cartwheel on her face,” Stalling said. “Also I am used to the snow, my coach had me fly over to Alaska to practice for this year’s Olympics. I am not afraid of any wench.”

However, Stalling did not know Leer had a surgery performed two years prior that would definitely give her a large advantage. She initially went to her surgeon with an interest in using stem cells to grow an extra four layers of skins onto her hands and feet. There was no way frostbite and hypothermia were going to make her lose this competition. She was determined to beat her arch-rival in this year’s Olympics.

“I looked it up on the handbook, and it’s totally fine. It actually took me three months to completely grow the cells into skin, so I had my coach’s son wheel me around everywhere, feed me, brush my hair into a tight bun and do my taxes,” Leer said.

Being the top gymnasts in their respective countries, the pair met when they were four-year-old gymnastic prodigies. Stalling had beaten Leer by eight-tenths of a point, qualifying for the tot’s international competition. Leer was never able to get over that.

Now, nearly 20 years later, Leer is ready to finally beat Stalling at her own game. And this time, she came prepared for anything that was going to be thrown in her way, even if those obstacles include snow, ice and below-zero temperature.

In an ice-built arena, the athletes gather to begin competing, in their own section of the very large ice building. Football players wear ice picks on their cleats and beanies underneath their helmets. Basketball players wear Lululemon leggings in their team colors, and ice skates instead of basketball shoes. But gymnasts unanimously choose to wear their normal athletic wear, with an option for gloves and very thin socks.

“All gymnasts from all countries were talking about testing their athleticism against the elements of an arctic setting, and we respected their decision,” said Olympic Overseer Beowoof Casanova. “If they want to wear gloves as the only protection against these temperatures, that’s their choice, honestly. I think my cheeks would freeze together, so I personally wouldn’t risk it.”

Leading up to the gymnastics section of the competition, the gymnasts stepped onto the floor. Hershee Kitkit from Canada was the first one to fall to frostbite. She didn’t die, instead she fainted because her arms froze when she made contact with the snow.

One by one, the gymnasts would be halfway through their routines, when they started freezing to the ground because the sweat of their hands and feet stuck to the ground, similar to when you lick a pole during the winter. Pain.

The last two competitors left were Stalling and Leer. They were the only gymnasts who completed their entire floor routine. They were going to have to battle for first place.

“It’s on, betch!” Stalling said. “You’re going to have to pry that gold medal from my cold, hypothermic hands!”

Leer remained silent, and instead watched the last bit of warmth leave Stalling’s already freezing skin. As Stalling slipped from the third flip dip of her routine, Leer already knew she had this one in the bag. But she wanted to perform her routine anyway, because she spent a few hundred grand on that surgery.

All in all, Leer stuck her entire routine, down to the “t.” She got exactly what she had wanted, and she wasn’t freezing. It was a great win for Team ‘Merica. Haw yee.