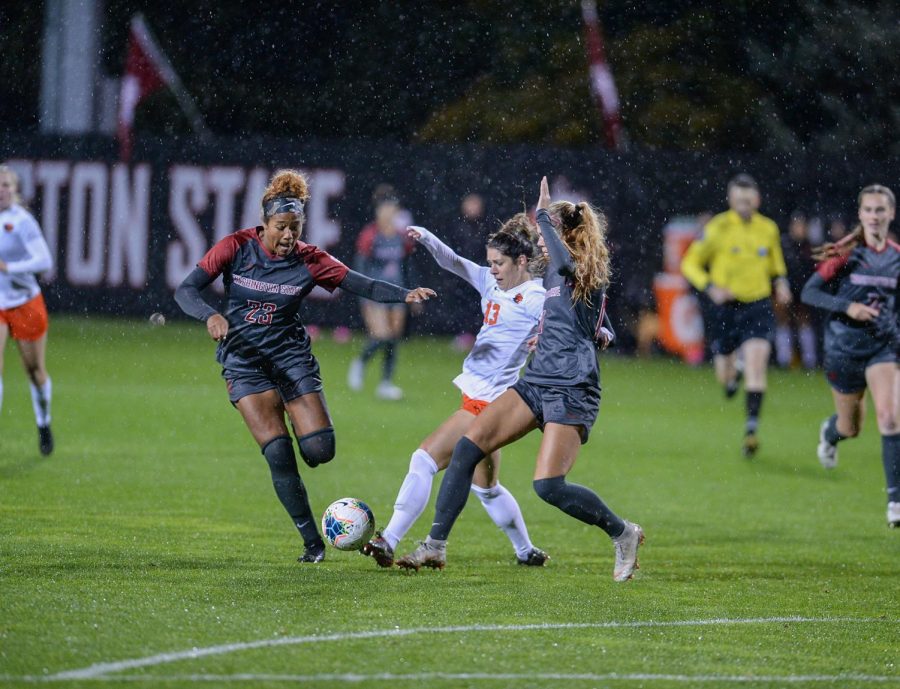 The Cougars are coming off of a four-match road trip and have not played in Pullman since Feb. 28 against Utah. Before the road trip, WSU missed four consecutive matches due to COVID-19 complications. The Cougars’ nine total games mark the lowest amount in the conference.

Their trip back home will also be the first time the team plays on the Lower Soccer Field since the 2019 NCAA Tournament. The Cougars have been playing in the Indoor Practice Facility for all their previous home games this season.

“Part of this is being home, but also finally being able to be outside,” head coach Todd Shulenberger said. “Fans or no fans, it’s just the reality of being in our own environment.”

WSU headed down south to play the two Pac-12 Los Angeles schools this past weekend. The Cougars did not score a single goal in southern California, as they lost 4-0 to UCLA last Friday and 1-0 to USC on Sunday.

The Beavers are riding on a two-match win streak after their series last weekend. OSU knocked off Colorado 2-0 last Friday and Utah 3-1 on Sunday. WSU is 2-0-1 against those two teams this season.

“Oregon State is a spitting image of Washington State in a sense,” Shulenberger said.

The Ducks went up against the same opponents as OSU last weekend but did not fare as well. Oregon tied Utah 1-1 last Friday before losing to Colorado 1-0 on Sunday.

WSU is 14-5-7 against the Ducks since 1989. Oregon has not beaten the Cougars since October 2011, with the last eight contests ending in either a WSU win or a tie.

The crimson and gray have been led offensively this season by senior forward Elyse Bennett. The Wisconsin-native leads the team in both goals and points with five and 11, respectively.

Shulenberger said that the key to winning these next games is picking it up offensively.

“We got to score some goals, flat out,” Shulenberger said. “We’re a good soccer team and we are not scoring goals.”

Senior goalkeeper Marissa Zucchetto has allowed just nine goals in her 837 minutes played this season. Zucchetto also had four matches in which she didn’t allow a single goal.

After their two-match homestand against the two Oregon schools, the Cougars will play their last game of the regular season when they host the Washington Huskies in the Apple Cup on April 16.

“Out of the three games left, the Oregons and the Washingtons, it’s a lot of similarities,” Shulenberger said. “I do think they’re all winnable though.”

Catch the Cougars in action this weekend against Oregon State at 7 p.m. Friday and Oregon at 1 p.m. Sunday on the Lower Soccer Field in Pullman. The matches can be watched on the WSU Live Stream and the live statistics can be followed on StatBroadcast.