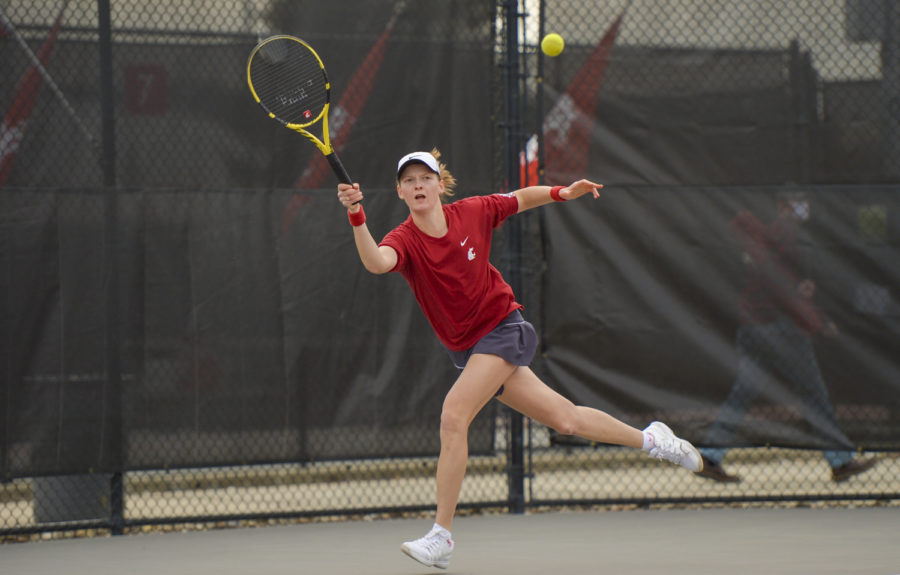 Then-senior Michaela Bayerlova returns the ball during a singles match against Arizona March 14, 2021 at the WSU Outdoor Tennis Courts.

The WSU tennis team is set to host the Oregon Ducks on Sunday at the Outdoor Tennis Courts in Pullman.

WSU is coming off a tough weekend of competition where they went 1-3, falling to BYU, Colorado and Denver with their only win coming against Utah.

After this past weekend, WSU’s record went to 11-11 for the season and 3-5 in conference play. The highlight of the weekend was fifth-year Melisa Ates moving up to No. 3 on WSU’s all-time singles win list with her 103rd career win.

Despite the struggles from last weekend, head coach Lisa Hart is optimistic that her team has learned from the losses.

“Obviously to lose all those close matches can kind of bring you down,” Hart said. “But I’m really proud of our players; they seem positive and ready to get back to work and focused on what’s next.”

Oregon is ranked No. 44 nationally with a 12-5 record and a 5-3 record in Pac-12 play. The Ducks sit in fifth place in the Pac-12 standings while the Cougars are tied for seventh at 3-5 in conference.

With a win over Oregon on Sunday, WSU has a chance to rise above the Washington Huskies (3-5) and Arizona State Sun Devils (3-4) in the standings.

The Ducks are coming off a strong 4-3 win this past weekend where they defeated the No. 38 Stanford Cardinal for the first time in program history. Preceding that win, the Ducks fell to the No. 23 Cal Golden Bears 3-4.

Before facing the Cougars, Oregon will travel to Seattle to face the Huskies on Friday. WSU previously lost to UW 2-5 on Feb. 19.

WSU just edges out Oregon for number of wins historically, as they have a 16-14 winning record against the Ducks since 2000.

Hart said her team has a strategy to try to rebound from their losses this past weekend.

“I think we’re just going to really focus on just one point at a time, one ball at a time,” Hart said.

WSU’s senior Michaela Bayerlova is ranked No. 86 nationally, according to the Intercollegiate Tennis Association. Bayerlova’s 2020 singles record of 13-0 was a lot more impressive than her current record of 9-7, but Hart is still confident in her abilities.

“I’m excited to see what happens for her in the last month,” Hart said.

Oregon has a ranked singles player of their own, as freshman Janice Tjen is ranked No. 121 nationally. Tjen is from Indonesia and in 2019 took home nine titles in junior tournaments.

After their match against Oregon, WSU will host Gonzaga in their last home match of the season and then go on a four-match road trip before the Pac-12 championships.

Don’t miss out on these two games as the Cougars face Oregon at 11 a.m. Sunday. There is no livestream of matches at the Outdoor Tennis Courts, but the match statistics can be followed on StatBroadcast.