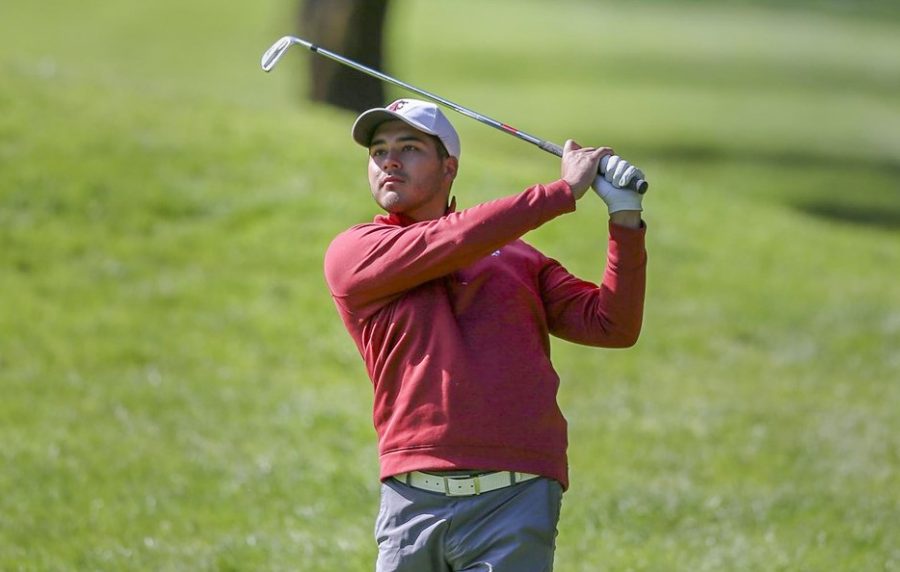 Then-senior golfer Daniel Kolar watches his shot as it heads towards the green.

The WSU men’s golf team will head back down south to participate in the El Macero Classic in El Macero, California from April 10-12.

The Cougars are getting back in action after almost two weeks off. WSU’s last tournament was The Goodwin in Stanford, California from March 25-27.

At the Stanford Golf Course, the Cougars placed in a tie for 13th on the team leaderboard, as the Cougars finished the tournament shooting an 864 (+24).

Redshirt junior Max Sekulic was the top performer for the Cougars as he ended in a tie for 33rd on the player leader board and carded a 213 (+3) over 72 holes of play. The Canadian shot a score of 69 (-1) in the first round, which was the best round out of any Cougar throughout the tournament.

The Cougars are also coming off of a second-place finish at The Joust in Riverside, California. That final score marked the highest team finish outside of Pullman in seven seasons. WSU was led by fifth-year Nicklaus Chiam, as he posted a 216 (+6) through the three rounds.

Head coach Dustin White said after the team’s impressive finish at The Joust that he can see them improving.

“We took another step in the right direction this week,” White said. “The wind was up, and the course played tough. Our guys stood up to the challenge and played some gritty golf.”

After the El Macero Classic, the Cougars will move on to the Pac-12 championships from April 26-28 in Santa Rosa, California at the Mayacama Golf Club.

Although last year’s Pac-12 championships were canceled, the Cougars placed in 12th place in the tournament back in April 2019.

The El Macero Classic will start on April 10 and end on April 12. The live statistics of the event can be followed on GolfStat.