Cougars win two out of three against Utah, move up to tied for ninth in Pac-12 standings 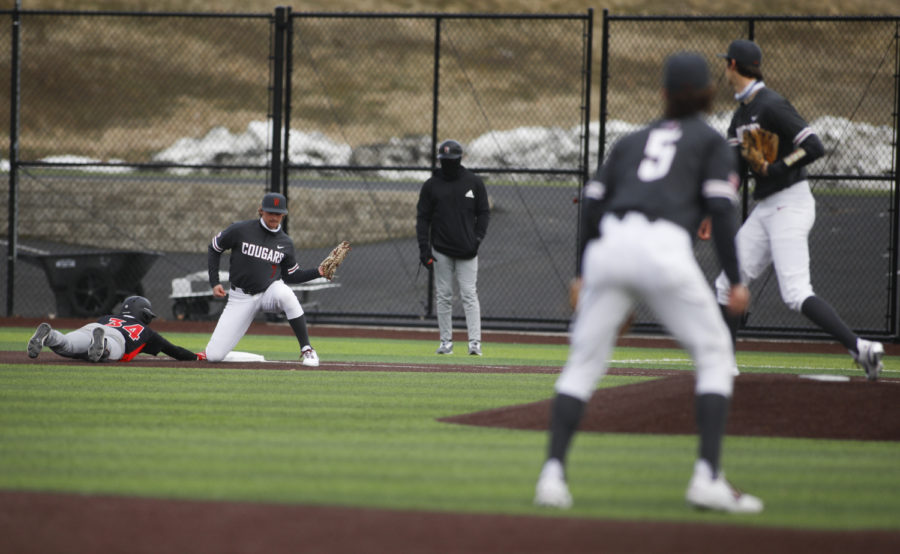 Junior infielder Kyle Manzardo catches a pass in an attempt to pick off a runner during the game against Seattle U on March 6 at Bailey-Brayton Field.

WSU baseball won two out of three games against the Utah Utes this past weekend, winning 12-7 on Friday, losing 10-7 on Saturday and winning 5-3 on Sunday.

The Cougars (16-11, 4-8) won their first Pac-12 series of the season to bring their conference standing to a tie with Utah for ninth.

Saturday, however, WSU had some late-inning troubles. Utah was able to score seven runs in the bottom of the seventh to give the Utes a 10-7 lead after the Cougars were up 7-3.

Junior right-handed pitcher Zane Mills went six innings strong, striking out seven batters. The Cougars’ demise was five errors on the defensive side of the ball to ultimately give Mills nine unearned runs on the afternoon.

WSU was able to score six runs in the fourth inning, but they dug themselves into a hole with defensive errors and dropped their eighth conference game this season.

He was relieved by junior right-handed pitcher Dakota Hawkins, who went four innings allowing three hits, one run, and striking out two batters as well. Hawkins ultimately picked up his second win on the season.

Junior infielders Kodie Kolden and Kyle Manzardo both had two-hit games on Sunday. Senior outfielder Collin Montez drove in two runs to give the Cougars the edge in the series finale.

The Cougars look to continue their offensive production in their single game at 3:05 p.m. Tuesday against the Gonzaga Bulldogs. WSU’s next Pac-12 face-off will be a three-game series against the Arizona Wildcats from Friday to Sunday.

The game against Gonzaga can be seen on the WSU’s live stream and pitchers/starting lineups will be announced one hour before the start of the game.