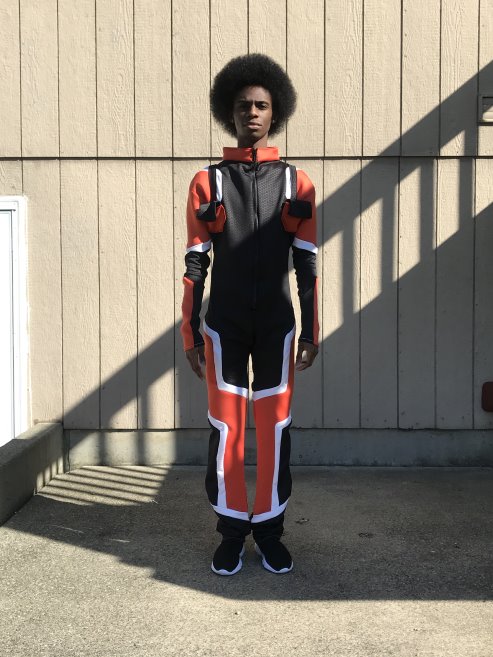 The show was filmed April 1 and 2 and streamed on Youtube at a later date. Lou said the designers had professional photos taken of themselves and their models in addition to the show.

One participating designer, senior Brandon Dunbar, said he originally pursued a business degree at the University of Washington, Tacoma before deciding to study apparel design at WSU.

Dunbar said he switched majors because he loves to be creative and expressive.

“Zeitgeist” means spirit of times and can be interpreted in many ways, he said. The fashion show was a requirement for his apparel merchandise design class.

The course is provided in person. However, Lou said students did have the option to participate remotely.

Lou said one difficult aspect about teaching the class virtually is providing feedback to students if she is unable to see or touch the garments.

About 15 seniors in the class created a minimum of three looks for the fashion show. Students chose their target market and designed their brand, which included logos, material, color and garment pattern, she said.

Lou said students had full creative control over their collection.

Dunbar started creating his five-piece collection in January and it took him about three months to finish. Dunbar said his collection revolves around life on Mars. He was inspired by Elon Musk and SpaceX’s goal to get humans to Mars.

He wanted his Mars collection to be both realistic and fashionable. Dunbar said he also wanted to tell a story with his pieces.

“I wanted this collection to be more like fashion — ready to wear,” he said.

The collection is split into three phases: colonization, evolution and speciation. The first phase, colonization, is when humans are first traveling to Mars and trying to make the planet habitable, Dunbar said.

The second phase, evolution, is when humans are adapting to the planet. The third phase, speciation, is when new species of humans emerge and become Martians, Dunbar said.

The first outfit Dunbar made was a space bodysuit. This outfit took the longest to create because there were so many pieces to it, Dunbar said. He had to create various patterns that included multiple angles and sharp lines.

The easiest outfit Dunbar said he made was a Mars loungewear set. The set consists of a long sleeve shirt and shorts.

“I’m excited about my collection because I worked so hard in designing this collection,” he said.

Dunbar said he also created a starship rocket mini skirt that symbolizes how humans will get to Mars. Models for Dunbar’s collection, Dunbar’s brother and friends, had bionic face shields to protect themselves from the harsh elements on Mars.

Lou said Dunbar did a good job coming up with a creative idea, drawing various pieces and constructing his garments.

Students will present their collections April 17 via Zoom to judges from the industry, WSU faculty members and employees. Afterward, there would be a question and answer portion, Lou said.

“I’m really proud of them … they spent a lot of effort and time on their senior collection,” she said.