Cougars to host Gonzaga before hitting road for rest of season 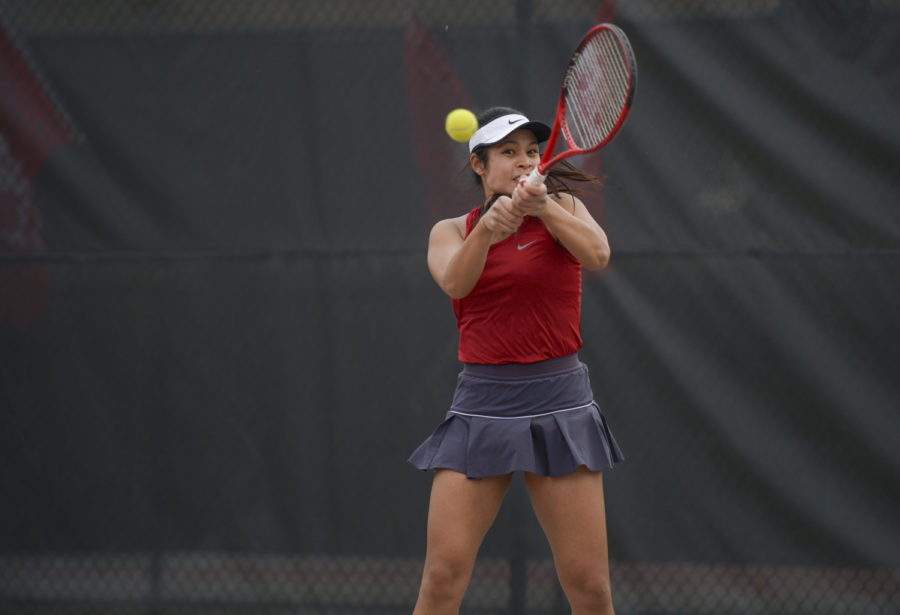 Sophomore Pang Jittakoat makes a backhand return during a singles match against Arizona March 14 at the WSU Outdoor Tennis Courts.

The WSU tennis team was victorious in their home win over the No. 37 Oregon Ducks on the Outdoor Tennis Courts on Friday.

After struggling to get the doubles point in the past few matches, WSU was able to secure the first point of the event. Doubles play started off with a decisive win from WSU’s Pang Jittakoat and Fifa Kumhom, who won their set with a decisive 6-1 victory.

“I think they really helped set the tone for the doubles,” head coach Lisa Hart said. “It can be a huge momentum boost I think when you can get that doubles point.”

WSU’s Melisa Ates and Hikaru Sato were leading their doubles match against Uxia Martinez Moral and Rifanty Kahfiani when their match was left unfinished due to the doubles point being secured.

Martinez Moral defeated Kumhom 6-2, 6-4 in the third singles match to tie the event 2-2. WSU rebounded in the fourth set when Jittakoat won against freshman Myah Petchey with a 6-2, 6-1 victory.

Ates secured the victory for the Cougars when she defeated sophomore Allison Mulville 6-3, 6-3 in the fifth spot. That put WSU up 4-2 and clinched the team win.

“[Ates] clinched the match for us, you know, she continues to just be really solid,” Hart said. “She played really well.”

Even though the match was over, the last game played out with Kafiani defeating Sato in a three-game set 7-6, 2-6, 7-5.

The victory against a conference contender will help the Cougars in seeding when they enter the Pac-12 tournament.

Next up for the Cougars is a home game against Gonzaga. The match will be played at noon Tuesday on the Outdoor Tennis Courts. After that, the Cougars travel to Seattle for a meet against in-conference opponent University of Washington at 1:30 p.m Friday.