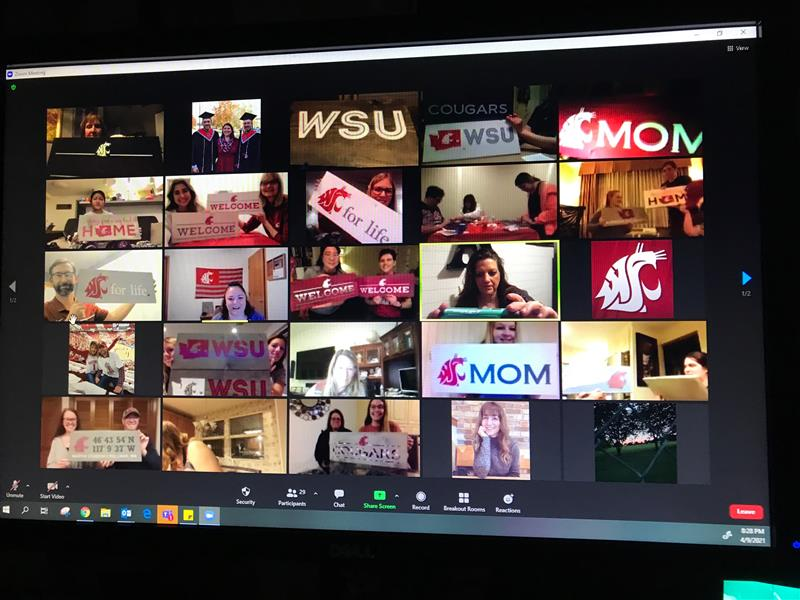 Paint night and the Chosen Coug Award ceremony were the most popular events during this year's virtual Family Weekend.

WSU hosted its annual Family Weekend through an online setting this year, with various events and activities to attend.

Previously, Family Weekend was split into Mom’s and Dad’s Weekends. The name change occurred to promote inclusivity, according to a Daily Evergreen article.

Kari Sampson, WSU director of development and student affairs, said Family Weekend was a good opportunity to connect and have conversations with Cougars from all around.

“It felt like you were in the same room with each other, even though we weren’t,” she said.

Sampson said two of the most popular events were paint night and the Chosen Coug Award ceremony.

During paint night, families created wooden signs to show their spirit for WSU, she said.

“You could see all the families painting together and they were laughing and I could see all of them,” said Diana Calderon-Sandoval, WSU Pullman senior pursuing a dual degree in psychology and Spanish.

Calderon-Sandoval attended paint night and the Chosen Coug Award ceremony. She said both events were engaging, well organized and meaningful.

“If we were to be virtual again, I would definitely hop on that Zoom link and do it all over again,” she said.

The Chosen Coug Award event was special to many families and members of the WSU community. Anyone could nominate a WSU affiliate to receive this award for exemplifying what it means to be a true Coug, Sampson said.

“It was a little over an hour long, which was perfect, but it was very emotional,” she said. “I wasn’t expecting that, but it was nice to be able to see people honoring people who have helped them.”

Sampson said approximately 200 people attended each of the two events, which was a better turnout than initially expected.

Although attendance was down significantly compared to other years, Sampson said it was still a great time and has received positive feedback from many attendees.