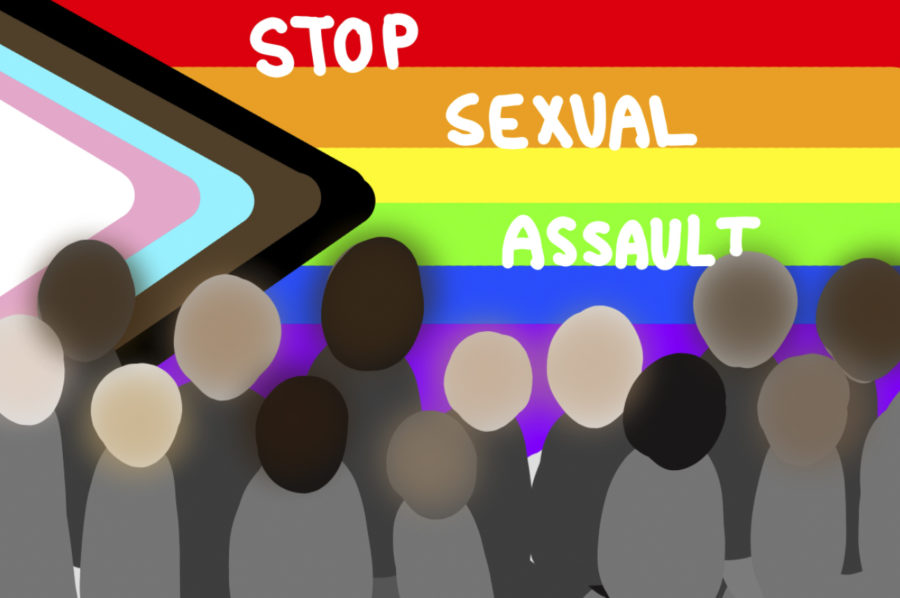 Editor’s Note: One source in this story asked to remain anonymous to prevent retaliation against them and any interference with their student experience at WSU. An asterisk identifies a source’s name has been changed to protect their anonymity

My heart is broken: not only because of the statistics that have surfaced regarding the realities of sexual violence against both men and women within the last weeks, not only because I cannot count on one hand the number of women I know who are one in five — not even because I am one in five.

I am heartbroken because my university is not a safe place, not a trustworthy place. Not only do they not educate our student community in a meaningful way on the necessity of consent — they don’t hold us accountable when we break the rules, when someone makes another woman one in five.

But we are not simply statistics. We are not a case number, or a silent victim or a victim at all. We are not a voice that can be swept under the rug or left behind to trail in the wake of non-answers and deepened confusion.

We are students, community members … Cougs.

And we have been let down by Executive Policy 15, or EP 15, at this university, and by every investigator and administrator who claims to support students. I say “we” because every story like this affects the way those who are deemed vulnerable see the world.

According to the WSU Executive Policy Manual, EP 15 refers to sexual misconduct, sexual harassment and discriminatory harassment that can harm individuals or violate individual rights.

Students like Addy DeMarsh, senior music performance major, are helping to cast a light on the realities of this process. As one member of the group of women who came forward about their ongoing eight-month-long EP 15 case, DeMarsh said she is beyond frustrated with the lack of communication and follow-through on the university’s part.

These women are only a few who have experienced WSU’s failure in their EP 15 process firsthand. And many more would rather remain anonymous and avoid the process altogether because of preexistent lack of trust.

Holly Ashkannejhad, director of the WSU Office of Compliance and Civil Rights and Title IX coordinator, said she recognizes there is a lag in the process caused by frequently updated procedures.

I think this is a positive step. One that needs more advertisement than it is getting. Students should be made aware of our university’s reporting process and be a greater part of its creation and revision.

On a larger scale, people have been attacked for coming forward about sexual assault or harassment since I can remember. And what sympathy we do see is given to the perpetrators, rather than the victims.

Sadie* is a WSU student and survivor of sexual assault.

“I feel like we are taught to keep quiet if it’s a gray area because there is so much emphasis on saving other people’s futures and not enough on protecting ourselves,” Sadie said.

In our own community, we should be teaching students that they can expect more from WSU’s sexual assault education and conduct processes.

There is a chasm that has yet to be crossed by the EP 15 policies, “We Support You” statements and educational attempts like “Booze, Sex, and Reality Checks” at Alive sessions in the summer.

Our community clearly needs much more education and a deeper understanding of the standard WSU holds all students to. This starts with programs like the aforementioned “Booze, Sex and Reality Checks” and the many more educational programs we need to add.

Do we simply allow the gray area of a lack of education to persist? Do we maintain the system that allows students accused of an EP 15 violation to slip through the cracks?

“I think many of us don’t know enough about sexual assault and what qualifies … and just in my experience, I don’t think I realized until way after,” Sadie* said. “At that point, if I brought it to the university, I don’t think they would have been able to do very much.”

One grave error in our education system as a whole is the lack of education provided to students on what sexual assault looks like, as well as how to go about reporting such a traumatic and often confusing experience.

“Had my experience been university-related, I know that I would not have felt comfortable involving them in the process at all,” Sadie*said. “It has to do with the way that we’re taught about the [reporting] process … and it was so heavily emphasized that it’s still very unlikely that any sort of justice is going to happen out of it.”

If, in the end, a case like DeMarsh’s can be left to dwindle out because the process lacked a deadline for the accused student to respond, then that is not support, nor is it justice.

Unfortunately, this is the kind of situation that causes the lack of trust between students and our administration. In fact, it is forcing victims to relive the theft of their trust on a much greater scale: their university community.

But if there can be one positive thing taken from this story, it is that our university can change. And students are the ones who have the greatest power to change it.

“Last year when we had the new Title IX regulations and our procedures changed, it created some additional work for investigative staff … that is turning out to be really time-consuming,” she said. “So recognizing that, we are actually right now updating our procedural guidelines to improve the efficiency of [the investigative process].”

Ashkannejhad said CCR is planning to open a student feedback group for those who want to submit suggestions for updating WSU’s reporting process.

We could also do with more than four members of the investigative staff. When we have close to 600 EP 15 complaints in a year, there is no realistic way to expect swift responses from so few people.

Besides the clear need for more trained staff, there are two takeaways from the recently publicized case that DeMarsh believes we should call upon our university to change.

The first would be to make a deadline for the respondent’s — or the accused party’s — response so cases can move swiftly.

In the interest of protecting complainants — or the accusing party — and attaining justice for the actions of the respondent, this is an absolutely necessary aspect of this process. We cannot go without it any longer at WSU.

“Every time we reached out to the investigator regarding any updates in our case, he told us, ‘No we don’t have any updates because of the lack of participation by the respondent,’” DeMarsh said. “AKA, he doesn’t want to respond, so he’s not going to respond.”

This procedural gap is causing more frustration for the complainants. And I wonder how much shorter their case might have been if the accused had been given a deadline to answer for his actions?

“When I came to the institution, there was a strong feeling … that these processes were hard on students and we needed to be as student-friendly as possible,” she said. “So they decided against putting in a strict time frame for [both the complainant and the respondent] to participate.”

I can empathize with the push and pull of wanting to do right by the complainant. And I honestly believe that the university had our best interest in mind when first deciding to do without deadlines.

However, it is this lack of a deadline that allowed the accused student, in this case, to go without punishment for their actions. It is an example of letting someone who has broken the rules of our university to get out of it unscathed — it is unjust.

The second takeaway is this: ensure that all complainants are receiving the same information and communication from university investigators.

Ashkannejhad said during the investigative process, the complainant is able to decide how much communication they want about the case.

However, when I spoke with DeMarsh, her experience was not what she had been told to expect.

“[Ashkannejhad] said that investigators ask the victims or respondents how much communication they want in the beginning [of the process],” DeMarsh said. “I will tell you that was not the case for us.”

WSU’s current EP 15 reporting process is confusing, lacking in clear communication and tedious in the pursuit of justice.

This process also supports the idea that if you can just ignore those who try to hold you accountable for your horrible choices, you can get away with it.

Your students deserve justice. Make the changes so that we can get it.

“For me, coming out about this and saying something about the process was hopefully to shed some light on how messed up it is right now,” DeMarsh said. “We need things to change so that nobody else has to go through what I went through.”

It is not any survivor’s job to shoulder more work or to support all of those around her who have experienced the same hurt. This is the university’s responsibility.

“It was hard enough to get through that situation, but what’s almost worse is the fact that our university didn’t support us through it,” DeMarsh said. “So I don’t care if they feel bad. Make a change. That’s all I’m asking.”