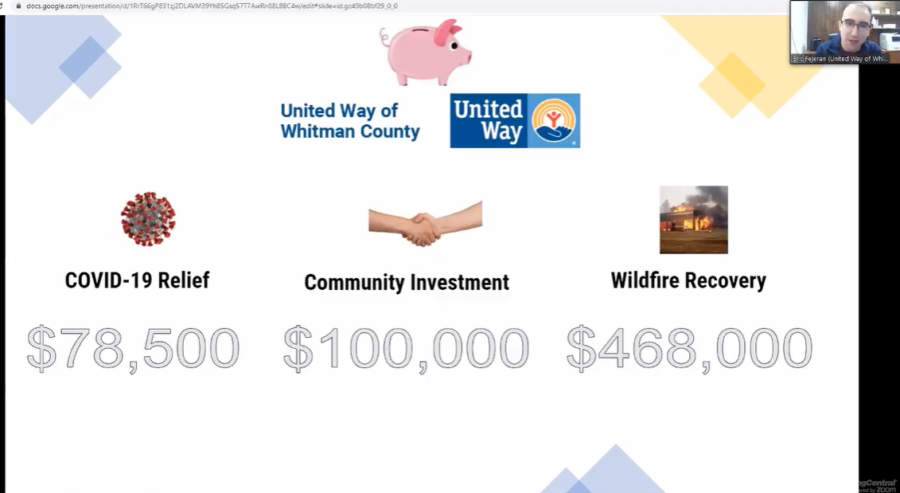 United Way of Whitman County has distributed $468,000 for wildfire recovery in the Malden and Pine City communities.

Pullman residents expressed concerns about the annexation of property near SE Johnson Road during a City of Pullman public hearing Tuesday night.

Frank Motley of Two-GM and Bob Perdue of Nelson Partners applied to annex 48.3 acres of land into the City of Pullman. The land is currently used for agricultural purposes.

This proposal does not serve as a decision about the use of the land. No application has been submitted for whether a housing development is in the works or not.

Council members requested further information about zoning requirements from Pullman planning staff before a decision is made. Discussions will resume at the April 27 council meeting.

“We’re trying to annex the property into the city to follow the guidelines and develop the property with the guidance of Pullman,” Perdue said.

“We need to wait and see what our new normal becomes after the pandemic,” Pullman resident Beth Burns said. “We don’t need a glut of empty apartments.”

Others shared concerns about an increase in traffic on Bishop Boulevard. Pullman resident Ginny Hauser said the flow of traffic would make it difficult to access hospital services and it would impede pedestrian access.

Pullman resident Lennis Watts said before COVID-19, the roadway near the proposed annexation was usually backed up for a mile during WSU events, like football games and Mom’s Weekend.

If the developer went forward right now with plans, the tax revenue generated would go toward Whitman County rather than Pullman, Councilmember Dan Records said. The City of Pullman would not have a say in the land-use decisions without annexation.

City Planner RJ Lott said a traffic study could be provided after an application for development is submitted.

“If we denied the petition to annex, [the developer] can turn around tomorrow and submit a development application to the county, and then [the council] would be out of the involvement,” Records said.

Eric Fejeran, director of United Way of Whitman County, provided an update for fundraising efforts made in 2020.

He said the nonprofit has distributed $468,000 for wildfire recovery in the Malden and Pine City communities.

In September, about 80 percent of Malden buildings were lost due to a wildfire. Fejeran said the community is one of the most impoverished areas in the county.

Two families received new houses with the help of the Western Anabaptist Mission Services. Each house cost about $50,000. The group is from St. Ignatius, Montana.

The lowest bid was about $20,000 more than the city engineer’s estimate, Haley said. The project will begin as soon as possible and will be completed by July.