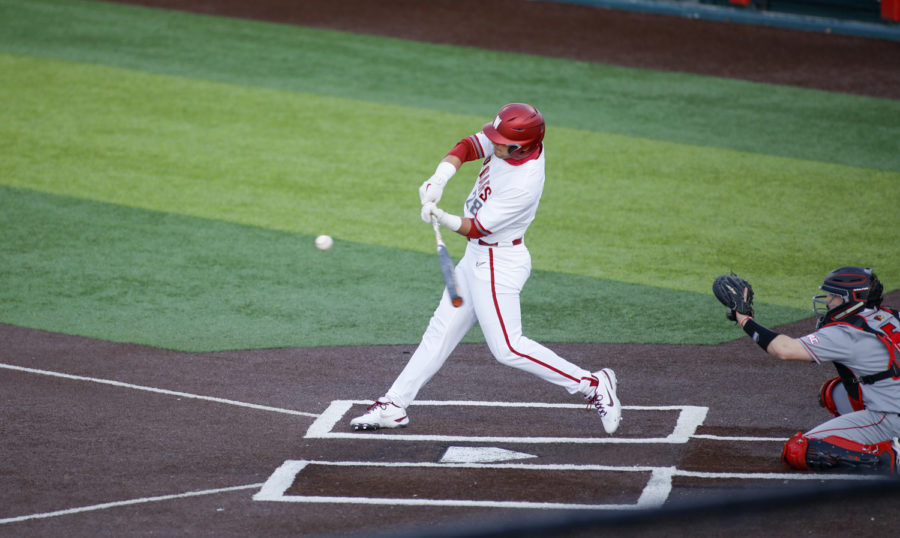 Senior outfielder Collin Montez hits the ball during the game against Seattle U March 5 at Bailey-Brayton Field.

The contest ended 6.1 innings after a fielder’s choice for Gonzaga left an injured Bulldog on the field, and the game was called off due to injury.

The Bulldogs (20-12, 9-3) are now getting ready for their upcoming three-game series against Pepperdine University this weekend.

Freshman right-handed pitcher Kolby Kmetko got the start for the Cougars on Tuesday and went 2.1 innings. Kmetko allowed three hits and two earned runs before being replaced by redshirt junior Will Sierra.

Gonzaga started scoring off with a two-run home run from junior infielder Brett Harris that brought in senior outfielder Guthrie Morrison to give the Bulldogs an early 2-0 lead.

The Bulldogs then expanded on their 2-0 lead with a sacrifice fly out from senior infielder Andrew Orzel that brought in junior infielder Ernie Yake to give Gonzaga a 3-0 lead.

Back-to-back walks with the bases loaded for Gonzaga brought in Harris and junior catcher Tyler Rando to stretch the lead in the fifth inning to 5-0.

Gonzaga then added on to their lead with a couple of two-run singles in the fifth inning from freshman infielder and outfielder Grayson Sterling and Yake. The Bulldogs’ seven-run fifth inning gave them a 9-0 lead.

The bullpen for the Cougars seemed to struggle to find the strike zone throughout that fifth inning, with a total of seven walks and three pitchers coming into that inning. Sierra, freshman pitcher Elias Farland and sophomore pitcher Ethan Ross all struggled throughout that inning, leading to seven runs coming through the plate for Gonzaga.

The bats for WSU seemed to be very lackluster, with the team only mustering up four hits through five innings. The Cougars seemed to have their bats in the early innings this past weekend, and in this contest, they disappeared for most of the game.

Junior first baseman Kyle Manzardo added to his historic season with one hit in the third. Senior infielder Jack Smith provided the Cougars only extra-base hit with a double in the second inning.

The Cougars look to move forward after Tuesday’s loss heading into a three-game series against the No. 16 Arizona Wildcats that starts on Friday with the series finale on Sunday.

First pitch from Bailey-Brayton Field is set for 3:05 p.m. Friday, and lineups and starting pitchers will be announced one hour before game start. The game can be watched on WSU’s Live Stream and the live statistics can be followed on StatBroadcast.