This week covers top half of list that will rank best quarterbacks to wear crimson, gray 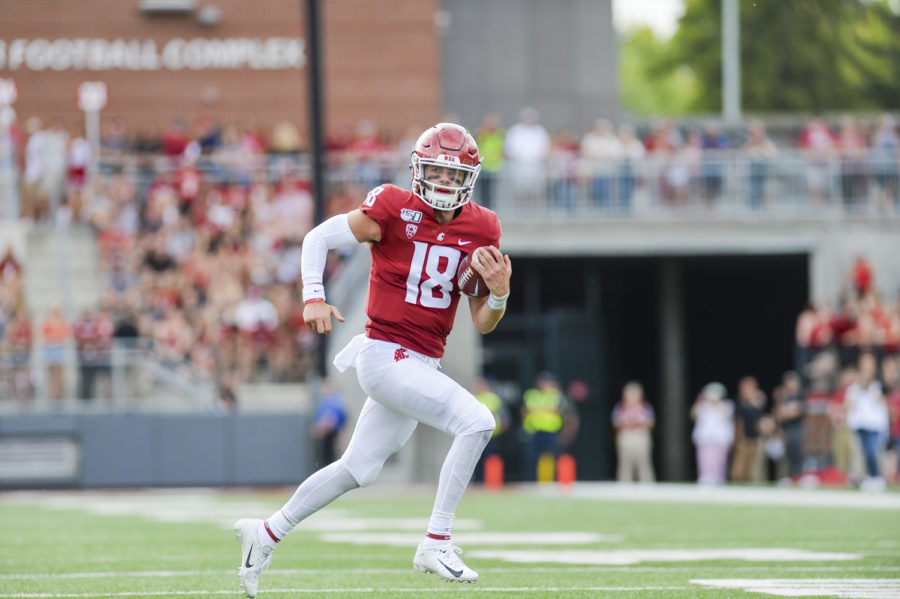 Anthony Gordon was the team’s starting quarterback from 2018-19.

Although WSU has never really been a major powerhouse in college football, the school has produced numerous high-level quarterbacks. This is partially because of the system in place under former head coach Mike Leach and partially just good fortune.

So, with a quarterback battle going on through the spring, now is as good a time as ever to take a look at the top quarterbacks to ever grace the field inside Martin Stadium. In the first of this two-part series, we examine the No. 10 through No. 6 slots on the list.

The most successful of those seasons for the team was 1983 when the Cougars went 7-4. However, Rypien only made four appearances that season.

Rypien’s best year at WSU came in his redshirt senior year. The Cougars finished 4-7, but Rypien would put up career-best numbers with a completion percentage sitting at 58.2 percent, over 2,000 passing yards, 17 total touchdowns and 12 interceptions.

Rypien is also one of just 11 quarterbacks in school history to have a 400-yard passing game.

The Calgary native really cements his place on the list because of what he did following his time in Pullman. Rypien was drafted in the sixth round by the then-Washington Redskins.

In his time in Washington, Rypien won two Super Bowls, one as a back-up and one as the starting quarterback and eventual Super Bowl MVP.

Gesser was the final quarterback of one of the longest chapters in WSU history: the Mike Price era. Playing just six games his freshman season, Gesser would return to start the first nine games of the 2000 season before missing the final two games of the year.

The Honolulu native is among the most decorated players in Cougar history. He sits second in the program’s record book for wins at quarterback. He is the only player elected as a captain in three consecutive seasons and was named Co-Pac-10 Offensive Player of the Year in 2002.

He would rack up a First Team All-American selection, three All-Pac-10 selections and four All-Pac-10 Academic selections during his time on the Palouse. On top of all that, Gesser finished seventh in the 2002 Heisman voting.

When he left Pullman, Gesser held the WSU career records in passing yards, pass attempts, completions and passing touchdowns, all of which he currently sits fourth in.

The success was not limited to his personal stats, however, as he led the team to back-to-back bowl games for the first time in program history, as the Cougars won the 2001 Sun Bowl and lost the Rose Bowl following the 2002 season.

Gesser’s career was sort of an inverse of Rypien’s. He was a superstar in Pullman but went undrafted. He never touched an NFL field and only briefly touched the field in both the CFL and the AFL. Gesser had a brief coaching career but resigned from WSU in 2018 on the heels of sexual misconduct and harassment allegations.

Bledsoe’s career at WSU was a storied one. His first two seasons in Pullman were not something incredible for the whole team, but both seasons saw the Walla Walla native put up fantastic numbers. In each of his three seasons on the Palouse, Bledsoe had a quarterback rating higher than 120.

For his career, Bledsoe would pick up over 7,000 passing yards, completed nearly 55 percent of his passes, picked up 56 total touchdowns and threw just 34 interceptions.

In Bledsoe’s final season with the Cougars, the quarterback threw for over 3,000 yards and 20 touchdowns. It was good enough to lead the Cougars to a 9-3 record, which saw WSU finish the season ranked No. 15 in the AP Poll.

The season saw the Cougars win their first bowl game in four seasons, as well as pulling off a massive upset in that year’s Apple Cup with a 42-23 win against No. 5 Washington on national television. The season also saw Bledsoe award Pac-12 Offensive Player of the Year honors.

The bowl game was a major moment for Bledsoe, as it helped propel him to a very high draft pick. The Cougars beat the Utah Utes in the Copper Bowl behind Bledsoe’s 476 passing yards, the most in WSU bowl game history. Of those 476, 300 came in the first half of the 31-28 win.

Bledsoe decided to leave Pullman after that 1992 season. He became the first-ever Cougar to be selected number one overall, joining the New England Patriots.

Bledsoe put together a good NFL career, winning a Super Bowl after losing his starting job to Tom Brady. He added four Pro Bowl appearances and a spot in the NFL record books with the most passing attempts in a single game, tossing the ball 70 times in a 26-20 win over the Minnesota Vikings in 1994.

Since his retirement, Bledsoe founded and ran the Doubleback Winery.

Gordon could have easily been higher on this list if he had played more. He played his freshman season at City College of San Francisco, where he put up nearly 4,000 yards.

Then, after transferring to WSU, he redshirted during the 2016 season and did not touch the field in 2017. In 2018, Gordon backed up Gardner Minshew, only touching the field twice and throwing the ball five times.

In 12 of 13 games, Gordon surpassed the 300 passing yard mark. The marquee game for Gordon that season was probably the Pac-12 opener against UCLA. WSU lost 67-63 to the Bruins, but Gordon racked up 570 yards and a school-record nine passing touchdowns.

The season saw WSU finish with a record of 6-7 in Mike Leach’s final season and the one year of Gordon playing at quarterback.

Following his time on the Palouse, Gordon went undrafted but signed with the Seattle Seahawks. After being waived the following September, Gordon went on to sign a reserve/futures contract with the Kansas City Chiefs.

Brink grew up in Pac-10 country, but not in the shadow of Martin Stadium. The quarterback spent his adolescence in Eugene, Oregon, home of the Oregon Ducks.

Brink joined WSU in 2003 but redshirted that first season. Despite not showing much in the way of team success (the Cougars never made a post-season appearance under Brink), the quarterback had a ton of individual success on the gridiron.

In his final two seasons, Brink was named as an All-Pac-10 Second Team selection. Perhaps the most significant notch in the historic and impressive belt is his performance in Apple Cups. In his four games against Washington, Brink passed for 1,250 yards, eleven touchdowns, no interceptions and completed 62.1 percent of his passes. He remains the only quarterback in WSU history to defeat the Huskies three times.

Following his time with the Cougars, Brink was drafted in the seventh round by the Houston Texans but never made an NFL appearance. He also spent time in the CFL, making seventy appearances and nine starts.

The Cougars have had an incredible and seemingly never-ending stable of exceptional quarterback talent come through Pullman. Make sure to check back for the top five quarterbacks that have donned the crimson and gray.