Office’s goal is to draft report within 30 days, but process is often longer 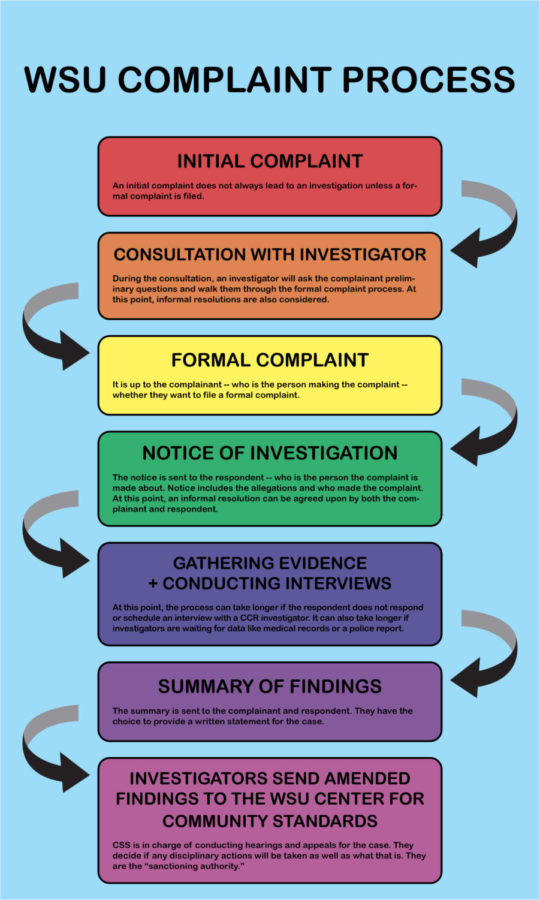 The Office of Compliance and Civil Rights' goal is to review all evidence and draft a report within 30 days after a formal complaint is filed. But it is often longer because of their “student-friendly process,” which allows students to reschedule interviews and request extensions.

The WSU Office of Compliance and Civil Rights conducted 60 investigations out of the over 500 complaints received.

After a complaint is filed, the complainant — who is the person who made the complaint — will have a consultation with an investigator. During this point, complainants are asked about the initial complaint, whether they want to make a formal complaint and how that process would look like, she said.

Several complainants often choose to not make a formal complaint. This could be due to various reasons, including the complainant being worried about impacting their friend group if the people involved in the complaint are friends or the complainant not wanting to go through the investigation process, Ashkannejhad said.

In cases of sexual assault or sexual harassment, Ashkannejhad said CCR’s best practice is to put power back in the hands of the survivor. If they want an investigation, then there will be one. If not, then the process will not continue.

Very rarely, CCR will continue with an investigation if multiple reports have been made about the same person, she said.

Title IX does not allow a school conduct board to consider any statements made without the complainant agreeing to be cross-examined during a conduct hearing, which is led by the WSU Center for Community Standards, she said. This makes it vital for complainants to be involved in the process because a conduct board cannot review a case without them.

This can be scary for some people, she said. But more often than not, once someone files a formal complaint, they want to proceed with that complaint.

After being notified of the investigation, investigators conduct interviews with the complainant, respondent and any witnesses, Ashkannejhad said.

At this point, the complainant and the respondent can agree to an informal resolution, she said. Informal resolutions can include provisions for one or both parties, such as taking responsibility for the allegations, agreeing to a suspension or engaging in educational opportunities.

However, if one party does not want to agree to the resolution, the investigation process will continue, she said.

In some cases, a respondent will not respond to the notice or their response will be a short written statement, Ashkannejhad said. But a conduct hearing can proceed without the respondent present or participating.

After CCR investigators completely gather all relevant evidence for a case, the parties involved will be allowed to review the evidence and provide a written statement to the case if they want, Ashkannejhad said. The investigators will then report all findings to CCS.

CCS is in charge of conducting hearings and appeals for the case. The CCS board will determine whether there is enough evidence to prove the respondent violated WSU’s student code of conduct, she said.

“They’re the sanctioning authority,” she said.

It is CCR’s practice for investigators to ask complainants how often they want to be contacted. Sometimes complainants want weekly updates and sometimes they do not, Ashkannejhad said.

“Other folks will say, ‘Every time you contact me, it ruins my day, it makes me relive it. I don’t want to communicate with you until we’re at the next major stage of the process,’” she said.

Ashkannejhad said CCR’s goal is to review all evidence and draft a report within 30 days after a formal complaint is filed. But it is often longer because of their “student-friendly process,” which allows students to reschedule interviews and request extensions. The process can also be lengthened if CCR is waiting to receive evidence like medical records, police reports or more witnesses.

“Somebody might experience frustration and you know they’re frustrated that witnesses aren’t responding for some reason, or they’re trying to get evidence and they’re having trouble with that,” she said. “But, you know, that’s what we try and prepare people for up front because it is a process. And we’re here to help you through that process.”

The process can also be longer than 30 days because investigators prioritize their cases. This means investigators will focus more on a case if there are safety risks or a potential for ongoing harm.

Title IX is not set in stone, Ashkannejhad said. When it was created, it did not even cover sexual misconduct, but that has obviously changed over time.

For every change or presumed improvement to Title IX, there is an unintended consequence, she said. For example, last year’s changes created additional work for investigators as they try to negotiate a possible informal resolution.

Ashkannejhad said she wants it to be clear that investigations are not getting dismissed or being swept under the rug. Students are expelled on a regular basis after they are found in violation of misconduct.

She said she does not want students to be afraid to make complaints with CCR.

“I get really frustrated if the articles are so negative that nobody’s gonna want to come to our office because that’s hurting a bunch of students,” she said. “We have a lot of people who’ve dedicated their lives to this work because they really, really care.”

Students can make a complaint or learn more about CCR or CSS on their websites. Information about the state’s standard of conduct for students can be found on the Washington State Legislature website.