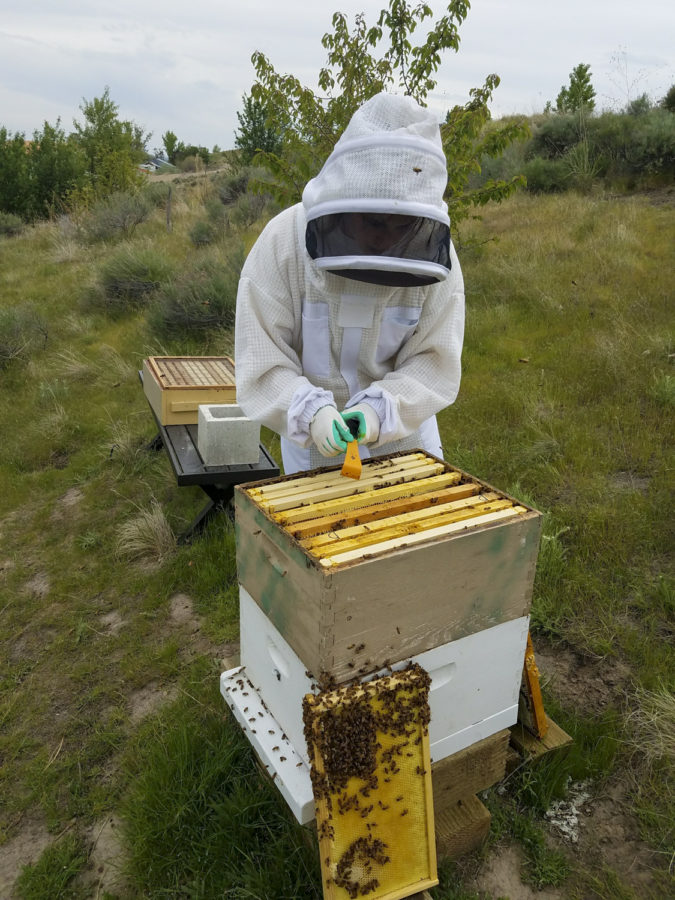 Shultz raised bees that originated from the WSU campus. She earned the Crimson Award, which is only given to top presenters.

Riley Shultz is not afraid of bees.

Honeybees are often plagued by mites, specifically the Varroa destructor, which transfers pathogens and parasitizes the bees. Shultz said she introduced the Matarhizium pathogenic fungus to improve the bees’ lifespan. The fungus could also kill mites.

Shultz found that bees with a high dose treatment lived longer. However, it did not kill a significant amount of mites.

“The biggest challenge with my experiment is how much fungus should be applied,” she said. “I definitely don’t want to hurt the bees in my trial, but I also want to have a high enough dosage that kills mites.”

Shultz presented her findings virtually at the annual Showcase for Undergraduate Research and Creative Studies on March 29. She earned the Crimson Award, which is only given to the top presenters in each research category.

She said her father was an Eagle Scout when he was a kid. He desperately wanted to earn the beekeeping badge, so he started taking care of a few hives at home.

Years later, when Shultz started high school, the father-daughter duo started caring for bees again. Their family has about nine hives and collects a couple of hundred pounds of honey every year.

“I think being able to open up the hive and share the same fascination for the insect with my dad is really cool,” she said.

Shultz came to WSU to have the opportunity to participate in the Research Scholars Program, a small cohort that encourages involvement in research starting the student’s freshman year. Now, Schultz said she helps incoming students as a mentor.

After graduation in May, Shultz will attend Purdue University to study entomology for graduate school, she said

Another SURCA winner was drawn to WSU for its research opportunities.

Olivia Hayden, fourth-year biochemistry major, said she wanted to be in the lab as soon as she stepped onto the Pullman campus.

The fever transfers from livestock to humans and farmers are commonly infected, Hayden said. Currently, there is no vaccine available in the U.S.

Hayden helped a graduate student, for the past two years, study the harmful bacteria using fruit flies as the “host,” she said.

She presented the research topic for SURCA this year and her sophomore year to bring home two Crimson Awards.

“SURCA has taught me how to explain topics to other people who may not have the same science background,” Hayden said.

Originally, Hayden said she wanted to follow in her father’s footsteps and apply for the Air Force Academy right out of high school. Instead, she decided to attend university first while being involved in the Air Force ROTC program.

She will complete her undergraduate studies next May. Hayden is preparing for the Median College Admission Test with the goal of eventually attending medical school. In the distant future, she said she hopes to commission into the Air Force.

“I want to encourage anyone who’s thinking about submitting their research or their creative project, to do it,” she said. “You can learn how to present your research to other people, which is an important skill, especially nowadays when we need to communicate difficult and complex topics to the general public.”