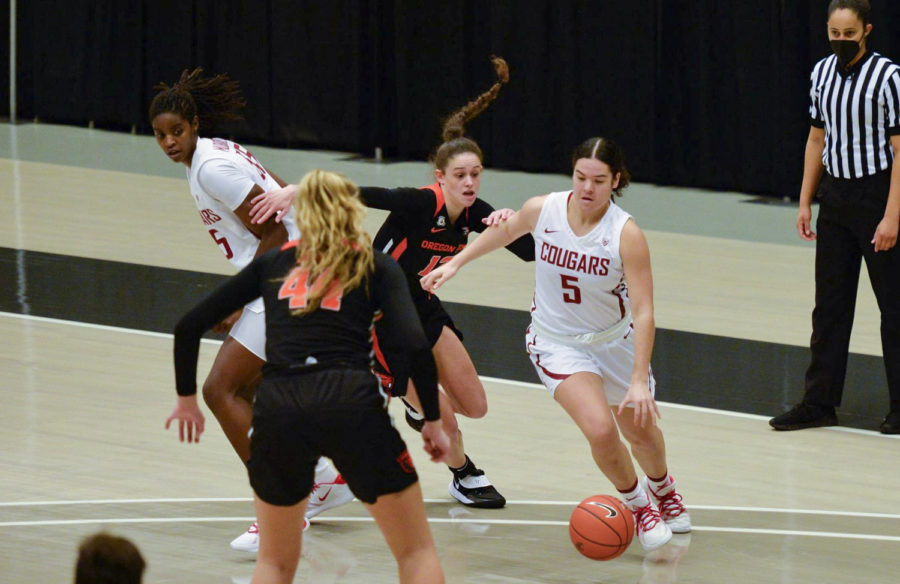 Before their 2020-21 season started, the WSU women’s basketball team was speculated to finish in last place in the Pac-12 standings. There wasn’t much buzz surrounding the team because the Cougars’ top-two scorers Chanelle Molina and Borislava Hristova had just graduated in the offseason.

The Cougars were in desperate need of a new leader to take over the team’s dynamic going forward. Freshman guard Charlisse Leger-Walker did just that, and helped the Cougars defy all expectations and even make history in the process.

Charlisse, born in Waikato, New Zealand, gathered attention from WSU throughout her high school career as she led the St. Peter’s School Cambridge women’s basketball team to four national championships. Along with becoming the youngest player to ever play for the New Zealand women’s national basketball team, Charlisse had some considerable momentum going into her collegiate career.

Charlisse’s sister and senior forward, Krystal, was already playing in America for the University of Northern Colorado Bears while Charlisse was in high school. Charlisse said she was in talks with WSU years before her freshman season. However, once Krystal transferred to WSU in 2019, Charlisse made the decision to be a Cougar.

“That was a big extra factor on top of what I was already looking at,” Charlisse said. “When [Krystal] transferred, that definitely pulled me more towards WSU.”

Charlisse and Krystal continue to practice and train with each other to this day. Krystal said the workouts can be quite physical at times. However, that physicality behind some of their workouts is solely from the spirit of the game and that they always want to improve each other.

“It’s super cool to go against her and just not hold back,” Krystal said. “Not taking anything to heart or too personally because we just know what each other’s intentions are, it’s just there to support and make each other better.”

Both Charlisse and Krystal said the team felt a huge sense of motivation when they saw the preseason polls. Krystal had already been a vocal leader on the bench when she sat out during the 2019-20 season due to the NCAA’s transfer rules, and Charlisse impressed her teammates and coaches early in the offseason. It was all about putting these elements together and standing up to the doubters throughout the season.

The Pac-12 is arguably the strongest conference in the nation for women’s basketball. Teams like Stanford, UCLA, and Arizona are constantly in the picture for conference titles and NCAA tournament runs. WSU, on the other hand, had not won a conference tournament game in almost half a decade and has not been in the NCAA Tournament in three decades.

WSU instantly turned some heads in the beginning of the season when the Cougars started off with a 6-1 record. But it wasn’t until WSU shocked the conference when the Cougars took down the No. 7/10 Arizona Wildcats off a game-winning layup from Charlisse.

Charlisse said the Arizona game ranks somewhere in the top-three throughout her career. However, she is happier that the team achieved the upset over anything.

“That was a big step for our team, and a big turning point for our team as well,” Charlisse said.

The Cougars continued to duke it out with the Pac-12’s competition as the season went on, as they finished the regular season with an 11-10 record. WSU not only achieved a win in the first round of the conference tournament, but the Cougars got the bid for an NCAA Tournament appearance for the first time in 30 years.

One trait that head coach Kamie Ethridge proudly places on Charlisse is leadership. Other than scoring 18.8 points per game this season, which ranked fourth among freshman across the country, Ethridge said Charlisse’s leadership is what should be most recognized outside her offensive talents.

Ethridge recalled an experience this season where Charlisse displayed this characteristic. After every practice, the team lines up on the half court line and attempts to make a shot from there. Whoever makes the shot gets to hold the basketball in a team photo for the Cougars’ social media accounts. Whenever a player other than Charlisse made the shot, she would do a gesture with her hands over the player’s head symbolizing a crown.

Ethridge admits this is a small example of Charlisse’s leadership, but little moments like these showcase what type of person Charlisse is.

“Her personality is just like that, she gives attention to her teammates,” Ethridge said. “She’s just a real connector, and that’s a unique quality for someone that’s so good and could have such a big ego. She doesn’t present that all, she’s a real giving teammate.”

Wecker, however, played the forward position and Charlisse plays point guard. Other than the difference in position and play style, Ethridge thinks Charlisse will continue to improve on the “very few holes in her game” and make that leap to the WNBA when Charlisse’s collegiate career is over.

As WSU suffered a first-round exit in the NCAA Tournament to No. 9 seed University of South Florida, the team is incredibly excited to capitalize on this year’s success going into next season, Ethridge said.

Charlisse received USBWA All-American Honors following her freshman season and she’s the first Coug to do so in school history. As Charlisse attracted national attention this season, she said it was definitely daunting at first. In the long run it motivates her to be a better player year in and year out.

Krystal recently made the decision to exercise her extra year of eligibility and return to the Palouse for one more season. She said she’s super excited to run it back with the team and play one more season alongside her sister.

“I’m super proud of just how she’s going, and just to stay hungry,” Krystal said. “Looking forward into her next three years, I think she can keep growing and not be too happy or complacent with how she’s done.”

Ethridge said with this season’s successes, it’ll be somewhat easier to add another piece to the team’s rotation through recruiting or the transfer portal to take WSU to the next level.

“It’s a great time to be a Coug, and we couldn’t be more thrilled and excited about not only putting a better team on the floor next year but getting to do it with our fans and Coug nation.”