Sexual assault kits take year or so to process due to national backlog; statute of limitations extended for survivors 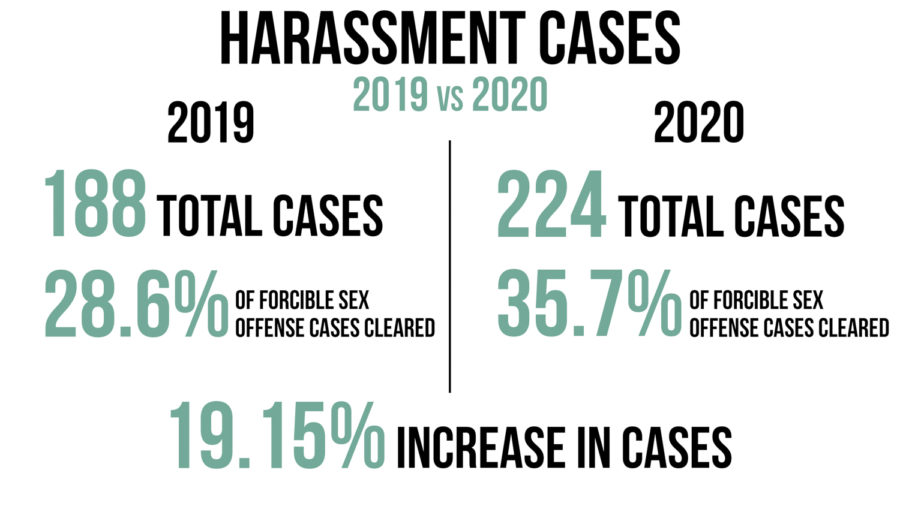 In 2019, 146 reports of simple assaults were filed, with 58 of them considered domestic violence. Pullman police arrested 105 perpetrators and 10 cases were excused.

Pullman police saw a 19 percent increase in harassment reports from 2019 to 2020, including sex offenses, aggravated assaults and blackmail cases.

Washington state law defines domestic violence as physical harm, injury, sexual assault, infliction of fear or stalking. The person inflicting harm can be roommates, relatives, dating partners, used to date or have a child with the survivor.

Simple assaults are defined as intentionally touching or hitting someone harmfully. It could also mean attempting to injure another person.

Aggravated assault is more severe. It occurs when a perpetrator attacks another person resulting in serious harm by using weapons, like a gun or knife.

In 2019, 146 reports of simple assaults were filed, with 58 of them considered domestic violence. Pullman police arrested 105 perpetrators and 10 cases were excused, according to a Pullman police report.

There were 21 forcible sex offenses reported in 2019 and 14 in 2020, according to the report. Nine of the cases were cleared by arrest and two cleared by exception.

Police arrested one person in 2020 for a blackmail or extortion case, out of the 12 total cases the department received, according to the report.

“It’s never been like CSI where we can admit the kits, then within hours we can find the person responsible for the crime,” Lambley said.

She said there is a large backlog of kits. The state evidence lab is now required to test every kit unless the victim declines. The national delay could be caused by not having enough trained DNA analysts, she said.

Stephanie Knewbow, director of Pullman Regional Hospital’s emergency department, said survivors should consider going to the hospital right away if they would like to report a sexual assault. To have a kit tested, survivors must complete an examination within five days of the crime.

“Even if they’re unsure if they’re going to file charges, we encourage survivors to come in because you can always decide later on once you’ve collected the evidence,” she said.

Survivors can be accompanied by a friend, family member or an Alternatives to Violence on the Palouse representative during the exam, Knewbow said.

She said a helpful tool was the change in the statute of limitations.

Before 2019, victims of sexual assault had a certain amount of time, between seven to 10 years, to take criminal action against their attacker. Now, there is close to no statute of limitations for minors and extended time periods for adults.

One major misconception people believe is that survivors will make false reports of sexual assault, she said.

“In my career, I have taken one case where the person reporting it was making false statements,” Lambley said. “We just don’t get false reports. That’s a myth that needs to be dispelled.”