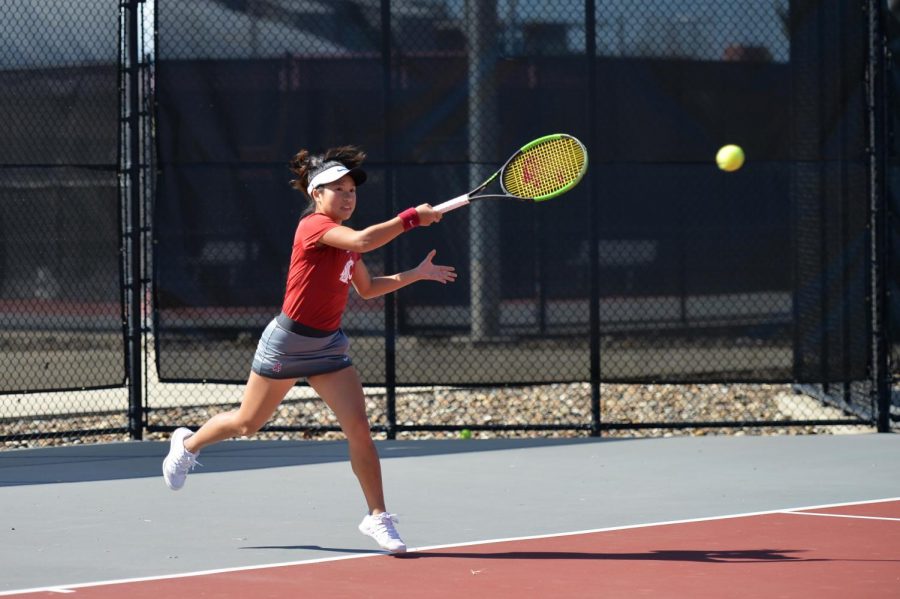 Then-freshman Savanna Ly-Nguyen hits the tennis ball back toward her opponent on Mar. 31, 2019 at the Outdoor Tennis Courts.

The WSU tennis team won 4-0 when they hosted Gonzaga for senior night Tuesday afternoon on the WSU Outdoor Tennis Courts.

Fifth-year Melisa Ates was the lone Cougar honored for senior night. She was recognized for her accomplishments in a ceremony before the game which acknowledged her personal character, talented tennis play, strong academics and community service. It was Ates’ final home match in the crimson and gray.

In the first singles game, Ates’ talent shone as she won in a decisive 6-2, 6-1 against sophomore Jenna Sloan. The Cougars followed up with another quick win as Sato defeated Sosnowska 6-3, 6-2.

WSU continued their winning streak as Bayerlova defeated Ketels 6-2, 6-4. This solidified the victory for the Cougars as they finished with a dominant 4-0 win.

Kumhom’s match against Gonzaga’s Sosnowska went unfinished in the third set when the victory was called.

After the game was finished, senior night continued and cake was given out to those attending the game to mark Ates’ departure. Ates said the fact that the match was held on senior night helped the team to perform their best.

“It was like, in general, an emotional day for all of us, I think the whole team,” Ates said. “I think we did a really good job, like that pumped us up for our last home match.”

Hart was ecstatic that such a strong win marked Ates’ last home match.

“I think it’s a great way for her to end her homestand as a Cougar,” Hart said.

Ates’ win in her final home game elevated her to 194 overall career wins, which tied the all-time wins mark for WSU held by Elizaveta Luzina. Ates has a 16-6 record this season.

Although it will be hard for the Cougars to replace the fierce contender, Hart said she is confident in the younger players’ abilities.

“Our younger players have done a really good job of learning throughout the season and improving on some of the things that they need to improve upon,” Hart said.

The next game for the Cougars will be against conference rival Washington at 1:30 p.m Friday in Seattle.

After that, the Cougars travel to California for a three-match road trip, playing Pepperdine on Sunday, UC Santa Barbara on Monday and San Diego on Wednesday.