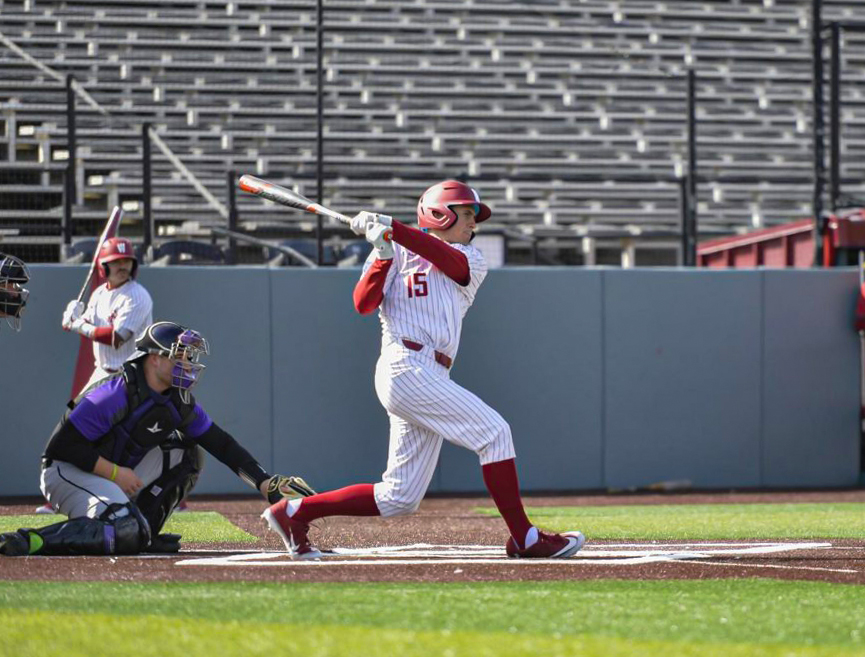 Senior outfielder Gianni Tomasi swings at pitch from the left side of the plate.

WSU baseball looks to end the current homestand on a hot note when they host the No. 16 Arizona Wildcats in a three-game series starting Friday with the series finale on Sunday.

The Cougars (16-12, 4-8) just lost to Gonzaga on Tuesday 9-0 in a shortened game, getting shutout for the first time since they faced Arizona State on March 28.

The Wildcats (21-10, 7-5) are coming off a 5-4 loss to Grand Canyon in extra innings and have now lost back-to-back games coming into this series.

WSU is currently on a five-game losing streak against Arizona, with their last win coming on March 24, 2018, in Tucson, Arizona, winning 5-4 on the road. The Cougars’ last win at Bailey-Brayton Field against the Wildcats came April 8, 2017, winning 9-3 at home.

The last time the Cougars won a series against Arizona was March 14-16 of 2014, where WSU took two games out of three on the road in Tucson.

Head coach Brian Green said the defensive side of the ball needs to step up as the season continues and heads into this upcoming series.

“We’re not playing the defense we need to play,” Green said. “We make too many mistakes on the mound, we throw picks away, just silly, stupid stuff.”

Green said that the team saw a spike in errors committed on defense as soon as Pac-12 play started for them.

“With each week, your competition and your athleticism is greater,” Green said. “Guys are faster, guys are stronger, and as soon as you feel that defensively … you try to do too much.”

Green said this current Arizona team is the most talented team in the Pac-12 in terms of athleticism.

“They’re very balanced offensively,” Green said. “Their on-base percentage is .390 in Pac-12 play … but they’re left and right, and they always hit.”

Green said he wants to use these small wins in the Pac-12, including their series win against Utah, as momentum heading into the next series.

“We’re not playing Arizona, we’re playing against the game,” Green said. “With each week, we have increased belief and we have an increased understanding that if we play good baseball, that we can beat anybody.”

All three games can be viewed on the WSU Live Stream and lineups and starting pitchers will be announced one hour before each game start.