Goodrich is ranked in top 15 for barrel racing, breakaway roping 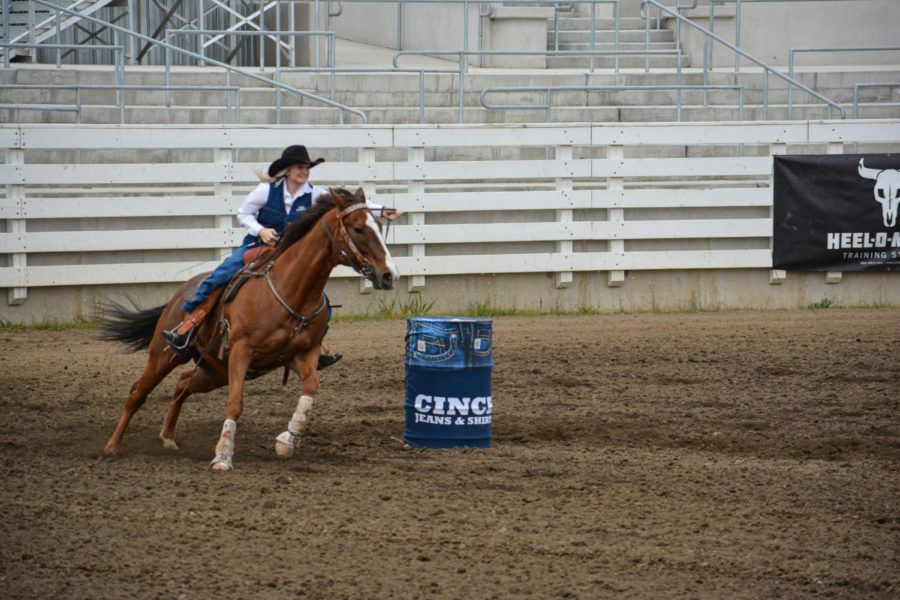 Josie Goodrich, freshman criminal justice and multimedia journalism double major, said her ultimate goal in rodeo is to make it to National Finals Rodeo, where the top 15 people in the world compete.

Even though WSU does not have a rodeo team, one freshman is following in her parents’ footsteps and representing WSU as an independent rider.

Goodrich is currently ranked in the top 15 for both women’s events in the northwest region of the National Intercollegiate Rodeo Association, according to the NIRA website.

Goodrich’s father is her roping coach and her mother is her barrel racing coach, she said.

Goodrich said her ultimate goal in rodeo is to make it to National Finals Rodeo, where the top 15 people in the world compete.

“With professional rodeo, it’s honestly like being in the NFL or NBA,” she said.

Goodrich said she likes the independent events built into the friendly, team environment of rodeo.

“I’m in control of my own success, it’s not like I have to depend on a couple other people to win the game,” she said. “It’s very different than other sports, I would say.”

Mahoney wrote in an email that she has a “rodeo family” she has remained close with during her years of rodeoing.

WSU used to have a rodeo team, Mahoney wrote in the email. However, she does not think the team will start up again anytime soon because WSU’s athletic expenditures are concentrated elsewhere.

Goodrich is doing online classes at home in eastern Oregon. She said she is not sure where she will practice and board her horse once she moves to Pullman for school.

It is difficult to rodeo independently because there are very few adequate practice facilities, and riders who are not part of a team are financially responsible for their horse and equipment, Mahoney wrote in the email.

There was a team when Goodrich’s father rodeoed at WSU, and she said she hopes it will become popular again.

Goodrich said she was not as focused on rodeo when she committed to WSU. Otherwise, she might have chosen a school with an established team.

However, Goodrich said she loves the Cougar pride associated with WSU and enjoys being a part of it.

“I love to represent WSU,” she said. “I’m not doing horrible right now, I’m actually doing pretty good, so I hope I can come out on top and yell ‘Go Cougs.’”