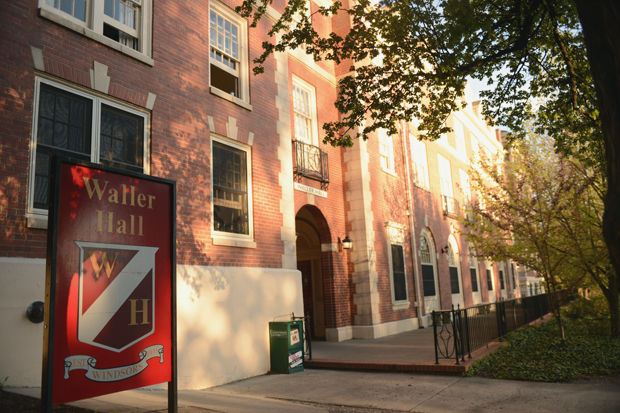 Waller Hall will close at the end of the spring semester. Residents and alumni gathered on Saturday to remember their time living in the hall and celebrate the building's history.

Memories will be all Waller Hall alumni have when the end of the semester arrives. After 80 years, Waller Hall will close and be turned over to the academic department.

Former residents assembled for an alumni celebration to commemorate the positive impact that Waller Hall has made on their lives.

Waller Hall was built in 1932 as all mens hall and was named after Osmar L. Waller, a former Washington State University dean. At this year’s Residential Life Banquet, Waller Hall won the award for Hall of the Year.

Waller’s Duke of Windsor Justin Niedermeyer has carried out his grandfather and uncle’s tradition of living in Waller Hall. Niedermeyer helped coordinate the alumni event.

During the event, Waller alumni and hall government talked about the history of the building and the community it has built over the years.

Waller alumni were able to take a tour of the residence hall, meet with old hall-mates and share memories.

“It has the same aspects of a fraternity, but has a different feeling,” he said.

“It’s led to some long-lasting relationships,” Waller alumni Ethan Green said. “I met my future wife through the brother and sister hall interaction.”

Waller also hosted social activities such as the Blacklight Dance. Niedermeyer said it was the most well-attended hall dance on campus.

Other activities within Waller included swing dancing and fencing, while other traditions such as hall mini golf tournaments have died-off.

“We were trying to build a classy atmosphere here,” Niedermeyer said.

“Just running around campus at night was a lot of fun,” Fortner said. “We tried to strategize, but it always fell through.”

Waller Hall president Will Mellish has lived in Waller for three years. He spoke at the event about the hall’s unique architectural design.

“I just love what they do with the red brick and rolling hills in the background,” Mellish said.

Originally there were plans to renovate the building, but the construction company saw the necessary alterations as being unfeasible.

“The architecture is what will be a shame to lose. I think something will be lost from the WSU community,” Niedermeyer said.

At the end of the event, some of the Waller alumni and current Waller residents serenaded the sister halls for the last time. They also delivered and donated the Waller Hall Windsor Crest to Rico’s Pub to be remembered as a piece of the University’s history.

“It’s good that we get to celebrate it before it goes,” Green said.