Conquer the land with Catan

Game of the week is all about strategy; to win Catan, player must reach 10 victory points 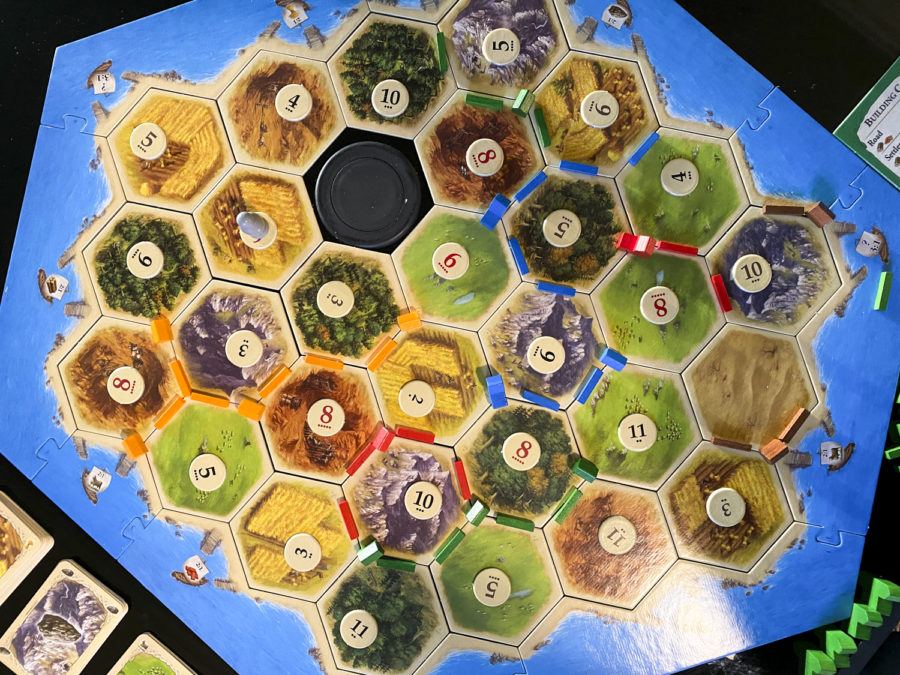 You can either generate the board with an online website, or create your own by shuffling the stack.

Be a trailblazer! Conquer the land and show your friends that you can use your resources the most strategically. If you enjoyed playing Risk as a kid, Catan may be the perfect game for you.

To play Catan, each player must choose a color. The color will set them apart in the game, so settlements, roads and cities don’t get confused between players. Each player is given a card as reference, which tells them how to use different resources.

To create the board, you can use websites such as https://alexbeals.com/projects/catan/ to generate a random variation for how to place the tiles. Numbers are then placed on the tiles, which will coordinate with dice rolls. The more dots a number has under it, the more likely it is to be rolled.

Players then roll for the highest number to see who plays first. Once play begins, it rotates to the left. The first move players make is to place down one settlement, and then play reverses to place down a second settlement. Roads can only run from already put-down settlements.

When a player rolls the dice, if there is a coordinating number next to your settlement, you get the resource the number is on. There is a robber that starts on a desert and can be moved around to block people from getting resources. Resources are needed to accomplish anything in the game.

Players can trade resources during their turns. Any alliances can be made, although you shouldn’t trust your neighbor at any time.

Catan is a great game for a group of friends to play together, although it is not for the faint of heart, as roads can be cut off, deals can be poorly made, and robbers can steal your resources. The randomization of the board keeps the game diverse for every time you play and there are an incredible number of variations. There are pirate themes, barbarian themes and knight themes.

The game is recommended for people 10 years and up, and three or more players are recommended. Catan can be purchased on Amazon for $44.

If you have played this game or play it after reading this article, comment on your experiences down below.