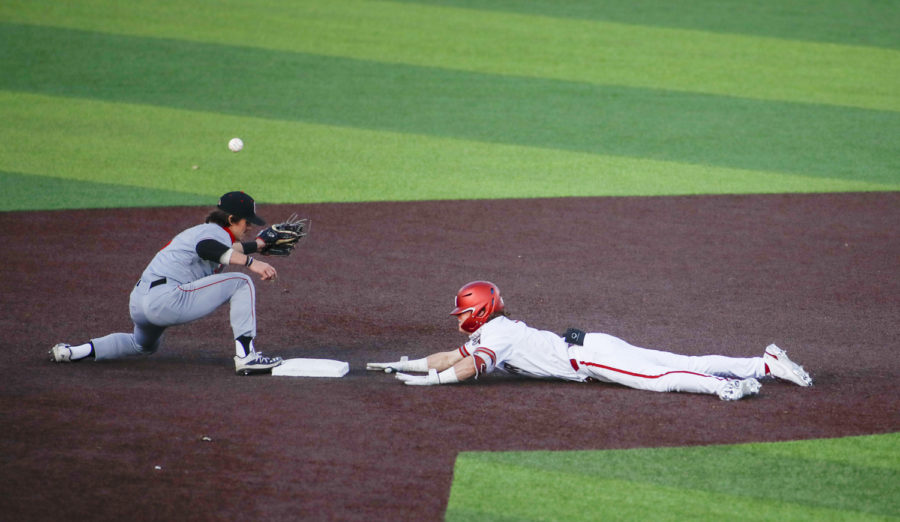 Senior infieder Jack Smith slides into second base against Seattle U.

WSU baseball will look to keep their bats alive when they face the California Golden Bears on the road in a three-game series starting Friday and concluding on Sunday.

WSU has not defeated this Cal team since April 14, 2018, when they won game two of a doubleheader 4-3 in extra innings. The last series win for the Cougars dates to 2015, where they took two out of three in Berkeley, California.

“They’re really left-handed at the plate, they’ve got some really nice arms,” Green said. “We know it’s going to be another great challenge in the Pac.”

Green said this offense is so tight for any kind of wiggle room, in terms of new starting lineups, but he likes what he sees.

“When [Tristan] Peterson is hitting .330 in Pac play and [Jacob] McKeon is .400 and [Justin Van De Brake] is lighting it up right now, and [Collin] Montez, we really have an offense right now where it is really really tough to crack it,” Green said.

The offense showed out this weekend against nationally-ranked Arizona, putting up 21 runs in one game on 23 hits, and in the following two games, scoring eight runs in each game. After putting up zero runs against the Gonzaga Bulldogs last Tuesday, the offense has rediscovered themselves from the beginning of the season.

The pitching staff and bullpen, however, has seemed to be a constant struggle when trying to find out the root problem as to why the bullpen either cannot hold a lead or finish a game strong.

In that struggle, Green said most of his pitchers have been consistent throughout the season but continues to look deep into the bullpen for potential starters.

“[Tyler] Hoeft is just one of those guys who’s a freshman, he’s not scared, his breaking ball is good enough, his change is good enough, he’s got enough fastball, there’s sink on it at times, he’s tough,” Green said. “He’s kinda that guy on Sunday right, you know, either him or [Dakota] Hawkins.”

First pitch from Evans Diamond at Cal is set for 7 p.m. Friday, 4 p.m. Saturday and the series finale is set for 12 p.m. Sunday.

All three games can be viewed on the Pac-12 Networks and lineups and starting pitchers will be announced one hour before game start.