OPINION: State bill on universal health care is advantageous for all residents 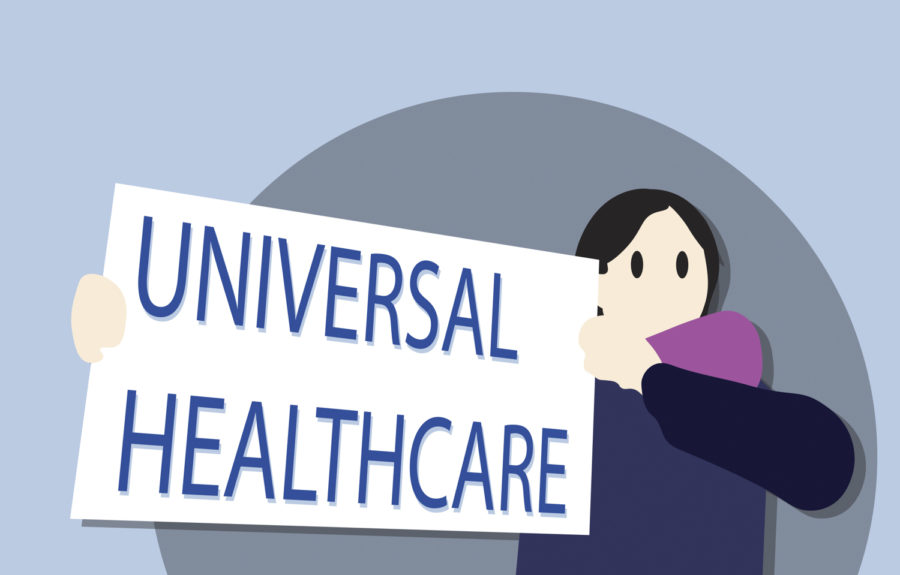 Medical advancements have often been measured by the number of people these technologies, medical procedures and drug therapies are able to save. But along with the benefit of being able to save people, there comes a price.

Over the last century, that price has inflated at the cost of patients and their well being. While the U.S. healthcare system has become more structured over the past hundred years, it went from being unregulated and modestly priced, to being modeled after a perfect market that has privatized health care for consumers who can afford it.

The intentions of healthcare professionals are often altruistic. However, the system they work under is not as transparent in the cost and quality of the healthcare they offer to consumers.

In an article by the American Medical Association Journal of Ethics, it was found that the science and technology of medicine during the era of unregulated health care was characterized as primitive because the knowledge available at the time was severely limited.

The article cited the timeline of major discoveries that impacted medicine at the time, which included the understanding of immunology, bacteriology, and antisepsis.

Along with the increase of knowledge available to physicians and medical scientists came a need for higher standards of quality of care, which would have to come from somewhere.

These medical advancements created an opportunity for insurance companies to make healthcare a business, treating patients as consumers regardless of their socioeconomic status.

More recently, the Washington state senate has brought on a bill regarding the potential creation of a universal health care commission in the state. If enacted, an equitable and affordable health system would be commissioned by 2026.

However, the way this would function in the current economy is left to residents, experts and politicians to ponder. Despite the topic becoming politized, it would bring considerable amounts of benefit to all residents, including those who have insurance, and especially those without health insurance.

An important goal highlighted in the bill is that healthy residents would  be able to contribute to the economic well being of both their families and communities. This would be accomplished by giving them equitable access to appropriate health services. To put it more broadly, the objective of the bill is to overall improve the quality of life for Washingtonians by implementing a universal health care system.

Millions of people lost their jobs because of the COVID-19 pandemic. Along with the impact of the pandemic, several hundred thousand undocumented individuals have had no access to the health care offered by the current health care system — especially during the pandemic.

While people aren’t exactly turned away from health care facilities for being uninsured, the cost alone is enough to drive them away from seeking care unless absolutely necessary.

In order to model the health care systems of the neighboring countries that adopted universal health care, one would need to understand how this would work with the current state economy.

“In most cases, [universal health care is] a single-payer system. It is administered and governed by the federal government. That’s one thing, but it could also be that it is governed by the federal government but actually administered by other groups, like say private insurers,” said Bidisha Mandal, professor at the WSU School of Economic Sciences. “That would just mean a lot more work writing, designing the plan, designing the rules, enforcing the rules, working with all types of health care providers.”

The way this functions in a full universal health care system would guarantee nobody is denied care. Everybody, by default, is eligible to receive care, Mandal said.

“The government doesn’t need to look at your income to say okay you are Medicaid, you are not Medicaid — everybody gets it,” Mandal said. “But the question is, who is actually designing the plan, and who is actually collecting the funds and reimbursing the foreign funds … this [affects] how a country is going to define [their] universal health care system.”

The process to commission universal health care, even in a single state like Washington, is much more complicated than simply implementing a tax on every Washington resident.

It may also be difficult to transition away from this consumer mentality that stems from a strong sense of individuality.

This means the portion of the population who have had private insurance might be more concerned about their own coverage, believing they’re not getting quality care because it’s now publicly funded, Mandal said.

“Just the changing of the mentality and creating a whole system and enforcing it [is] going to be difficult, but it’s not impossible,” Mandal said.

Experiencing the financial detriment of the COVID-19 pandemic allowed people to realize how high the cost of treatment is and how a lack of access to care can keep a person from seeking care at all.

“In 2019, a workgroup was created, and the group was called the Universal Health Care Work Group,” she said. “The bill is about first setting up a commission that’s going to deliver its report in 2024, and then based on that report, universal health care, if at all, would be established by 2026.”

At this point, they are not creating or establishing the system right now. Instead, it’s solely a commission, Mandal said. The work group presented multiple models to be considered by the legislature.

“The work group in their final report suggested three different models of achieving this universal health care, so we don’t even actually know which model would be adopted, or modified or if there will be any other model,” she said.

Model A explains how this universal health care system would be both state governed and administered, so other heath insurance agencies would have no role in the system.

Model B would be state governed, but there will be a role of a private entity, as plans will be administered under this model.

“No matter which model is adopted, in some way it is in universal care that everybody would have access to health insurance, one way or another,” Mandal said.

“[In the current healthcare system] there are three players involved right now: the patient, the provider and the insurer. The goal, at least with Model A, is to take this insurer completely out. So it’s just between you and your doctor, and the state pays for the doctor’s visit at a predetermined price,” Mandal said.