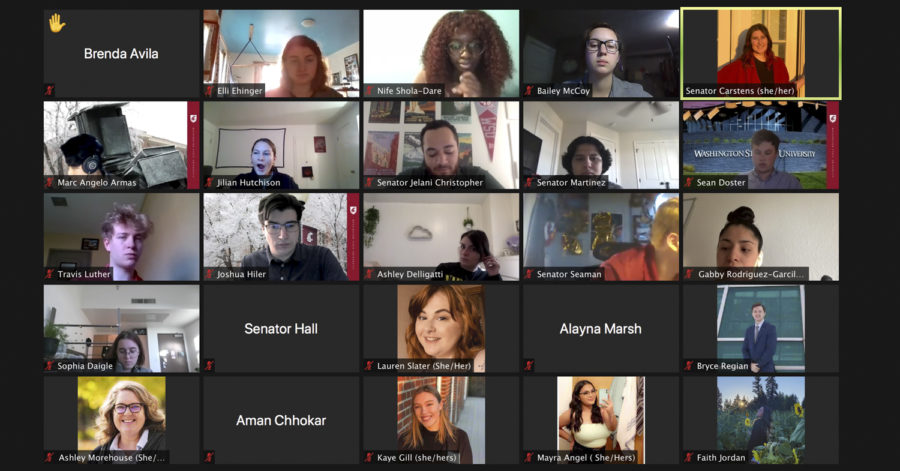 "It is very clear that residence halls on the Southside, which are usually the more economic option for students, have the least security,” ASWSU Senator Brenda Avila said.

Senators will attend a training within six weeks of the start of the fall and spring semesters or of taking office. ASWSU Senator Lauren Slater wrote the bill and said the resolution is a passion project of hers.

Slater said the bill’s intention is to ensure representatives of the student body are educated about how to be an ally to all students.

Learning how to effectively and respectfully communicate with constituents is important, she said.

“My hope with this bill is that we learn how to communicate better and communicate more respectfully with everyone around us,” Slater said. “Even us within the senate, and communicating with the executive as well.”

There is an allyship program in the works, specific to WSU, that will include information about how to be an ally, microaggressions, inclusive language and unconscious bias, Slater said.

During a discussion regarding student safety, ASWSU Senators unanimously passed a resolution calling for an increase in student dormitory safety for the Southside residence halls.

According to the resolution, halls like Orton, Rogers and the Stephenson Complex have the “least amount of security measures that put students at the highest risk of being a victim of sexual assault and robbery.”

Southside residence halls do not have the same caliber of safety regarding non-residents entering buildings, according to the resolution.

ASWSU Senators Jacob Martinez and Dylan Seaman wrote the call to action. Possible solutions for the disparity include implementing a more robust card swipe system, particularly for buildings where people can get in on the side, Martinez said.

Alongside several other ASWSU Senators, Martinez said he will meet with the Resident Hall Association to further discuss details and possible plans to increase safety.

In addition to one’s education, safety on campus should be the highest priority for university officials, said ASWSU Senator Brenda Avila.

“If a student doesn’t feel safe in their home, then how are they expected to do anything else?” she said. “It is very clear that residence halls on the Southside, which are usually the more economic option for students, have the least security.”

ASWSU Senator Jelani Christopher said he agreed there is a definite safety disparity between affordable dorms and expensive dorms on campus.

WSU and ASWSU have a responsibility to ensure student safety, Slater said. Just because someone does not live on Southside does not mean they can turn a blind eye to possible issues in the area.

“I think it’s really important that as we think about our constituents, we think about their safety as well,” she said, “because they won’t succeed in school if they don’t feel safe.”

Christopher said he and ASWSU Senator Oluwanifemi “Nife” Shola-Dare will present the $5 student fee initiative addressing food insecurity to the WSU Board of Regents May 6. WSU students recently passed the initiative during the ASWSU elections April 2.

Shola-Dare said she is excited to make a positive change on campus and is grateful students who are food insecure will have a steady source of support during their time at WSU.