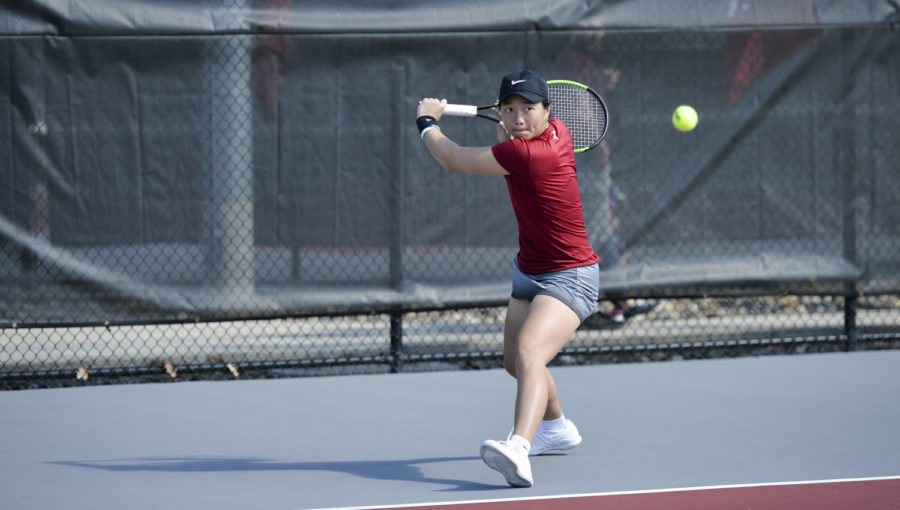 Then-freshman Yang Lee hits the tennis ball back towards her opponent on Mar. 31, 2019 at the Outdoor Tennis Courts.

The WSU tennis team finished up their regular season by losing all four matches in their six-day road trip from last Friday to Wednesday.

The Cougars will now face the Colorado Buffaloes on Friday in the first round of the Pac-12 championships. They will enter that match with an overall record of 13-15 and a 4-6 record in conference play.  WSU is currently ranked eighth in the Pac-12.

In the first match of the road trip, the Cougars faced cross-state rival No. 42 Washington and fell 4-1 in Seattle. With the victory, the Huskies rose to 14-6 and 5-5 overall in Pac-12 play.

Doubles play started with Washington’s Sedona Gallagher and Nika Zupancic defeating No. 82 senior Michaela Bayerlova and junior Yang Lee 6-2.  After that, the Cougars rallied for a victory when sophomore Pang Jittakoat and Freshman Fifa Kumhom defeated Zoey Weil and Tara Chilton 6-4, forcing another game to determine the point.

The Huskies didn’t take their foot off the gas when entering singles play. It started off when Washington’s Gallagher defeated Kumhom 6-3, 6-1.  Shortly after, the Huskies posted another victory when Zupancic defeated Savanna Ly-Nguyen 6-2, 7-5. Then they grabbed a third victory when Sato fell to Fortin 6-4, 6-2.

The Cougars’ lone victory of the day came from Jittakoat, who defeated Chilton 6-0, 6-3. With the game decided in Washington’s favor, the remaining two singles games were canceled.

Despite the defeat, head coach Lisa Hart said that she is confident that the Cougars could beat the Huskies if they face each other in conference play.

“That particular match, you know, just didn’t go quite our way,” Hart said. “But I definitely have a lot of confidence that if we were to play them again, we could definitely win that match.”

After their loss against Washington, the Cougars faced No. 6 Pepperdine in the second match of the road trip. The Waves put up a dominant 7-0 victory over WSU in Malibu, California.

Pepperdine got off to a quick start by winning back-to-back doubles matches to earn their first point of the team match.

Despite the loss of doubles points, Hart thought that doubles play was one of the highlights of the road trip considering Pepperdine was such tough competition.

“I think they’re a really, really great team,” Hart said. “I think we played really excellent in doubles, so I was really excited about that. I thought we competed, and no one gave up.”

In singles, the Waves got right back at it with six straight wins. Shiori Fukuda defeated Ly-Nguyen 6-1, 6-2 to start things off. It followed with Taisiya Pachkaleva defeating Kumhom 6-1, 6-2, Nikki Redelijk defeating Ates 6-2, 6-0 and Jessica Failla defeating Sato 6-3, 6-3.

The final victory for the Waves was when Ashley Lahey defeated Bayerlova 6-3, 7-5. The Waves improved to 12-3 with the match win.

In doubles, the Cougars managed an early victory when Bayerlova and Lee defeated Camille Kiss and Marta Gonzalez-Ballbe 6-3. The doubles point was then tied as Ates and Sato fell to Lise Sentenac and Elizaveta Volodko 6-3.

In the tiebreaker, the Gauchos captured the doubles point with another victory when Kira Reuter and Shakhnoza Khatamova defeated Jittakoat and Kumhom 6-3.

In singles, UCSB got off to a hot start by winning the first two singles matches. Khatamova defeated Kumhom 6-1, 6-0, followed by Kiss defeating Sato 6-1, 6-3.

Despite the early victories, the Cougars weren’t willing to give up the win that easily. Ly-Nguyen defeated Sentenac 6-1, 6-1, then the Cougars earned their second point of the day when Jittakoat defeated Reuter 6-4, 6-3.

The effort wasn’t enough for the Cougars to catch up. UCSB won the match with a victory in the fifth singles game where Volodko defeated Bayerlova in a three-game set 3-6, 6-2, 6-1.

In their final regular-season match on Wednesday, the Cougars headed to San Diego to face the San Diego Toreros. Once again, the Cougars struggled to maintain composure as they fell to the Toreros 6-0.

San Diego captured the doubles points decisively by winning the first two games. Jittakoat and Kumhom fell to Kati Kukaras and Elisabeth Andryukhov 2-6 before Ates and Sato fell to No. 57 Solymar Colling and Elizabeth Goldsmith 4-6.

In singles, the Toreros took the first win with Ly-Nguyen falling to Abigail Desiatnikov 2-6, 0-6. San Diego took every singles win thereafter to clinch the victory and complete the sweep on WSU’s road trip.

Despite the losses, there was a silver lining for the Cougars this week because Ates received the 2021 WSU President’s Award on Tuesday. The award is given to athletes who have demonstrated exceptional leadership and engagement during their time at WSU.

Don’t miss out on the Pac-12 championships when the Cougars take on Colorado at 10 a.m. Friday in San Diego. The match can be watched on the Pac-12 Network.