Tennis faces Colorado in first round 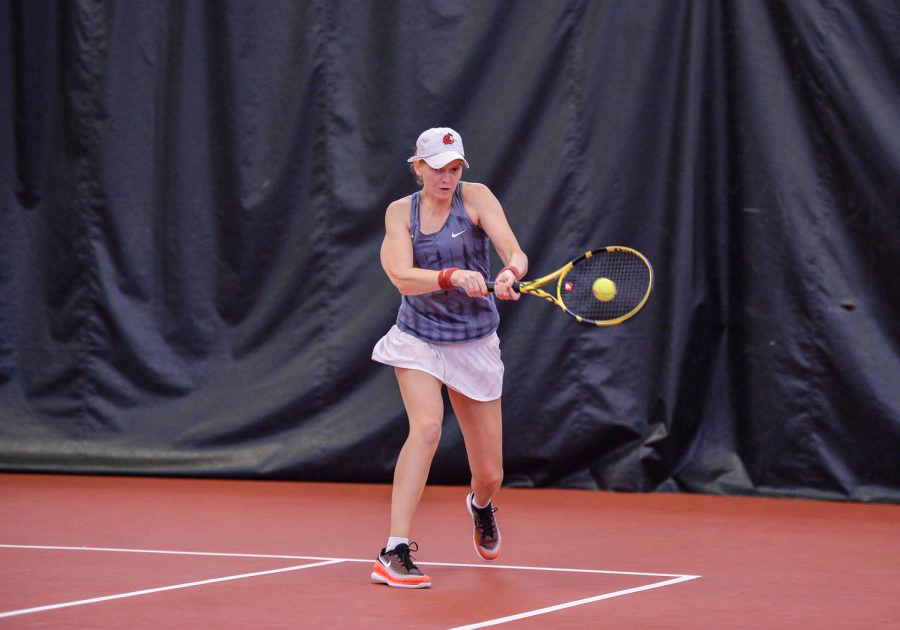 Senior Michaela Bayerlova is ranked No. 78 nationally in the ITA Poll.

WSU tennis has completed their regular season and will now head into the Pac-12 championships this weekend.

The Cougars are seeded No. 8 in the tournament and their first competitor will be No. 9 Colorado on Friday.

The Cougars are coming off some tough losses in their last games of the regular season. They lost the past four matches, most recently against San Diego by a score of 6-0 on Wednesday.

Head coach Lisa Hart said her team is trying to build confidence after their tough losses in their four-match road trip.

“We’re kind of in a tough spot because I feel like a lot of times confidence comes from winning,” Hart said. “Without it, without confidence, it’s hard to get those wins, but I think if we really focus on one ball at a time, one point at a time, one game at a time, one set at a time, I think we can put together some wins.”

In their only matchup this season, Colorado won against WSU 4-3. Hart says that was a match that should have gone in the Cougars’ favor.

“We lost to Colorado, I think in a match that we probably should not have lost the first time around, so I think our players are really excited about that matchup,” Hart said

WSU leads all-time against Colorado by just a smidgen with seven wins and six losses since 2005. Whoever wins the match will face No. 1 seed UCLA at 9 a.m. Saturday.

The strongest contender in the Pac-12 is UCLA, who is ranked No. 5 nationally with a 17-3 record. The UCLA Bruins have two nationally ranked singles players, with Abbey Forbes at No. 8 and Jada Hart at No. 50. UCLA is also nationally ranked in doubles at No. 72 with Hart and Elysia Bolton.

WSU played the Bruins earlier this year in a home match and lost 6-1. Historically, the Bruins lead all-time in wins with a strong 20-2 record.

Although WSU is not ranked nationally, they received votes in the most recent ITA Coaches Poll. WSU has some strong individual contenders, as junior Savanna Ly-Nguyen has a team-best 18-5 singles record so far this season. Her .894 winning percentage currently ranks fourth-best in single-season history at WSU.

Fifth-year Melisa Ates recently broke Elizaveta Luzina’s all-time mark with 195 combined doubles wins. She is closing in on the all-time singles list of 105 career wins. The overall best mark on the singles list is Liudmila Vasilieva with 107.

“I mean if you look at our line up one through six, we can win at any spot on any given day,” Hart said.

Don’t miss out on the Pac-12 championships when the Cougars take on Colorado at 10 a.m. Friday. The game can be watched on the Pac-12 Network.