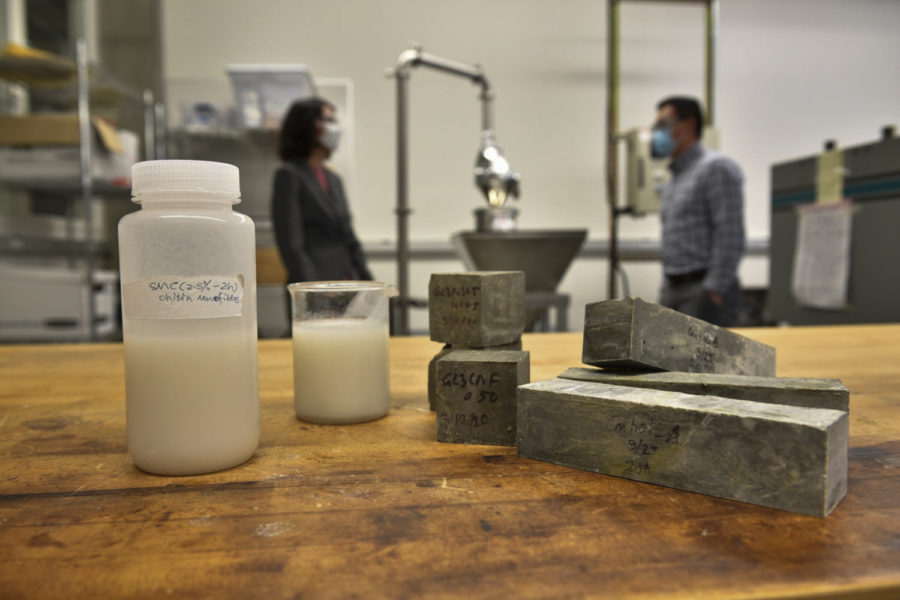 Seafood waste is underutilized and has limited applications. The project will divert the waste toward a useful purpose.

The researchers plan to use chitin, which can be found in seafood shells, to create longer lasting concrete, said Michael Wolcott, research collaborator and WSU associate vice president for research.

“That was an inspiration for us,” she said. “We can use [chitin] in the same way in construction materials because we also want to make them stronger.”

“You will have a structure that is tightly bound and highly organized,” he said.

Nanomaterials, which help add structure to materials, are harvested from chitin and added to concrete to make it more durable, Wolcott said.

“We are not using the [chitin] directly,” Nassiri said. “We are processing it. We are getting a component out of it. That component is what is providing the strength.”

There has been a surplus of waste from seafood shells over the years, she said. Researchers get seafood waste, including crab shells, from industrial processing centers.

Seafood waste is underutilized and has very limited applications. The project will help divert the waste toward a useful purpose, Nassiri said.

“We are definitely helping,” she said. “If [the shell waste] isn’t treated before they’re thrown back into the ocean, they could also throw off the balance of species in the ocean.”

Concrete production is estimated to be responsible for seven percent of carbon emissions globally, she said.

Adding chitin components to cement will not completely eradicate the issue of carbon emissions, but it will create longer-lasting cement and reduce the amount of concrete production, Nassiri said.

Ten billion tons of concrete are estimated to be made per year, she said.

“It is the most used man-made material and the second most used, overall, material after water,” Nassiri said.

The team is collaborating with Pacific Northwest National Laboratory and the Department of Energy, Wolcott said.

The DOE has provided funding for the project because it is looking at ways to reduce carbon emissions, he said. Increasing the stability of concrete will help with this.

Wolcott said he and Nassiri are both collaborating on the project, combining knowledge on concrete and natural materials.

“We are hoping we can get more funding to continue to show that our product works in concrete,” Nassiri said.

The team has been working on the project for about two years, Wolcott said. COVID-19 slowed the project down slightly when the labs were shut down.

The project is still in the early stages of the research but will be finished by the end of 2021 after more adjustments have been made, Nassiri said.

“Our overall goal is to make the same concrete, but use less cement,” she said. “That would be very environmentally beneficial.”