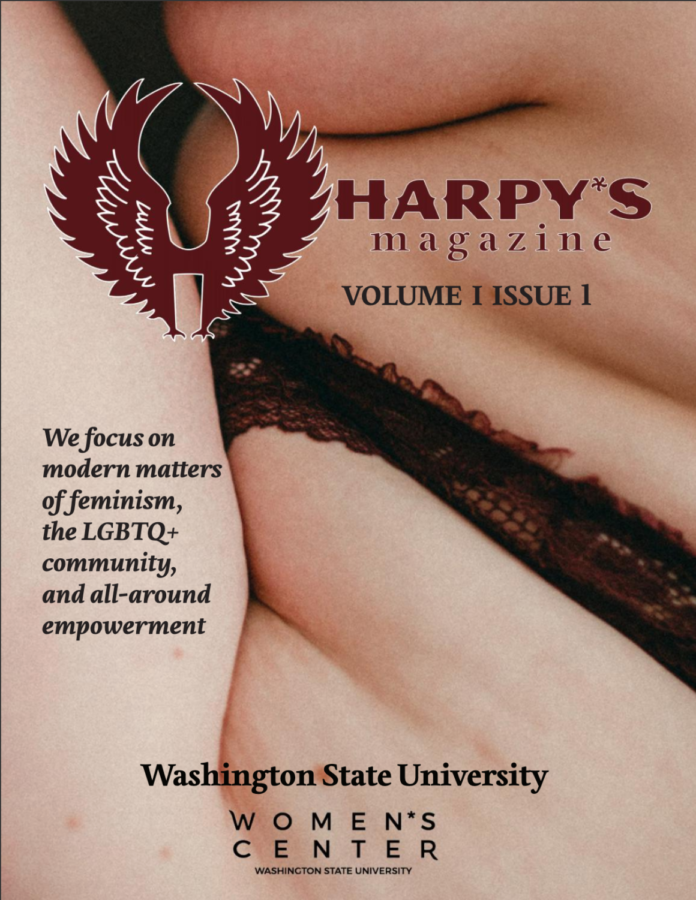 Harpy*s Magazine is a student-run publication and is sponsored by WSU’s Women*s Center. Its first issue was published online December 2020 on Issuu.

The student editors of Harpy*s Magazine are accepting literary and art submissions until May 15 for their second issue, which will be released early fall semester.

The feminist magazine’s theme is “pride” for the fall issue, said Clany Wauran, editor for Harpy*s Magazine and sophomore public relations major. She said they are accepting essays, poems, graphic design pieces and artwork centered around pride in the LGBTQ+ community.

Wauran said the magazine is a student-run publication and is sponsored by WSU’s Women*s Center. Its first issue was published online December 2020 on Issuu.

The magazine’s mission is to amplify student’s voices by challenging patterns of injustice and providing a space for students to discuss those challenges through art, she said. It is also a place where students can celebrate themselves and their identities.

Srader said they were taking a poetry class at the time, so they knew submitting a poem was something they were able to do — especially at the beginning of the COVID-19 pandemic.

“How do I accept my body and still celebrate it in a time where my body needs to protect me?” Srader said. “I’m sedentary at home, at my desk and my apartment … I wanted to capture that and still be able to accept and celebrate what my body can do versus what it cannot do.”

Srader said they felt stagnant and messy. They still feel that way sometimes because they graduate this semester. Their family will not be able to see them walk through graduation, which is hard to accept because they are a first-generation student.

“Being in quarantine has kind of forced me to challenge my own perceptions of my own self and how I have some control over how I see myself,” they said.

Wauran said she is hoping to compensate students who submit pieces for this upcoming issue. She wants to pay contributors $10 or so per piece they submit. Ideally, that would be funded by Services and Activities Fees, which the Women*s Center receives every school year.

About five students sent in written or art contributions for the first issue, Wauran said.

Wauran said she has received two submissions so far for the upcoming issue but is definitely hoping for more. She wants to receive enough submissions so she can choose the ones she wants to put in the magazine.

Srader said they might submit a piece for the upcoming issue because it is the last time they will be able to. If they do, the piece will likely be multiple haiku put together chronicling their years at WSU, specifically how they have come to learn and accept their sexuality and gender identity.

“I like how simple haiku are,” they said. “Because of the simplicity, it can be even more powerful.”

Wauran and her co-editor Zainab Guizani designed the first issue themselves throughout fall semester 2020. Wauran said they both spent about 15-20 hours a week on the magazine.

“We were definitely like a tag team, like, we’re just going back and forth,” she said. “It wasn’t too bad because we split the work, but it was a lot of work.”

Wauran has a graphic design background. She said she would recreate already-existing designs from works like anime covers on Adobe InDesign. Still, she struggled with making sure people would be able to know the magazine’s purpose just by looking at the first and second pages.

Now, Wauran said she is looking for a new co-editor because Guizani is graduating this semester. She is hoping to fill the position, which is paid, before the end of the semester.

Students can submit their literary and art pieces through the magazine’s online form. Other questions about the magazine can be sent to wc.harpy@wsu.edu.