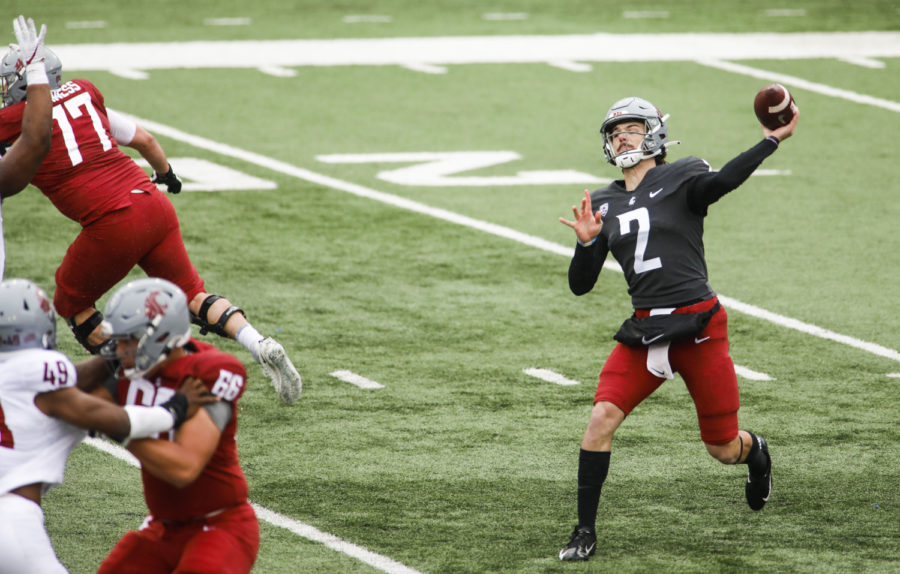 Redshirt junior quarterback Cammon Cooper throws the ball during the Crimson and Gray football game on Saturday at Martin Stadium.

The WSU football team played their annual Crimson and Gray game on Saturday at Gesa Field at Martin Stadium. The Gray team dominated the Crimson team to a 74-37 victory.

After his first spring game at WSU, head coach Nick Rolovich said it was great to have a little bit of a crowd present at the game with the players’ friends and family in attendance.

“I’m glad the parents and families got to see their kids play,” Rolovich said. “It’s been a tough year for these guys. I’m sure it’s going to give them a lot of smiles, a lot of happiness to hug their family members after [the game].”

The Crimson and Gray teams consisted of WSU’s offensive and defensive rosters, respectively. Aside from the normal football scoring system, WSU implemented some fun additions to spice up the points scored during the game. For instance, a fourth-down stop by the defense that results in a punt by the Crimson team grants the Gray team five points.

The Cougars also added in a one-hand touch rule any time the Crimson team’s quarterback possessed the ball. All other ball carriers still followed the traditional tackle rule.

The Gray team tallied four total turnovers throughout the scrimmage and managed to stop the Crimson team from driving up the field numerous times. According to the special rule set, the defense received seven points each time they produced a turnover.

Rolovich said he tips his hat to the defense for the plays they made during the game. Defensive coordinator Jake Dickert said the game showed how energetic their defensive unit is. Dickert said he could feel in the air before kickoff that the game was going to be a fun experience.

“I think the biggest thing it says that they’re buying in,” Dickert said about the defense’s performance in the scrimmage. “We got a group of guys that want to get better together and keep pushing each other. It starts with energy and effort, two things that take no talent.”

Redshirt junior quarterback Cammon Cooper led the Crimson team in passing with 168 yards and two passing touchdowns. Cooper was the only quarterback throughout the entire scrimmage who had a passing touchdown. Cooper also tallied 38 rushing yards on eight carries, which also led all of the quarterbacks who played.

Cooper, along with two other quarterbacks, managed to throw an interception as well. One of those quarterbacks was graduate transfer Jarrett Guarantano.

Guarantano threw just one pass in the first quarter, and it was an interception. Redshirt senior linebacker Justus Rogers picked off the pass in the middle of the field and started the Crimson and Gray game with a seven-point play for the defense.

Rogers said the play was certainly exciting considering it was the first one of the game. However, Rogers more so recognizes the energy that the defense brought to the game and how it led to the considerable win over the Crimson team.

“We’re all one unit,” Rogers said. “We all have different responsibilities on the field, in each position that’s out there, just the bigger picture is that, on defense side at least, we’re just one unit pulling towards the same goal, which is to get that football.”

During the process of throwing the ball, Guarantano’s hand made contact with redshirt senior center Brian Greene’s shoulder pads. This contact took Guarantano out of the game after throwing just one pass.

Guarantano returned to the WSU sideline in the second half and did not appear to have any bandaging or wrapping on his hand. Rolovich said the injury doesn’t seem to be “too serious.”

Cooper found the end zone once in the first half and got his second touchdown in the second half. Redshirt senior receiver Travell Harris caught Cooper’s first touchdown pass in the back corner of the endzone. He said the efforts from Cooper throughout the scrimmage were superb and it shows how much of a leader he can be with the offense.

Freshman running back Kannon Katzer led the Crimson team in rushing yards with 71 yards. He also was the only running back to reach the end zone throughout the scrimmage as he put up two rushing touchdowns. Rolovich and Harris both expressed their admiration for the true freshman in their post-game press conferences.

As the spring game wrapped up, both the Crimson and Gray teams met at the fifty-yard line, lined up, and sung the WSU fight song together. Minutes later, both teams commenced in a water balloon fight on the field.

“That was a great team bond,” Harris said. “We were out there to have fun, put on a show for the fans and enjoy spring ball.”

Looking back on the first spring game in the Rolovich era, he believes the team still has some wrinkles to iron out if they’re going to be where he wants the program to be in the future.

“Tons to work on still,” Rolovich said. “But as long as the culture and the mentality are right, we’ll have a chance.”